Dani Rodrik provides us the introduction to a new paper (co-authored with Arvind Subramanian), “Why Did Financial Globalization Disappoint?” which argus that financial liberalization. meaning making their economies more open to international capital flows, has not been a boon for developing economies. It has not produced not better growth and has increased volatility (think of what those hot money inflows and outflows have done to some emerging markets).

What Rodrik focuses on, and will be the theme of this and the next two posts, is the powerful and often neglected role of assumptions and mental constructs in problem solving and policy formation. To grossly simplify Rodrik’s and Subramanian’s investigation, development economists made overmuch of the fact that developing economies would need investment in order to grow. That was also a convenient way to frame the problem, since international development agencies can hand out dough or arrange loans. Moreover, some institutions also helped young economies create capital markets (one example: the World Bank’s International Finance Corporation).

This chart from the paper shows the results by graphing the relationship between financial liberalization and growth in developing countries, 1970-2004 (click to enlarge): 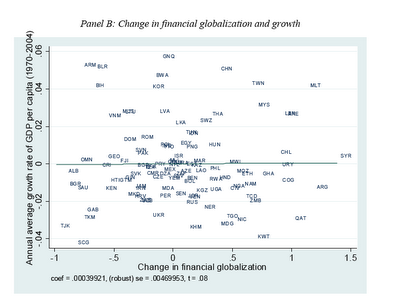 As Rodrik explains, the flaw in the logic is that while capital may have been a constraint, in many cases it was not the binding constraint. In many emerging economies, investment is low because how to get a decent economic return isn’t obvious (think of many African nations). Making these countries good targets for foreign capital requires working on other axes: reducing corruption or improving the legal system; educating the workforce; perhaps more infrastructure investment (roads, communications, a more reliable electrical grid). This is far from a complete list, but the point is that allowing more foreign investment can wind up putting the cart before the horse.

In some ways, this large-scale, not very successful experiment in financial globalization was a form of wishful thinking dressed up in economic rigor. And what is worrisome is that if a line of though is appealing for ideological reasons (in this case, it conformed with conventional wisdom and pointed to a comparatively straightforward course of action) it is remarkably resistant to challenges until the counter-evidence becomes overwhelming.

{Referring to the title] ‘Cause let’s face it, it didn’t. It didn’t boost investment and growth in emerging market economies; it led to increased volatility; and it played an important supporting role in the current subprime mortgage mess.

I have a new paper with Arvind Subramanian which scrutinizes the reasons. From the introduction:

What these findings reveal are the shortcomings of the mental model that dominated thinking about capital flows a decade ago. This model had two key premises. First, it presumed that low savings and weak financial markets at home were first-order constraints on economic growth and development. Thus greater access to investible funds from abroad and improved financial intermediation would provide a powerful boost to domestic investment and growth along with better consumption smoothing. Second, while it recognized the potential of adverse interactions between lenders’ incentives abroad and borrowers’ incentives at home, it assumed that sufficiently vigilant prudential regulation and supervision could ameliorate the attendant risks sufficiently. Indeed, given the presumed importance of access to international finance, this model required that policy makers give very high priority to the implementation of appropriate regulatory structures.

In brief, the argument was this: (1) Developing nations need foreign capital to grow. (2) But foreign capital can be risky if they do not pursue prudent macroeconomic policies and appropriate prudential regulation. (3) So developing countries must become ever more vigilant on those fronts as they open themselves up to capital flows. This syllogism remains at the core of the case for financial globalization (e.g. Mishkin 2006), even though, as we shall see, some newer arguments have begun to take a different tack (e.g. Kose, Prasad, Rogoff, and Wei). But the syllogism relies heavily on a premise that is by no means self-evident. Certainly the results of Prasad, Rajan, and Subramanian (2007) and Gourinchas and Jeanne (2007) are at variance with the presupposition that poor nations need foreign finance in order to develop.

To make sense of what is going on, we need a different mental model. We must begin by taking note of the fact that developing countries live in a second-best world, which means that they suffer from multiple distortions and constraints. While some nations may be severely constrained by inadequate access to finance, others—and perhaps a majority—are constrained primarily by inadequate investment demand, due either to low social returns or to low private appropriability. As we shall argue below, targeting the external finance problem when the “binding constraint” lies with investment demand can be not only ineffective, it can actually backfire. In particular, capital inflows exacerbate the investment constraint through the real exchange rate channel: the increase in the real exchange rate which accompanies capital inflows reduces the real profitability of investment in tradables and lowers the private sector’s willingness to invest. The result is that while capital inflows definitely boost consumption, their effect on investment and growth is indeterminate, and could even be negative. The flat investment profile that most emerging market economies have seen since the early 1990s—compared to their experience prior to financial globalization—can be understood in these terms. The exceptions are countries such as China, India, or Chile that have managed to prevent real exchange rate appreciation for a sustained period of time thanks in part to their reliance on capital controls.

Furthermore, government capacities are limited. Priorities have to be selected carefully since not all distortions can be removed simultaneously. The emphasis on strengthening financial regulation and governance, demanding as it is even in advanced countries, is particularly challenging in countries that are struggling with problems of underdevelopment. Confronting this challenge, and paying up the implied opportunity costs, makes a lot of sense if what one gets in exchange is a big boost in growth, as would be the case when the binding constraint on growth is access to external finance. But otherwise, exhortations on prudential regulation serve little purpose other than reveal the professional limitation of every specialist: insistence that the government undertake all the complementary reforms that would ensure the success of the specialist’s policy recommendation, and indifference to the trade-offs that might arise from the needs of more urgent reforms elsewhere. (Footnotes omitted)

The paper does two things. First, it evaluates and critiques the latest generation of work in favor of financial globalization–mainly the writings of Rick Mishkin, Peter Henry, and Kose, Prasad. Rogoff, and Wei. Second, it argues that we need to understand the difference between saving- and investment-constrained economies in order to make sense of financial globalization. In investment-constrained economies–where investment is low not because of poor access to credit but because of low perceived return–capital inflows are at best ineffective, at worst harmful.