Here we go again. Even though equities are theoretically forward-looking (Barry Ritholtz has pointed out that that ain’t as true as most people believe), bonds are more often the canary in the mineshaft, typically going into a funk before stocks do. Even though the credit markets started getting the heebie jeebies in early June and went into panic mode last August, the S&P 500 reached its peak for this cycle in October 2007. We’ve taken note of the equity-credit market disconnect before (see here and here), and on those occasions, stocks have come to share the downbeat view of debt investors.

Thursday, for instance, equities, and in particular financials, rallied because a trade industry group relaxed rules on that may have the effect of lowering interest rates on larger mortgage loans, such as jumbos from Fannie and Freddie.

But the credit market behavior on the whole was far from pretty. Most worrisome was a spike in agency spreads to 215 basis points, not far from the 22 year high level of 238 basis points reached in February that set in motion the acute phase of the crunch that culminated in the Bear bailout. And remember, that spike in agency spreads occurred BEFORE the creation of the TSLF and the PDCF, both of which were to help reverse the spike in agency spreads. And now we have the government standing behind Fannie and Freddie while trying to pretend that the commitment is limited and won’t cost much (yes, Virginia, there is a Santa Claus; it’s only a majority of economists surveyed by the Wall Street Journal who believe that the Feds will have to bail out the GSEs).

So let’s get this straight: the Fed has created a whole raft of facilities that will take agency paper to prop up that market, Congress has passed a bill that allows for the agencies to get direct government support, and yet agency spreads are approaching the crisis levels BEFORE any of these measures were put in place.

Similarly, banks are finding it hard and costly to raise dough. I happened to be included in a dinner hosted by a major US financial firm to thank a Japanese bank from lending it a very large chunk of two year money. I was told in no uncertain terms that funding from six months to two years is costly and scarce. No bank wants to go too far out beyond the range of the new Fed facilities.

Citigroup’s issue proved that access is very expensive. The new issue was sold at a yield spread of 337.5bps over the 5-year Treasury. Prior to the announcement of the new issue, Citigroup’s 5.5% bond due in April 2013 was bid at +275. Since the 5.5% bonds have approximately the same maturity and seniority of the new debt, its yield spread is directly comparable to the new issue. Hence the difference in spread levels means that Citigroup had to pay more than 60bps in extra yield in order to find enough investors to buy their debt. Not good.

This highlights some very telling facts about today’s market. First, this is an extreme concession for a plain vanilla debt sale of a Aa3 rated bank. In 2006, the concession might have been 5 or 10bps at the most for a new issue. Alternatively, Baa-rated Deutsche Telecom recently brought a new 10-year issue, and the concession was around 15bps. This tells you that while there are buyers of Citigroup debt, they pretty much have to give it away.

The 275 bp spread on a five year seasoned issue for an Aa3 credit isn’t chopped liver either.

Why are the credit mavens skeptical about banks when equity investors think the worst is past? The cynic in me thinks it might be because the green eyeshade credit types are doing their homework.

A number of factors (historical price trends, the ratio of house prices to incomes and rental prices, the futures market, the trajectory and duration of past housing downturns) suggest that the peak to trough decline in housing prices will be in the 35% to 40% range. And there seems to be no signs that things are getting better. From Bloomberg:

Existing U.S. home sales fell to a 10- year low in the second quarter and the median price for a single- family house dropped 7.6 percent as the real estate recession deepened.

The median price tumbled to $206,500 from $223,500 a year earlier, the Chicago-based National Association of Realtors said today. Sales of single-family houses and condominiums fell 16 percent to 4.913 million at an annualized pace….

“It’s getting worse,” Rick Sharga, RealtyTrac’s executive vice president for marketing, said in an interview. “The number of properties that have been foreclosed on by the banks and still haven’t sold is the highest we’ve ever seen.”

Another Bloomberg piece put paid to the notion that markets that had not participated in the bubble would show little price deterioration:

The good news in the worst housing slump since the Great Depression is that the market in Cleveland is recovering. That’s also the bad news.

The Cleveland area led the nation for home price gains in April and May with an 18 percent jump in the lowest price tier of the S&P/Case-Shiller home price index after values fell to levels last seen in 2000. The median home price was $117,500 in the second quarter, 15 percent higher than the prior three months, the National Association of Realtors said in a report today.

A housing revival in this city of 438,000 on the shore of Lake Erie may portend deeper drops in U.S. markets. Prices for entry level homes in Cleveland had to tumble 37 percent from a September 2005 peak to an almost 11-year low in March before enticing first- time buyers.

Cleveland is only one data point, so it may not be valid to generalize from it. While its sharp rebound is encouraging for other cities that were not part of the mania, the depth of its decline is still troubling.

Another factor, again anecdotal, is the number of readers who have written in comments that they have gone bottom fishing and seen nothing worth buying. The reason, almost without exception, is that the houses owned by banks are in such bad condition on the inside as to be near-teardowns. If this is true, the real estate rebound in Cleveland may also not extend to bank REO.

Stepping away from banks, let’s consider the other reasons to question the idea that stocks have turned a corner:

The fall in oil prices and the dollar rally are due to economies in the rest of the world weakening (today’s Wall Street Journal has a long-form treatment). This bodes ill for exports, the one sector of the economy that was doing well. And long term, the dollar is destined to resume its slide, but the long term may be some time in coming (my bet is when the Fed gets serious about reflating).

The Fed is still in a box policy-wise, despite the commodity easing. Unless prices deteriorate further (as in back to late 2007 levels), the pressure will be on the Fed to Do Something About Prices, even though, with advanced economies either in or on the verge of recession, raising rates in OECD nations will not have much impact on demand for raw materials coming from China and other developing economies. And the banks still have a big-time recapitalization problem; a steep yield curve is a big subsidy, and raising short rates would undermine that program.

As we have discussed elsewhere, the US needs to delever. Deleveraging means less consumptions and more saving, and it is also deflationary. And we aren’t the only ones who went overboard on debt, per this chart from BBVA (click to enlarge): 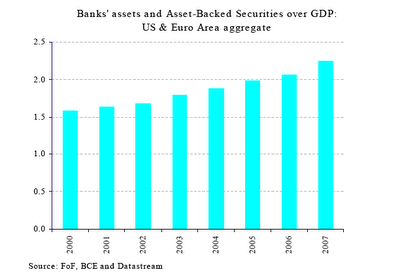 The scaling is less dramatic than it could be, but the bottom line is the same. Consumer spending is certain to remain weak or decline further as they trim their debt levels.