The Baltic Dry Index, which some use as a proxy for the outlook for global manufacturing, has been falling since late June, not long before the commodities bubble burst in July, and has been in retreat since then. What is particularly worrisome is its steep dive in the last two days, despite Herculean efforts to get the banking system operational.

The Guardian article suggests that the culprit may be a rapid deterioration in the Chinese economy, but we are concerned that another factor may be at work that the financing of trade is seriously impaired. in our post “International Trade Seizing Up Due to Credit Crisis,” we cited reports that banks are refusing to honor letters of credit from other banks. If this persists, international trade will break down.

Update 8:40 PM A couple of readers in comments pointed out that BDI is volatile and has been at lower levels in the not-too-distant past. We have mentioned the volatility of BDI in past posts, as well at the fact that it has as often as not given false positives regarding coming economic slowdowns. The flip side is that the BDI also has a weak seasonal pattern, with volume often but not always falling sharply towards the end of the year, although in past years, the deterioration has come a bit later.

The Baltic Dry shipping index, which has been flashing amber signals about the world economy for the past couple of months, is telling us there is something going badly wrong because it is now stuck firmly on red.

The index has long been seen as a good leading indictor of future economic production levels because it charts the cost of freight movements in 26 of the world’s biggest shipping lanes of “dry” materials, such as coal, iron ore and grain which feed into the production of finished goods some weeks or months ahead.

Think back to the first part of the year and there was a boom in oil and commodities prices, which pushed up demand for the ships to carry them. Now we seem to be stuck in the bust phase. We know that oil and commodity prices have fallen sharply because demand has faded in the face of high prices and because the world economy is being deflated by the global financial crisis.

There is some hope today that the worst of the financial crisis may be over, thanks to the mass injections of capital into banks by governments in Europe and the US. But the damage to the world economy is already a fact of life and the Baltic Dry is pointing to a further slowdown in both output and inflation in many of the world’s economies.

The index may also be telling us something scarier. It may be telling us that the world’s great industrial powerhouse, China, could be in trouble and that its imports of raw materials are collapsing at a far greater pace than the slow slide in demand from the West for China’s finished goods would imply.

There have been increasing concerns about China this year. It has been booming for years and growing, if the official figures are to be believed, at more than 10% a year. That has, in turn, given rise to a stockmarket and housing market boom which now look to be going pop, as ours have done.

The great Asian miracle economy might now be coming apart at the seams, in spite of the official figures suggesting everything is stillfine. But the Chinese authorities cannot control the Baltic Dry.

This chart from Bloomberg does not include the 8% fall today, but it illustrates the magnitude of change (click to enlarge): 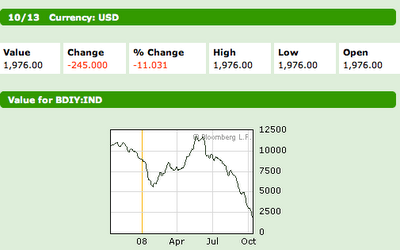 Update 8:40 PM: Reader FairEconomist found this five-year BDI chart less worrisome because it showed that we have not breached not-too-long-ago lows. But that may not be the case, since (as noted in the original post) it does not include the 8% fall today, and the trajectory is unprecedented in recent history. Each to his own reading! 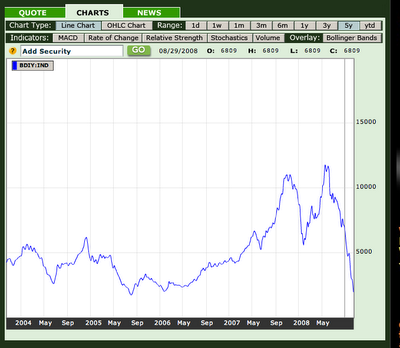