In case you are starting to look to past crises for clues as to how our financial mess might play out, here is a Great Depression factoid. From Levy Forecast, November 2008 (hat tip reader Scott, no online source): 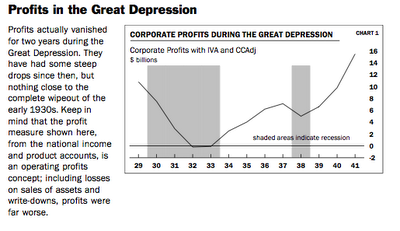 Note that the report itself argues that the US will have a “contained” depression, with deep recession conditions for a protracted period and an anemic recovery. It does not believe the zero operating profits pattern of the Great Depression will be repeated.