Zero Hedge regularly gets visits from the SEC and FINRA, and we can only hope they are taking some of the troubling behavior we have identified seriously. Today’s case looks like a clear regulatory violation.

A few weeks ago I noticed Merrill Lynch/Bank of America on an epic quest to underwrite equity follow on offerings for a vast majority of the lowest quality REITs including Kimco, ProLogis, Duke Realty and others. I say lowest quality, because Merrill’s own analysts had a Sell rating on these names as recently as March 31 (for Kimco) and January 6 (for ProLogis). How the global economy has really changed for the better of REITs since then is still a mystery to me. But I digress.

Yet, as much as I want to keep focusing on Merrill Lynch, it is another company that piques the interest on this occasion. The company at hand is smallish Wachovia, which, at least, in theory does not exist anymore as an entity separate from its recent acquiror, Wells Fargo.

First, I present the back cover page of the WRI prospectus through which Weingarten Realty sold 28 million shares at $14.25, where one can clearly see the prominent role of Wachovia/Wells Fargo. 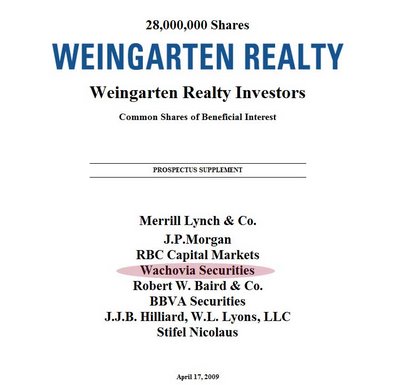 Also don’t let the date on the prospectus fool you: the formal dilution press release announcement came out at 4:13 pm on April 16.

Why is this relevant: As the prospectus itself says in the Use of Proceeds section: “Affiliates of Merrill Lynch, Pierce, Fenner & Smith Incorporated, J.P. Morgan Securities Inc., Wachovia Capital Markets, LLC, BBVA Securities, Inc., and J.J.B. Hilliard, W.L. Lyons, LLC are lenders under our unsecured credit facility and will receive a share of the net proceeds from this offering used to repay borrowings under the credit facility proportionate to their respective commitments under the facility.“

How much longer will banks keep offloading their REIT credit exposure to unwitting equity investors? Yes, the i’s are dotted with this terrific one sentence disclaimer, however we don’t get it. If these companies are such great and worthwhile investment prospects, why are banks rushing to offload their credit exposure, which by the way is the least risky part of the capital structure, while investors are buying equity to pay down the banks credit exposure, and taking on the first-loss risk in the balance sheet? The use of proceeds in every single REIT follow-on offering has been to pay back the banks that have underwritten it. Is it that complicated to see this for the bait-and-switch it is?

Zero Hedge tries to preserve investors what little capital they may have left. However, some just seem hell bent on throwing their money into the CRE fire pit.

But I digress… again. Back to Wachovia. As readers can recall, Zero Hedge had some heartfelt words for Merrill analyst Schmidt, who the day of the ML/BofA offering, decided to upgrade Kimco stock from a Sell to a Buy. Ok, one can structure conspiracy theories about this event, but for all intents and purposes it is not outright illegal… regardless of how many Ambien CRs said analyst has to take at night to sleep soundly. However, taking a look at the WRI offering, some much more serious questions come to mind: like does Wachovia/Wells Fargo have a compliance department and is it aware that its REIT analyst is issuing an upgrade on the stock, a day before Wachovia/Wells Fargo will issue stock in the upgraded company in order to repay Wachovia/Wells Fargo’s credit facility.

The facts: on April 15th, a day before the WRI stock offering, Wachovia/WF analyst Jeffrey Donnelly, CFA, releases an upgrade report on WRI with the following title “WRI: Upgrading To Market Perform, More Confident In Capital Plan Raising Estimates On Possibility Of Shallower Near-Term Trough.” Donnelly had downgraded the stock to a Sell a mere two months prior, on February 23, providing a 2009 FFO target of $2.25/share (his upgrade, as seen below, upward adjusts his 2009 FFO target by a whopping 7 cents to $2.32/share which in any book is worthy of an upgrade). 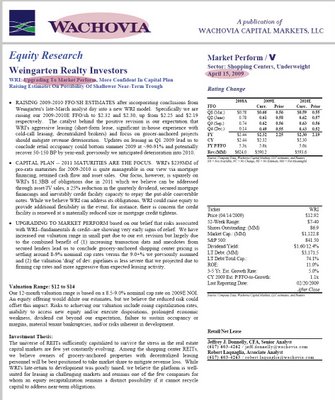 It is unfathomable how Mr. Donnelly would not be restricted by his compliance department, by his research supervisor and by his capital markets desk from publishing a material, stock moving report 24 hours ahead of a follow on offering in which his bank is a key underwriter. The first rule for any sell-side analyst is do not publish research reports that could get you in hot water with the regulators. Wachovia squarely broke that rule. The only logical (and legal) explanation is if the WRI offering was put together so haphazardly and hurriedly, that the bank really had no idea it would be an underwriter until the day of the offering and thus did not even give Donnelly the change to get restricted. Of course, this possibility only spells doom for any investors who got caught in the manic rush to catch the last minute window of capital markets access as underwriters were scrambling to allocate share blocks to their respective syndication desks, knowing full well the window would close within hours (not days) and the stocks would come tumbling down. However, both possibilities reside strongly in the ethical twilight zone, with the first one likely being so in the legal zone as well. It is, again, shocking, that Wells Fargo’s compliance team did not catch this report before it came out, as its publication will inevitably cause serious headaches for all parties involved, especially if WRI stock proceeds to crash over the next several days and the class action lawsuits start trickling in.

Adding insult to injury, WRI management itself came out on April 17th and stated that it now expects its 2009 FFO (see above) to be in the $1.83-$2.06/share range, after giving effect to the offering (yes it is diluted, and yes it is a about 20% lower than Donnelly’s $2.35/share target, serving as the basis for his upgrade report).

And of course it doesn’t end there.

JP Morgan and Wachovia announce yesterday they are doing a follow on offering for Regency Centers Corporation, another small REIT. What is the use of proceeds? Yup, you guessed it: “We intend to use approximately $205 million of these net proceeds to repay outstanding indebtedness under our line of credit. Our line of credit matures in February 2011 and currently has a variable interest rate equal to LIBOR plus 40 basis points, which as of April 17, 2009 was 0.96%.”

Zero Hedge wonders yet again, just which banks benefit from new investors parting with their money so that banks can minimize their secured credit exposure to yet another REIT. Come to think of it, it is about time FINRA and the SEC did too.