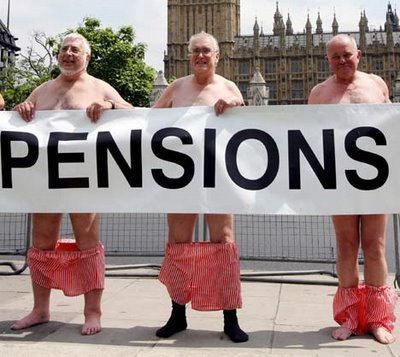 Writing in the Financial Post, Stephen Donald, a consulting actuary with Buck Consultants, reports on the pension killer:

When I started my career in 1973, the economy promptly went into a recession. The S&P 500 fell 48% and took four years to get back to break-even. At the end of 1973 near the market peak, Warren Buffet said he could not find any stock bargains and returned investors their money. Companies had large deficits in their pension plans and had to start making large contributions, and that was before solvency funding! 2009 is déjà vu with the average solvency-funded ratio below 70% and many large well-known companies on the brink of chapter 11 bankruptcy. How did pension plans get into this mess?

Back in the ’70s, actuaries assumed conservative discount rates at least 1% less than expected, and this represented a margin in the order of 20%. At the same time, the market woes of the mid-’70s resulted in large company contributions going into their pension plans. Then we had a string of remarkable investment returns, and in the early ’80s pension plans returned to surpluses — and large ones at that. Some plans were wound up for business reasons and, to the shock of those companies, trust laws were interpreted by the courts such that the surplus belonged to the members.

Actuaries had unwittingly contributed to this situation by acting in a prudent, conservative manner. Prudent funding calls for the deliberate build-up of surplus during the good times to be used in the bad times. But this only works if you retain access to that surplus. From that point on plan sponsors were unwilling to fund on a conservative basis. The thinking was that it would be better to fund the minimum knowing that bad times would require large contributions — it would be an improvement over the risk of carrying large inaccessible surpluses.

Plan sponsors owned the deficits while plan members owned the surpluses. Calls from various sources went out to the provincial governments to change the legislation but to no avail. This lack of action on the part of the provincial governments is the single most important cause of our pension funding problems today.
Through the Income Tax Act the federal government also restricted surplus by effectively limiting surplus in mature plans to 10% of the liabilities. In spite of setting aggressive assumptions, many plans still ended up with surpluses and as soon as these hit 10% no further contributions were allowed.

For 20 years during the 1980s and ’90s, interest rates were high and investment returns were double-digit — it was a remarkable period for pension plans. Gradually, plan sponsors increased their assumed discount rates in their valuations to 8% and higher. This basically cut pension costs in half and companies that didn’t do the same were at a competitive disadvantage. There was tremendous peer pressure on companies, actuaries and plan members (unions) to follow suit. And after 5 to 10 years of this you risked ridicule if you were still using a discount rate of 5%.

Permanent improvements to plans were implemented in this era of falsely cheap pension benefits. Plan sponsors are now realizing that cutting back on these benefits is very difficult and, if done on a prospective-only basis, will take many years to have significant impact.

Historically over the long term, stocks have significantly outperformed fixed income assets, so the common asset mix of pension plans has been 60% equities, 40% bonds. While long-term bonds are similar in nature to pension liabilities and therefore rise and fall at the same time, stocks do not. With stocks, the value of the liabilities can go up at the same time as the stock market drops. With a 60%-40% asset mix, prudence would dictate a margin of at least 30%, but that ran smack into the Surplus-Deficit Asymmetry conundrum discussed above.

Plan sponsors had two choices. They could retain the 60%-40% asset mix but fund at the minimum and run the risk of deficits in market down turns. Most of them never believed that their companies would ever go bankrupt and so they did not think they were putting their members’ financial lives at risk.

Or they could invest solely in fixed income assets. This removed the asset-liability mismatch and resulting windup risk but it also meant lower long-term investment returns. Lower returns meant either increased contributions in the order of 30% or 30% lower benefits or some combination thereof.

Peer pressure and follow-the-herd thinking caused virtually all companies to choose the 60%-40% asset mix with no or very little margin.

The combined impact of the forces above is that pension plans entered one of the worst economical downturns in history with no safety margins whatsoever. But the same thing happened in other areas. Once-proud companies that have been around for 80 years or more are suddenly on the verge of bankruptcy — they also entered this economic downturn with no significant reserves. In less than a year they are lined up for bailouts. The Canadian banks are one of the few exceptions and that is thanks to regulations imposed on them, not to the prudent wise actions of their management.

Pension plans have an investment horizon of 50-plus years, so it is hard to argue that they should not invest in stocks. If they do, then safety margins must be incorporated. But for this to work, the provincial governments have to change once and for all the surplus ownership rules — until that is done there will be no solution to the decline of defined benefit pension plans.

Bernard Dussault, Senior Research and Communications Officer at FSNA and Canada’s former Chief Actuary, was kind enough to send me his simple (federal-provincial) proposal which he submitted to Mr. Menzes on the solvency issue:

As you know, when I appeared as an expert witness at the first federal meeting on pension consultations March 13 at the Old City Hall in Ottawa, I made a 15‑minute (attached) presentation on behalf of FSNA for the promotion of a specific Canada Pension Plan (CPP) expansion. I had then considered also presenting a proposed solution with respect to avoiding a repetition of the solvency issue that currently affects most, if not all defined benefit (DB) pension plans in Canada, be they registered at the provincial or the federal level.

However, I was constrained on March 13 not only by time but also by the fact that I could not speak on behalf of FSNA regarding my proposed solution to the solvency issue because this proposal had not been submitted for approval to the FSNA’s National Board of Directors.

Therefore, I am hereby submitting on my personal behalf for your consideration my idea of a simple, effective and harmless solution to the solvency issue that received most of the attention at the March 20 and March 27 federal meetings, respectively.

The proposed approach would deal only with eventual (but not existing) deficiencies. Under the current Income Tax Act (ITA), the assets of a DB Registered Pension Plan (RPP) may not exceed its actuarial liabilities by more than 10%. This rule exists to ensure that RPPs do not overuse the favourable income tax deferrals applying to DB RPP contributions. The objective of the rule is sensible but its application does not prove appropriate for at least the following two reasons:

Proposed solution to the solvency issue

(a) The ITA 10% limit should be repealed and replaced by a requirement that any emerging surplus or deficit revealed by a triennial statutory actuarial report be amortized over a fixed period of 15 years.

(b) Moreover, whenever the funding ratio (i.e. assets divided by actuarial liabilities) of a given DB RPP would be less than 100%, the underlying pension debt (i.e. liabilities minus assets) shall be backed up on a first priority basis by the pension plan sponsor’s assets until the funding ratio returns to 100%.

(c) Furthermore, contribution holidays would not be permitted under any circumstance.

Effect of the proposed solution:

Mr. Dussault also provided me with his thoughts on Tuesday’s pension hearings:

1. In his article, Jonathan Chevreau states “The CPP itself is like a DB plan in terms of benefits assured to retirees, even though it’s really a Pay as You Go system where today’s workers fund today’s retirees”. As a matter of clarification,

2. Ian Markham is reported to say “We cannot impose a heavy cost burden on future generations in order to fully protect today’s older generation from the impact of the recent market crash”.

All Canadians should fully agree with him in that respect. In this sense, CARP’s proposed CPP expansion does not impose any cost burden at all on future generations because the expansion would be fully funded as required by the CPP Act. This way, today’s older generations (those already in receipt of CPP benefits) would not benefit at all from the expansion. Likewise, the CPP expansion would not support whatsoever the existing CPP from the actual impact of the recent market crash.

3. Claude Lamoureux is reported to say “Some have suggested that increasing the CPP benefit might be a solution to the pension problem. This idea needs to be explored”. He also stated:

“But to have an index pension plan, … today it costs 25%”. It is important to indicate that he was thereby referring to the cost of the Teachers’ pension plan. The full cost of the expanded CPP is only 15.4%, the main reason being that the normal retirement age under the CPP is 65 rather than much less than 60 under the Teachers’ and most private and public sectors DP plans.

“I think it (CPP expansion) should be prospective unless the government has a lot of money that it wants to give away. Don’t forget when the CPP started the people who were older got quite a benefit at that point. People should remember that. My father contributed about two years in the CPP and he collected a pension for something like 35 or 40 years. So if you do it prospectively, it doesn’t cost the government a lot of money, otherwise your pension liability will go up tremendously. Again, the people who are never at the table are the young people. They’re the ones who will have to pay for this.”

In other words, the CPP expansion would be similar to the birth of a new fully funded defined benefit plan through which additional pension credits would accrue every year in respect of each contributor in line with contributions paid by the individual (there would be no 10-year phase-in period as was the case for the existing CPP following its implementation on 1966).

I thank Mr. Dussault for sharing his thoughts with me and my readers. I hope governments around the world are starting to take a look at measures to address the pension solvency issue so that future generations can enjoy safe and stable retirement income.