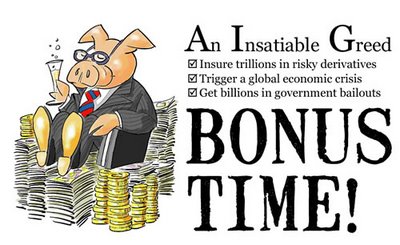 More “bonus outrage”, this time from Fannie and Freddie:

Continuing bonuses paid to employees at Fannie Mae and Freddie Mac are offensive since taxpayers are helping keep the mortgage-finance companies afloat, a leading Senate Republican said on Friday.

“It’s an insult that the bonuses were made with an infusion of cash from taxpayers,” Charles Grassley of the Senate Finance Committee said in a statement. “The elite in Washington and New York need to realize that bonuses for poor performance and at taxpayer expense do a lot of damage to public confidence.”

The bonuses for 7,600 employees will total about $210 million over 18 months, the Wall Street Journal reported on its website, quoting a letter to Grassley from the director of the Federal Housing Finance Agency, which regulates the companies.

About $51 million in bonuses was paid in late 2008 and the rest is to be paid in 2009 and early 2010, the newspaper said, quoting the letter from James Lockhart.

The largest bonus for any individual will total $1.5 million, the newspaper said.

Grassley, an Iowa lawmaker, has been a strong critic of executive bonuses paid out by finance companies that have lately had to rely on government aid.

AIG was under fire for paying out $165 million of bonuses despite a series of taxpayer bailouts for the company totaling $180 billion. Fannie Mae and Freddie Mac have also had to rely on a huge helping of government aid since they were nationalized in September.

Still, while several AIG executives received multimillion-dollar bonuses, the extra pay at Fannie Mae and Freddie Mac is being spread much more evenly across the companies.

Lockhart wrote that the pay plan includes “many hard-working lower-level employees which are important to the mission of providing stability, liquidity and affordability to the housing market.”

Lockhart wrote Grassley last week that bonuses were a key component of pay for more than 7,500 employees at the two companies.

When other lawmakers have questioned the payments, Lockhart has defended them as an important defense against employee attrition.

Herb Allison, the government-appointed overseer for Fannie Mae, has also vowed to try and preserve the employees’ compensation.

“I understand your deep feeling that repudiation of the terms of the retention plan … would be a breach of faith,” Allison wrote in a memo to staff last month.

The blistering public anger over the AIG bonuses has subsided a bit in the last two weeks after lawmakers vented voter outrage at congressional hearings and drafted legislation to tax the payouts.

Congress will be in recess for the next two weeks, so the political pressure to cancel executive bonuses might further subside.

I saw Bill Moyers’ recent interview with Bill Black, the former senior regulator who cracked down on banks during the savings and loan crisis of the 1980s (click here to watch it).

I sent it along to a few friends to get their comments. One of them, Tom Naylor, author of several books including the international best seller Hot Money and the Politics of Debt, wasn’t impressed.

I called Tom to chat. He told me that guys like Black love “conspiracy theories” but they miss the bigger picture, namely, the “the whole financial system and the incentive structure that supports it is corrupt.”

We started talking about bonuses on Wall Street and at pension funds. Here was some of our exchange as I recall it:

Tom: That’s why we need one state pension system which guarantees pensions for everyone. This notion of defined benefits for some and defined contributions for others is stupid.

Me: Yes, I agree, but I am against one mega fund where power is concentrated in too few hands. Interestingly, before CPPIB or PSPIB were created, pension contributions were invested in non-marketable government bonds.

Tom: Precisely, they were safe and now they are at the mercy of Casino Capitalism.

Me: You didn’t think much of that Bill Moyers’ interview?

Tom: No, I didn’t think much of it. Black is missing the bigger point thinking you can regulate a better system but the problem is that the whole financial system, and the perverse incentives that feed it, are corrupt. The meltdown exposed this. I would abolish bonuses all-around, including at pension funds.

Me: Really? That is blasphemy! They will say you are against financial innovation!

Tom: So what? Let them get a real job if they don’t like it. These people are social parasites. They’ve innovated so much that they brought the whole global financial system to its knees, causing social devastation as unemployment soars around the world.

Tom: You know they will always find a way of tinkering with the benchmarks. Besides, benchmarks are part of the problem because they compensate people for taking reckless risks.

Me: True, but I still think we need to fix these benchmarks and introduce performance and operational audits at pension funds by independent industry experts. Also, I would introduce high-water marks so these pension funds have to recoup their losses before doling out one dime of bonus. Finally, unlike hedge funds, senior executives at pension funds do not have skin in the game. They are paid way too much for delivering “alpha” based on bogus benchmarks.

Tom: Yes, and the lion’s share of their performance should be based on ten year returns. I would hold them to that and if someone leaves prior to delivering those returns, I would introduce a clawback on any previous bonuses, as you stated on your blog. But if you ask me, just abolish bonuses altogether and pay them salaries.

Tom and I had a follow-up conversation on “profits” and how bonuses should be tied to real profits, not perceived profits based on some accountant’s valuation. “Either they have the money in the bank after a certain period or they don’t”.

That is why in private markets, I always liked the notion of cash on cash returns. What was the value of the investment at cost, and what was it once you exited? It’s that simple notion of “profit” that we have distorted using all sorts of accounting shenanigans that’s gotten us into this mess.

Another senior pension fund manager shared these thoughts with me following my last comment on Ontario Teachers’ disastrous 2008 results:

Boards know what is going on. They liked the idea of outperforming while the sun shines. The choices are the problem. The benchmarks are just games, a bit of a distraction, really, everyone knows the games and goes along with them.

I would suggest that pensions stop reporting benchmarks and report profits and losses like a regular business.

The benchmarks can just be risk and compensation tools, but compensation should be capped. Pension law could be changed to preclude or cap leverage, properly defined to catch the derivatives approaches. This is the main risk factor that has been exposed in the times.

So let me know what you think, should we abolish bonuses altogether in the financial industry and at pension funds or just abolish benchmarks and cap compensation and leverage?