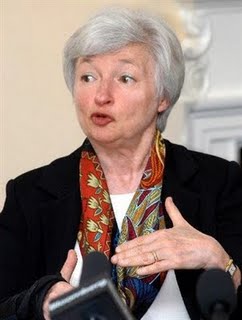 The mainstream media is reporting that Fed governor Janet Yellen, a noted dove on inflation as Fed governors go, just told a gathering of bankers in Idaho that “deficits do not cause inflation” and summarily dismissed any concerns in that regard.

So, consulting the source material which is included just below, I am struggling to understand what she is saying, and to believe that she said it with a straight face, and was not just jawboning.

What Janet Yellen seems to be saying is:

First, that deficits do not matter unless they are ‘structural’ and not temporary. It does not matter how much, for example, we give to the banks. When the crisis is over, the deficits will remain, but will not grow larger, and will be offset by higher taxes, that will come from the improved economy.

Thirdly, monetary inflation only occurs where excess demand for goods and services is generated. Until that point, unless there is this demand, increased money supply does not generate inflation. We might call this the reverse Laffer, in that it is a Demand side view of inflation that tends to discount the supply side completely.

One would not think that the US had recently seen the collapse of an enormous housing bubble, following the collapse of a large but less enormous stock bubble. Janet brushes this off faster than a stock strategist on CNBC.

Although she received her Ph.D. from Yale in 1971, she surely must have subsequently studied the stagflation of the 1970’s in the US, where demand remained relatively stable, but a supply shock on the oil side, together with the egregious monetary policy of a pliable Fed that had been accommodating Richard Nixon, finally triggered a rather nasty stagflation that the hairy-knuckled resolve of tall Paul Volcker was finally able to overcome.

Janet Yellen is greatly mistaken, but almost emblematic of the thinking in some circles that can see only the demand side of the equation, which is most common in a layperson relating to their common domestic experience. What is frightening in a way is that she is not some blogger out on the net, or a talking head for the extended infomercial that is financial reporting in the US, but is a Fed governor.

And she is no outlier. Her thinking underpins the basis for Bernanke’s strategy of packing the banks with liquidity, monetizing their assets, but maintaining control of that added liquidity by having the ability to attract bank reserves into the Fed where they can be managed through the ability to pay interest on those reserves.

Can the Sorcerer’s apprentices keep a steady hand on this latest monster from their laboratory? Every time they try this, something unexpected happen, and we go to the brink, to be rescued by another patch, another new experiment, designed to save us from the last one gone wrong.

Her arrogance toward ‘developing countries’ is absolutely appalling, and sure to come back to haunt her at some later date. If one looks at the performance of the dollar and its long term purchasing power under the Fed, it appears that Janet is a proud member of the subjective idealist school of behavioural economics. What we do not admit to be real cannot exist, and will not hurt us.

So, we can inflate our way to prosperity, provided that we control the perception of the results of our actions. Jigger the CPI so its no longer valid, suppress long term interest rates by buying the curve selectively and suppressing gold (See Gibson’s Paradox by Larry Summers), and coerce the world’s central banks through various means to support our monetary inflation step for step. After all, everything is relative. Until it is not.

OMG. Our entire financial system is based on the sufferance and good will of potential adversaries to do what is in our best interests because the fragility of our currency frightens them. And well they might be fearful, when they read this from Ms. Yellen, and see how many true believers in the omnipotence of the Fed take it seriously.

(MarketWatch – Washington) — Concern that the massive federal budget deficit will cause inflation is misplaced, said Janet Yellen, the president of the San Francisco Federal Reserve on Tuesday. Deficits don’t cause inflation, she said. Instead, the worry is that they might cause interest rates to rise. “Right now, private investment spending is extremely weak, so financing for the large federal deficits is readily available. But once private spending recovers, the competition for funds between the government and private sectors could drive interest rates up,” Yellen said in a speech to bankers in Idaho.

Jesse here. The relevant quote from Janet Yellen’s speech to the bankers in Idaho is excerpted below from the San Francisco Fed’s website.

Let me now address another issue that is garnering attention—inflation. This is a subject rife with contradiction. Almost without exception, my business contacts report downward pressure on wages and prices. At the same time, they tell me they worry that the United States is on the threshold of serious inflation. They see large federal budget deficits today and more looming on the horizon. They also note that the Fed has pumped up bank reserves and expanded its balance sheet to fund its financial support programs. They worry that this may amount to financing deficits with money creation. Surely, they say, these things will eventually have to lead to higher inflation.

I’ll begin with budget deficits. The gap in the federal budget for the current and the next fiscal years are projected to exceed $1 trillion, far larger than anything we’ve ever seen before. But a large part of these current deficits are temporary. A portion stems from the impact of the weak economy on the budget. In a recession, tax collections fall and spending on programs such as unemployment insurance rise automatically. A significant portion is due to the fiscal stimulus that has been put in place over the next few years to address the recession. Antirecessionary fiscal policy, in my view, is entirely appropriate. Since that stimulus is temporary by design, the resulting deficits will shrink as the stimulus phases out. But federal deficits will not disappear completely even when the economy has recovered and the stimulus program has phased out. On the contrary, these ongoing or “structural” deficits are anticipated to stretch indefinitely into the future and to escalate over time in a manner that ultimately is not sustainable. The long-term projected structural budget deficit mainly reflects the impact of an aging population and rapidly rising health-care costs on spending for federal entitlement programs, particularly Medicare and Medicaid.

Economists have known, worried, and warned the public about the damaging consequences of escalating long-term budget deficits in the United States for decades. It’s high time for our country to tackle the problem head-on. But the main concern with these deficits relates to productivity and living standards, and not high inflation. Large budget deficits do not cause high inflation automatically. In fact, since World War II, large deficits have been associated with high inflation only in developing countries. That’s because developing countries often have central banks that are under the sway of the government, which sometimes induces them to print money to finance government spending. The connection isn’t found in countries such as ours with advanced financial systems and independent central banks. Remember that, in the 1980s, the United States ran large deficits just as inflation was coming down. And Japan has had huge deficits through much of the past two decades, yet its problem is persistent deflation—precisely the opposite of inflation. The United States and most other industrialized countries have central banks with long traditions of independence and deep-seated support for keeping politics out of monetary policy. In those countries, the monetary authorities generally have stuck to their inflation objectives, even when governments ran large budget deficits.

In advanced countries, the problem isn’t that large deficits cause inflation. Rather it’s that they raise long-term interest rates, thereby crowding out private investment, which holds back advances in productivity and living standards. Right now, private investment spending is extremely weak, so financing for the large federal deficits is readily available. But once private spending recovers, the competition for funds between the government and private sectors could drive interest rates up. A decline in productivity growth is a serious problem—one we should strive to avoid—but it is not the same as inflation. 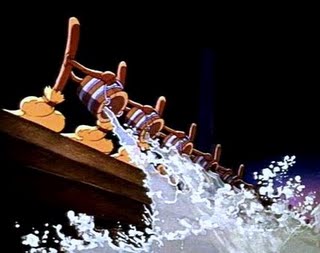 So what about the Fed’s unprecedented balance sheet expansion? Our strong steps to avert financial and economic meltdown have caused our assets to more than double, from under $900 billion at the start of the recession to over $2 trillion now. This expansion is largely financed by increases in excess reserves that banks deposit with us.

Now we come to the crux of the issue: Will this expansion of credit and bank reserves create high inflation? My answer is no. And the reason again is because of current economic conditions. Monetary policy fosters inflation when it loosens the stance of policy enough to create excess demand for goods and services. Right now, we have exactly the opposite—an excess supply of goods and services. We need more demand—not less—to offset slack in labor and product markets. We have seen a noticeable slowdown in wage growth and reports of wage cuts have become increasingly prevalent. Businesses are cutting prices to boost sales. As a result, core inflation—a measure that excludes volatile food and energy prices—has drifted below 2 percent, a level that I and most of my colleagues consider consistent with price stability. With unemployment already substantial and likely to rise further, and industrial capacity utilization at record low levels, downward pressure on wages and prices isn’t likely to go away soon. I expect core inflation to remain below 2 percent for several more years.

Of course, the economy will eventually recover and we will need to withdraw monetary accommodation. If we were to fail to do so, we would indeed have higher inflation. The Fed is keenly aware of this. We have the tools to tighten policy when the time is right and we have the will to use them. First, many of our emergency programs are already tapering off as market conditions improve. Second, many of the assets that we have accumulated during the crisis—such as Treasury and mortgage-backed agency securities—have ready markets and can be easily sold. Finally, the Fed can push up the federal funds rate and tighten policy by raising the rate of interest paid to banks on the reserves they deposit with us—authority granted by Congress last year. An increase in the interest rate on reserves will induce banks to lend money to us rather than to other banks, thereby pushing up rates in the interbank market and, by extension, other interest rates throughout the economy. This is an important tool because, even if the economy rebounds nicely, the credit crunch might not be fully behind us and some financial markets might still need Fed support. This tool will enable us to tighten credit conditions even if we maintain a large balance sheet for a time. The experience of central banks in Europe, Japan, and Canada suggests that this approach can be effective.