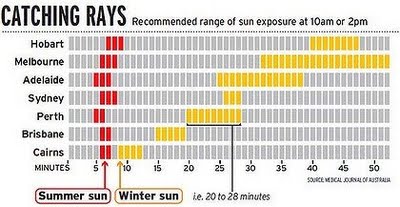 Former Federal Reserve Chairman Alan Greenspan was on ABC’s This Week sounding cautiously optimistic. Mr. Greenspan’s logic is very simple: as long as the financial markets are calm, then the real economy will eventually improve.

Mr. Greenspan is concerned about a double-dip, especially if housing prices erode further, but he sounds fairly optimistic. Macro Man, however, says consider yourselves warned. There are risks of a W-recovery and let’s not forget about Ray Dalio’s D-process changing pension rules and how the specter of deflation will haunt all asset classes except for government bonds. Of course, all that liquidity is drowning the meaning of inflation and there are real risks that we will see another asset bubble, most likely in alternative energy (despite crazy volatility, stay long solar stocks).

But today I want to talk to you about another D, the D Generation:

In a country as dazzled by sunlight as Australia, the idea that a GP should check your vitamin D levels seems bizarre. Yet that is what some doctors are now suggesting – that along with routine checks for blood pressure and cholesterol, we have a test for vitamin D deficiency, says Rebecca Mason.

Vitamin D deficiency was once something most younger adults did not have to worry about – at least if they were light-skinned. It was considered mainly a problem of housebound, sick or elderly people with little exposure to sunlight, of women who wear concealing clothes and people with dark skin.

But studies across all ages in different parts of Australia, including sunny Queensland and Perth, have found that some younger adults have mild to moderate deficiencies, especially if they live in cities, says Mason, professor of physiology at the Bosch Institute, University of Sydney.

The cause of what she calls an epidemic of vitamin D insufficiency is a combination of two things. One is that health experts have raised the bar of how much vitamin D is enough. The other is probably changes in the way we live that have reduced our exposure to sunlight, our main source of vitamin D.

We are not only savvier about skin protection, but we also have longer working hours; lunch breaks spent at our desks and long commutes in the confines of cars and buses – all conspiring to keep us from the sun.

Vitamin D, which is really a building block for a hormone, is best known for its link to bone health – without it you cannot absorb enough calcium. But the other reason why vitamin D is a hot topic is the evidence linking the lack of it to a surprisingly mixed bag of health problems. The tally so far: multiple sclerosis, Type 1 diabetes, rheumatoid arthritis, muscle weakness, high blood pressure, memory loss – and even weight gain. But the strongest evidence so far is for cancer, Mason says.

“The most consistent evidence links insufficient vitamin D to colon cancer,” she says. “There’s evidence for breast, prostate, and ovarian cancer and melanoma too, but it’s limited.”

As for how vitamin D might help protect against cancer, some studies have shown it helps slow the proliferation of cancer cells. It may also improve the immune system’s defence against some cancers and may reduce the growth of blood vessels that nourish cancer cells, she says.

More intriguing still is the idea that sunlight, the bringer of skin cancer, might also help prevent the disease, according to preliminary research at the Bosch Institute. The theory is that vitamin D compounds that accumulate in skin when it is exposed to sunlight may help reduce UV damage to the DNA of skin cells, Mason explains.

But for people who already have some forms of cancer, including colon or oesophageal cancer, healthy levels of vitamin D may influence their survival. Some studies show that the more vitamin D, the better the outcome, the professor says.

That is why the NSW Breast Cancer Institute is investigating the vitamin D levels of women newly diagnosed with breast cancer, says Kellie Bilinski, a dietitian and the project leader of the institute’s vitamin D research program.

Where you live, and therefore how much sunlight you get, might also influence your risk of some diseases. Overseas studies suggest that women living furthest from the equator are more at risk of breast cancer, Bilinski says. A study by the Breast Cancer Institute is trying to find out if the latitude where a woman lives in Australia affects her chances of developing the disease.

As for multiple sclerosis, the risk is seven times higher if you live in Tasmania than if you live in tropical areas of Queensland, says Associate Professor Bruce Taylor of Hobart’s Menzies Research Institute. To understand the sunlight-MS connection it helps to know that MS is an auto-immune disease – one where the immune system mistakenly attacks the body’s own tissues. Researchers now believe that having sufficient vitamin D may help prevent MS by making the immune system less trigger-happy.

“This may also mean that vitamin D has a role to play in other auto-immune disease such as Crohns disease, rheumatoid arthritis and Type 1 diabetes,” Taylor says.

So how do you get enough vitamin D from sunlight without boosting your risk of skin cancer?

“It’s a fine line between usefulness and damage,” says Mason. “There’s some evidence that small amounts of UV damage are relatively easily repaired in most people and that short exposures to UV sunlight are also more efficient at producing vitamin D. So the recommendation for UV exposure is little and often. It’s certainly not frying your skin, which is very damaging and not particularly useful for making vitamin D either. Vitamin D compounds in skin can actually be destroyed by too much UV exposure.”

The time of day spent in the sun matters too, she adds, recalling a couple who were regular walkers, but walked separately at different times of the day, and had different vitamin D levels as a result. The woman walked about midday in winter and her levels were healthy. The man walked in the early morning and evening and was mildly deficient.

In winter, the advice for those in NSW and Victoria is to expose 15 per cent of your body surface – meaning either hands, face and arms, or legs for about 15 minutes as close to noon as possible, and minus sunscreen. In summer, it is to expose the same areas for six to eight minutes either just before 11am or just after 3pm, again without sunscreen because sunscreen reduces vitamin D production.

“This exposure isn’t enough to cause redness in summer, but it’s enough to cause DNA damage from UV radiation and raise the risk of skin cancer, so it’s a trade-off,” Mason says.

‘‘But this is only the recommendation for light-skinned people – melanin, the pigment that makes skin dark, makes it harder to produce vitamin D, so dark-skinned people need three to six times more exposure, depending on how dark your skin is.”

But if vitamin D looks so promising, why don’t health authorities recommend we all take a supplement and then see if levels of colon cancer and MS drop? Because we still need more answers about the long-term safety of taking vitamin D supplements, says Taylor. But it is worth getting a test to check your level, especially if there is a family history of MS, he adds.

“If the levels are inadequate, your GP can recommend the right supplement. GPs, especially in Tasmania, are becoming better informed about vitamin D and are measuring patients’ levels more often,” Mason says.

Weight gain may also be linked to vitamin D. Results of a small study at the University of Minnesota reported in June that adding vitamin D to a kilojoule-controlled diet increased weight loss in people, most of whom had low levels of the vitamin. But the researchers stressed that more research was needed to be sure that vitamin D had any role in weight loss.

Earlier research, including a large study from the Harvard School of Public Health, suggests that obesity boosts the risk of being low in vitamin D – which may be partly due to being less active outdoors, says Mason.

It could be that fat tissue acts as a ‘‘sink’’ for vitamin D which is only released when a person loses weight, according to other studies from Boston University School of Medicine.

This, Mason adds, could have given our hunter gatherer ancestors an advantage. “Food, like sunshine, was plentiful in summer, so people put on weight and some of the vitamin D they made would have been stored in that fat,’’ she says.

‘‘In winter, food was less plentiful, so they would have lost weight, releasing fuel for energy – along with vitamin D at a time of the year when there was less sunshine. But these days, losing fat, and releasing stored vitamin D, is a difficult process.”

Earlier this week I found out that the MS drug trial I was on was scrapped because the results showed the drug was ineffective. I was disappointed but not surprised. It didn’t bother me as much because I just enjoyed three weeks in Crete where I spent time with my family, got plenty of sun, swam like a dolphin and ate incredibly healthy food, including fresh fruits and real delicious salads doused with plenty of olive oil and with red tomatoes that do not taste like cardboard paper.

So while I worry about deflation and D-process, I am more concerned about how our lifestyles are unleashing an epidemic of diseases that will define the D Generation. If you have not checked your vitamin D levels, please do so and you should be taking a minimum of 1,000 IUs a day (one small cheap pill) and get out of the office in mid day for a little walk in the sun.

Finally, I added some links to MS box at the bottom of my blog, including Tricia Chandler’s story of Multiple Sclerosis (see video below) and her and Jake’s donation page for the Pacific South Coast MS chapter. There are many MS profiles out there like Tricia’s and I find inspiration in each and every one of them as well as the stories of millions of people who are fighting their respective diseases.

These people know that in life, your health and the health of your loved ones is the most important thing. So while we talk about finance as the end all and be all of life, we need to take a step back and get some perspective on what really matters: health, family and friends.