By Moses Kim of Expected Returns:

Moving forward, the most critical indicator of the viability of our economy will be consumer spending. Simply put, without a buoyant consumer, there will be no recovery. Due no doubt to the negative characteristics of consumer data. the death of the consumer is receiving scant coverage.

America is a nation whose growth in recent decades has been predicated on a model of consumption. From a nation that used to save to invest, we now borrow to consume. As buying power in Treasuries from foreign entities wanes, we will be forced to fund our consumption through currently non-existent savings. An increased savings rate will put pressure on consumption, which will in turn pressure GDP. In the following chart, notice how consumption as a percent of GDP remains above historical norms. Consumption would have to contract another $800 Billion for personal consumption expenditures as a percent of GDP to revert to historical levels. 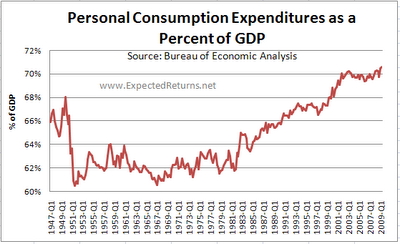 It is important to realize that what we are experiencing now isn’t a classic inventory-led downturn, but a structural debt deflation. Since Americans have been wont to save, consumer credit has played an outsized role in our economic growth. As such, it is critical to be keen on developments in the availability of credit, which can be measured by consumer credit outstanding.

Consumer credit outstanding, a measure of short and intermediate-term credit, is falling precipitously. Banks are, quite justifiably, not willing to service loans to deteriorating credit risks. Until the unemployment picture improves, banks are unlikely to rapidly increase the extension of credit. 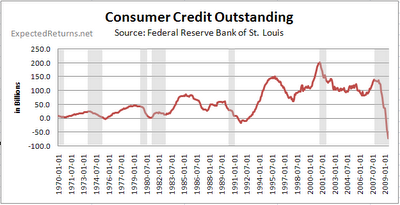 Consumption in the past decade, as reflected by retail sales, has enjoyed an impressive and inexorable rise. Year over year E- commerce sales growth remained robust even in the midst of the recession of 2001.; in fact, the rate of growth accelerated. As you can see from the following chart, E-commerce retail sales are declining dramatically. 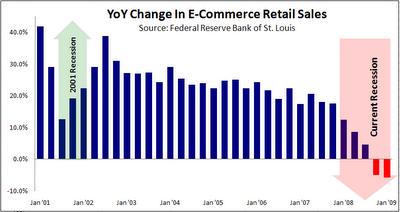 The consumer is conspicuously missing in this supposed “green shoot” environment. At the very least, the V-shaped recovery thesis is not corroborated by data on the consumer front. Hopes of recovery must therefore be regarded as mere presumption until the outlook for the consumer improves.