The peak of foreign capital inflows into the US was clearly seen in the second quarter of 2007, just before the crisis in the US that has rocked its banking system and driven it deeply into recession.

Are the two events connected? Had the US become a Ponzi scheme that began to collapse when new investment began to wane, and the growth of returns could not be maintained?

Watch the dollar and the Treasury and Agency Debt auctions for any further signs of capital flight, which is when those net inflows of foreign capital turn negative. And if for some reason the unlikely happens and it gains momentum, the dollar and bonds and stocks can all go lower in unison, and there is no place to hide except perhaps in some foreign currencies and precious metals.

The sad truth is that US collateralized debt packages and their derivatives have become toxic in the minds of the rest of the world, and there is little being done to change that, except an orderly winding down of the bubble, with the remaining assets being divided largely by insiders, and not price discovery and capital allocation mechanisms driven by ‘the invisible hand’ of the markets. 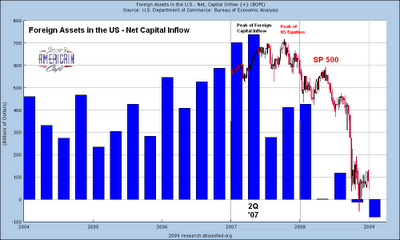 Unfortunately the Net Inflow Data is quarterly, and subject to revisions. But we have to note that the spectacularly rally off the bottom in the SP 500, not fully depicted above, is not being matched by a return of foreign capital inflows.

If that inflow does not return, if the median wage of Americans does not increase, if the financial system is not reformed, if the economy is not brought back into balance between the service and manufacturing sectors, exports and imports, then there can be no sustained recovery in the real, productive economy.

The rally in the US markets is based on an extreme series of New Deal for Wall Street programs from the Fed and the Treasury, monetization, and the devaluation of the dollar.