US Personal Income has taken its worst annual decline since 1950.

This is why it is an improbable fantasy to think that the consumer will be able to pull this economy out of recession using the normal ‘print and trickle down’ approach. In the 1950’s the solution was huge public works projects like the Interstate Highway System and of course the Korean War.

Until the median wage improves relative to the cost of living, there will be no recovery. And by cost of living we do not mean the chimerical US Consumer Price Index.

The classic Austrian prescription is to allow prices to decline until the median wage becomes adequate. Given the risk of a deflationary wage-price spiral, which is desired by no one except for the cash rich, the political risks of such an approach are enormous.

On paper it is obvious that a market can ‘clear’ at a variety of levels, if wages and prices are allowed to move freely. After all, if profits are diminished, income can obviously be diminished by a proportional amount, and nothing has really changed in terms of viable consumption.

The Supply side idealists (cash rich bosses, Austrians, neo-liberal, monetarist, and deflationist theorists) would like to see this happen at a lower level through a deflationary spiral. The Keynesians and neo-classicals wish to see it driven through the Demand side, with higher wages rising to meet the demands of profit in an inflationary expansion. Both believe that market forces alone can achieve this equilibrium. Across both groups runs a sub-category of statism vs. individualism.

Unfortunately both groups are wrong.

Both approaches require an ideal, almost frictionless, objectively rational, and honest economy in order to succeed. The Keynesians have a bit of an edge in this, because it is easier to control inflation than deflation in a fiat regime, and the natural growth of inflation tends to satiate the impulse to greed. They don’t care if they can buy more as long as they can say they HAVE more. People tend to be irrational, and there is a percentage of the population that is irrationally greedy and obsessively rapacious. People are not naturally ‘good.’

The greatest flaw in the many studies that come from each of the schools to prove their point is the brutal way in which they flatten the reality of the markets and make assumptions to allow their equations and analysis to ‘work.’ They spend most of their energy showing while the ‘other school’ is a group of ignorant fools, doomed to ignominious failure, in an atmosphere reminiscent of a university departmental meeting.

This has quietly scandalized those from other scientific disciplines who review the work of many of the leading economists. Benoit Mandelbrot was poking enormous holes in the work of the leading economists long before Nassim Taleb made it more widely known. The ugly truth is that economics is a science in the way that medicine was a profession while it still used leeches to balance a person’s vapours. Yes, some are always better than others, and certainly more entertaining, but they all tended to kill their patients.

The most intractable part of the current financial crisis, and the ongoing problem of the US economy is the huge tax which is levied on the American public by its corporations, primarily in the financial and health care sectors, and a political system based on lobbyists and their campaign contributions.

There are hidden taxes and impediments to ‘free trade’ at every turn. The ugly truth is that capitalism-in-practice hates free markets, always seeking to overturn the rules and impose oligopoly if not outright monopoly through barriers to entry, manipulation of the political process, distortion of regulation, predatory pricing, brute force, and the usual slate of anti-trust practices.

Some of these ‘hidden taxes’ are the bonuses on Wall Street which require an increasing percentage of the financial ‘action.’ The credit cards fees and penalties levied by banks to support profits in a contracting economy. The Sales General & Administrative portion of the Income Statements of the pharmaceutical industry which only American consumers seem willing to pay. A health care system which is a monument to overspending, outrageous pricing, and greed.

The notion that “if only government would not regulate markets at all everything would be fine” is a variation of Rousseau’s romantic notion of the noble savage which no one believes except those who wish to continue to act like savages, and those who get no closer to the real work of an economy than their textbooks. Economic Darwinism works primarily to the advantage of the sharks. Anyone who believes that ‘no regulations’ works well has never driven on a modern highway at peak periods.

Yes, a certain portion of the population are adult, and generally good and fair. But there is a percentage of the population that is not. And since the 1980’s they have been encouraged by the culture of relativism and greed to ‘express themselves’ and so they have, with a vengeance.

Discussion rarely proceeds very far because of the dialectical nature of American thought. Both extremes are wrong, but they seem to content to merely bash each other, pointing out their errors, while repeating the same mistakes over and again.

The condition of the American economy is strikingly similar to the Soviet state economy of the last two decades of the 20th century. People are trying to sustain a system “as is” that is based on bad assumptions, unworkable constructions, conflicting objectives, and a flagging empire laced heavily with elitist fraud and corruption. The primary difference is that the US has a bigger gun and its hand is in more people’s pockets with the dollar as the world’s reserve currency. But the comparison seems to indicate that the economy must indeed fail first, before genuine change can begin, because the familiar ideology and practices must clearly fail before they can recede sufficiently to make room for new ways and reforms.

A new school of Economics will rise out of the ashes of the failure of the American economy as happened after the Great Depression. Let us hope that it is better than what we have today.

In the short term, what does all this mean?

There is NO system that will work without substantial, continuing effort, and continual adaptation and commitment to a certain set of goals that are more about ‘ends’ than ideological process.

Because our system has been abused for so long, and is so distorted and imbalanced and dominated by a relatively few organizations beholden to a self-serving status quo, reform is not an afterthought, it is the sine qua non.

It means that until the banks are restrained, and the financial system is reformed, and balance is restored, there can be no sustained recovery. 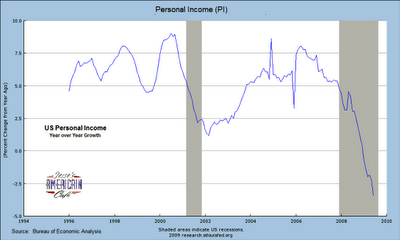