A bombshell has dropped in mortgage land.

We’ve said for some time that document fabrication is widespread in foreclosures. The reason is that the note, which is the borrower IOU, is the critical instrument to establishing the right to foreclose in 45 states (in those states, the mortgage, which is the lien on the property, is a mere “accessory” to the note).

The pooling and servicing agreement, which governs the creation of mortgage backed securities, called for the note to be endorsed (wet ink signatures) through the full chain of title. That means that the originator had to sign the note over to an intermediary party (there were usually at least two), who’d then have to endorse it over to the next intermediary party, and the final intermediary would have to endorse it over to the trustee on behalf of a specified trust (the entity that holds all the notes). This had to be done by closing; there were limited exceptions up to 90 days out; after that, no tickie, no laundry.

Evidence is mounting that for cost reasons, starting in the 2004-2005 time frame, originators like Countrywide simply quit conveying the note. We are told this practice was widespread, probably endemic. The notes are apparently are still in originator warehouses. That means the trust does not have them (the legalese is it is not the real party of interest), therefore it is not in a position to foreclose on behalf of the RMBS investors. So various ruses have been used to finesse this rather large problem.

The foreclosing party often obtains the note from the originator at the time of foreclosure, but that isn’t kosher under the rules governing the mortgage backed security. First, it’s too late to assign the mortgage to the trust. Second. IRS rules forbid a REMIC (real estate mortgage investment trust) from accepting a non-performing asset, meaning a dud loan. And it’s also problematic to assign a note from the originator if it’s bankrupt (the bankruptcy trustee must approve, and from what we can discern, the note are being conveyed without approval, plus there is no employee of the bankrupt entity authorized to endorse the note properly, another wee problem).

We finally have concrete proof of how widespread document fabrication was. For some reason the ScribD embeds aren’t working correctly, you can view the entire Lender Processing Services price sheet here, and here are the germane sections. 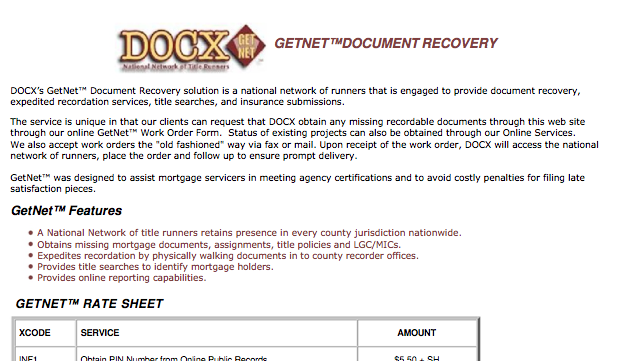 Not only are there prices up for creating, which means fabricating documents out of whole cloth, and look at the extent of the offerings. The collateral file is ALL the documents the trustee (or the custodian as an agent of the trustee) needs to have pursuant to its obligations under the pooling and servicing agreement on behalf of the mortgage backed security holder. This means most importantly the original of the note (the borrower IOU), copies of the mortgage (the lien on the property), the securitization agreement, and title insurance.

Also notice that there is a price for creating allonges. We discussed earlier that phony allonges have become the preferred fix for the failure to convey notes properly:

The cure for the mortgage documents puts the loan out of eligibility for the trust. In order to cure, on a current basis, they have to argue that the loan goes retroactively back into the trust. This is the cure that the banks have been unwilling to do, because it is a big problem for the MBS. So instead they forge and fabricate documents.

The letter in particular mentions an allonge. An allonge is a separate sheet of paper which is attached to a note to allow for more signatures, in this case, endorsements, to be added. Allonges have had a way of magically appearing in collateral files while trails are in progress (I’ve seen it happen in cases I was tracking; it’s gotten so common that some attorneys warn judges to be on the alert for “ta dah” moments).

The wee problem with an allonge miraculously being discovered is that the allonges that show up are inherently in violation of UCC (Uniform Commercial Code) provisions (UCC has been adopted by all states, a few states have minor quirks, but the broad provisions are very similar).

An allonge is NOT to be used unless all the space on the original note, including the margins and the back side of pages, has been used up. This is never the case. Second, an allonge has to be so firmly attached to the original document as to be inseparable. Thus an allonge suddenly being discovered is an impossibility (well impossible if it were legit), yet it seems to happen all the time.

This revelation touches every major servicer and RMBS trustee in the US. DocX is a part of of Lender Processing Services. Lender Processing Services has three lines of business, the biggest of which is “default services”, representing close to half its revenues of this over $2 billion in revenues company. DocX is its technology platform it uses to manage its national network of foreclosure mills. Note that DocX closed one of its offices in Alpharatta, Georgia earlier this year, per StopForeclosures:

So wake up and smell the coffee. The story that banks have been trying to sell has been that document problems like improper affidavits are mere technicalities. We’ve said from the get go that they were the tip of the iceberg of widespread document forgeries and fraud. This price sheet provides concrete proof that the practices we pointed to not only existed, but are a routine way of doing business in servicer and trustee land. LPS is the major platform used by all the large servicers; it oversees the work of foreclosure mills in every state.

And this means document forgeries and fraud are not just a servicer problem or a borrower problem but a mortgage industry and ultimately a policy problem. These dishonest practices are so widespread that they raise serious questions about the residential mortgage backed securities market, the major trustees (such as JP Morgan, US Bank, Bank of New York) who repeatedly provided affirmations as required by the pooling and servicing agreement that all the tasks necessary for the trust to own the securitization assets had been completed, and the inattention of the various government bodies (in particular Fannie and Freddie) that are major clients of LPS.

Amar Bhide, in a 1994 Harvard Business Review article, said the US capital markets were the deepest and most liquid in major part because they were recognized around the world as being the fairest and best policed. As remarkable as it may seem now, his statement was seem as an obvious truth back then. In a mere decade, we managed to allow a “free markets” ideology on steroids to gut investor and borrower protection. The result is a train wreck in US residential mortgage securities, the biggest asset class in the world. The problems are too widespread for the authorities to pretend they don’t exist, and there is no obvious way to put this Humpty Dumpty back together.