I’m off the grid, have back to back meeting and travel that preclude blogging before Friday evening. Richard Smith and Ed Harrison are ably manning the fort.

I am leaving you with a more elaborate Antidote than usual. Enjoy! Hat tip reader Scott:

If you thought the legend of the horse whisperer was impressive, here’s an animal tale with even more bite. Rather than trying to tame wild stallions, fearless Costa Rican fisherman Chito prefers a playful wrestle in the water with his best pal Pocho – a deadly 17ft crocodile. The 52-year-old daredevil draws gasps of amazement from onlookers by wading chest-deep into the water, then whistling for his 980lb buddy – and giving him an affectionate hug. Crazy Chito says: “Poncho is my best friend. This is a very dangerous routine but we have a good relationship. He will look me in the eye and not attack me. It is too dangerous for anyone else to come in the water. It is only ever the two of us.” Chito made friends with the croc after finding him with a gunshot wound on the banks of the Central American state’s Parismina river 20 years ago. He had been shot in the left eye by a cattle farmer and was close to death. But Chito enlisted the help of several pals to load the massive reptile into his boat. He says: “When I found Poncho in the river he was dying, so I brought him into my house. He was very skinny, weighing only around 150lb I gave him chicken and fish and medicine for six months to help him recover. I stayed by Poncho’s side while he was ill, sleeping next to him at night. I just wanted him to feel that somebody loved him, that not all humans are bad. It meant a lot of sacrifice. I had to be there every day. I love all animals – especially ones that have suffered.” 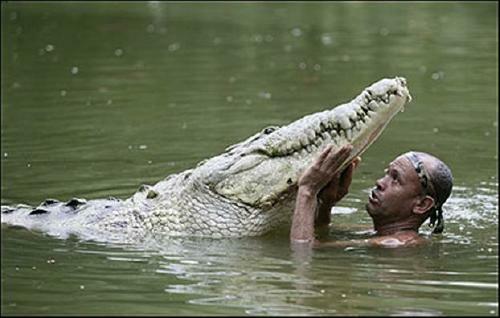 It took years before Chito felt that Poncho had bonded with him enough to get closer to the animal. He says: “After a decade I started to work with him. At first it was slow, slow. I played with him a bit, slowly doing more. Then I found out that when I called his name he would come over to me.”

At one point during his recovery, Chito left the croc in a lake near his house. But as he turned to walk away, to his amazement Poncho got out of the water and began to follow him home. Chito recalls: “That convinced me the crocodile could be tame.” But when he first fearlessly waded into the water with the giant reptile his family was so horrified they couldn’t bear to watch. So instead, he took to splashing around with Poncho when they were asleep. Four years ago Chito showed some of his tricks to friends, including getting the animal to close his eyes on command, and they convinced him to go public with a show. Now he swims and plays with Poncho as well as feeding him at the lake near his home in the lowland tropical town of Sarapiqui. The odd couple have now become a major tourist attraction, with several tour operators, including Crocodile Adventures, taking visitors on touring cruises to see the pair. 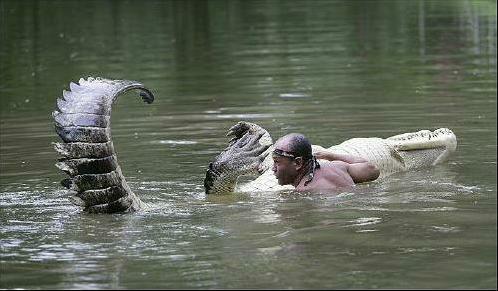 On the Crocodile Adventures website it describes the spectacle as: “One of the most amazing things that no cruise ship passenger will want to miss, the adventure show between the man and the crocodile.”

American crocodiles, which inhabit North, Central and South America, can live to around 70 years old. It is estimated that Poncho is around 50 – almost the same age as his owner. They are also said to be less aggressive than their Nile or Australian counterparts. Chito, whose real name is Gilberto Shedden, was given his nickname by friends, who also call him “Tarzan Tico” – Tico being a familiar word for a Costa Rican.
And he certainly plays up to the name, wearing a tattered pair of leopard-print shorts for his half-hour performances with Poncho. 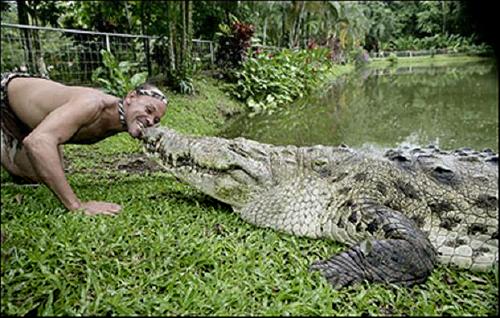 A keen conservationist, he also offers boat tours, where he eagerly points out a variety of wildlife. But he only charges a few dollars to watch the breathtaking crocodile show, claiming he does not want to cash in on Poncho. He says: “He’s my friend, I don’t want to treat him like a slave or exploit him. I am happy because I rescued him and he is happy with me because he has everything he needs.”