Yves here. Normally I put up cross posts without additional commentary, but I wanted to offer a couple of observations about this post. While this piece is admittedly a bit heavy on economist-speak, and readers may differ with the policy recommendations, = it gives an even-handed account of the early rebound during the Great Depression and the backtracking in 1937. Since we have few examples of severe financial crises in large economies, let alone global financial crises, the Great Depression remains an important case study.

By Nicholas Crafts. Professor of Economics and Economic History at the University of Warwick and CEP, and Peter Fearon, Professor Emeritus of Modern Economic and Social History, University of Leicester. Cross Posted from VoxEU

OECD countries are recovering from the worst recession and financial crisis since the Great Depression. Policymakers’ problems are now those of designing the right exit strategy. Withdraw stimulus too soon and tip the economy back into recession; leave it too late and see inflation take off.

While interest rates are at or near the lower bound, fiscal multipliers are probably high. Yet in the medium term, fiscal sustainability needs to be restored at a time when structural budget deficits have been raised by the adverse impact of the banking crisis on potential output.
In this context, it is timely to revisit the severe recession that rudely interrupted the strong US recovery from the depression in 1937/8. This episode is relatively little-known to most non-US economists but offers lessons that we should heed. A recent paper by Francois Velde (2009) provides an excellent description and analysis.

The recovery from the Great Depression

Recovery from the depression was vigorous in the years after 1933. Table 1 shows that by 1937 real GNP was nearly back to its peak and more than 40% higher than the nadir of the depression in early 1933. It is generally agreed that the recovery was largely a result of the new policy regime established when the US left the gold standard in March 1933. As Christina Romer pointed out, this was followed by very strong growth in the money supply (Romer 1991, 2009). Crucially, the new regime meant a return to inflationary expectations which Gauti Eggertsson’s DSGE model sees as fundamental to an escape from the liquidity trap (Eggertsson and Pugsley 2006, Eggertsson 2008). Both authors make the point that, with nominal interest rates near the lower bound, Roosevelt’s strategy of seeking to return prices to mid-1920s levels represented a route to the dramatically lower real interest rates which were central to the transmission mechanism. Although federal government expenditure rose sharply, as is very well-known to economic historians, the New Deal was at most a very modest fiscal stimulus but it may have contributed to changing inflationary expectations. Budget deficits of 3% or 4% of GDP reflected the weakness of tax revenues in years of weak economic activity. 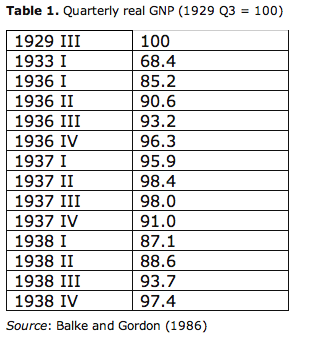 In early 1937, there was still an output gap, estimated by Balke and Gordon (1986) to be around 15% of GNP, but there was a widespread feeling that the depression was over. The focus of policymakers was shifting to concerns about future inflation and a return to a balanced budget. The Federal Reserve was worried by the build up of substantial excess reserves in the banking system while on the fiscal side the ratio of the national debt to GDP had risen from 16% in 1929 to 40% by 1937.

The Federal budget was returned close to balance in 1938 following increases in income tax rates in 1936, and the introduction of social security taxation from January 1937. There was also a cut in spending from a 1936 spike caused by a one-off payment of Veteran’s Bonus. The implication was a discretionary fiscal tightening amounting to over 3% of GDP, according to estimates by Larry Peppers (1973). On the monetary side, a new policy of sterilising gold inflows was adopted in December 1936 and reserve requirements for the banks were doubled in three stages from August 1936 through May 1937. The Federal Reserve Bank’s rhetoric changed to highlighting dangers of inflation. An analysis by Velde (2009) suggests that these policy changes were sufficient largely to explain the recession which NBER dates as running from May 1937 to June 1938. As can be seen in Table 1, there was a steep decline in real GNP which fell by about 11%. Industrial production was down by over 30% and investment by over 50% while share prices declined by over 40%. Inflation ceased and prices started to fall again. This was a big reversal and the contraction in economic activity was at similar rates to the early 1930s.

The recession ended when reserve requirements were eased, gold sterilisation ceased, and the balanced-budget policy was dropped as government spending was increased by $2 billion.

It is reasonable to suppose that the fiscal multiplier is quite high when interest rates are low and there is less scope for crowding out, as is confirmed by the review of theory and evidence provided by Robert Hall (2009). This was probably true in the late 1930s as Robert Gordon and Robert Krenn’s estimate of a multiplier of 1.8 in 1940 suggest (Gordon and Krenn 2010). If fiscal consolidation was to be attempted, then expansionary monetary policy was needed to compensate for its deflationary impact. Instead, the American economy was hit with a double whammy. An important aspect of the changes in policy stance in 1936/7 was the impact through undermining inflationary expectations with the implication that real interest rates rose steeply according to Romer. Eggertsson and Pugsley (2006) find that quite small changes in public beliefs about the government’s future inflation target would have had significant effects on output with nominal interest rates abnormally low.

The key message here for policymaking in the current situation is not that fiscal consolidation should be postponed. Rather, it is that exit strategy needs to focus on providing monetary support for aggregate demand as fiscal stimulus is withdrawn.

This has been a feature of successful fiscal consolidation efforts in OECD economies in recent times when interest rate cuts have been part of the overall package. Now, as in the 1930s, there is no scope to cut nominal interest rates. The requirement then is to operate on real interest rates and to seek to embed expectations that prices will rise. This suggests that further quantitative easing may be appropriate and that thought should be given to suspending inflation targets in favour of price level targets.

In the recent crisis, we believe that the aggressive response made by US and other policymakers was a massive improvement compared with the catastrophic errors made in the early 1930s. Accordingly, we have gone through a Great Recession rather than a re-run of the Great Depression. Important lessons from economic history relating to containing the downturn have been well-learnt. However, the 1930s has more to offer in terms of relevant experience for today with regard to managing the recovery. Those who would like to learn more can turn to our survey paper written as an introduction to a collection of articles which seek to bring the lessons of the 1930s from the specialist literature to a wide audience (Crafts and Fearon 2010).