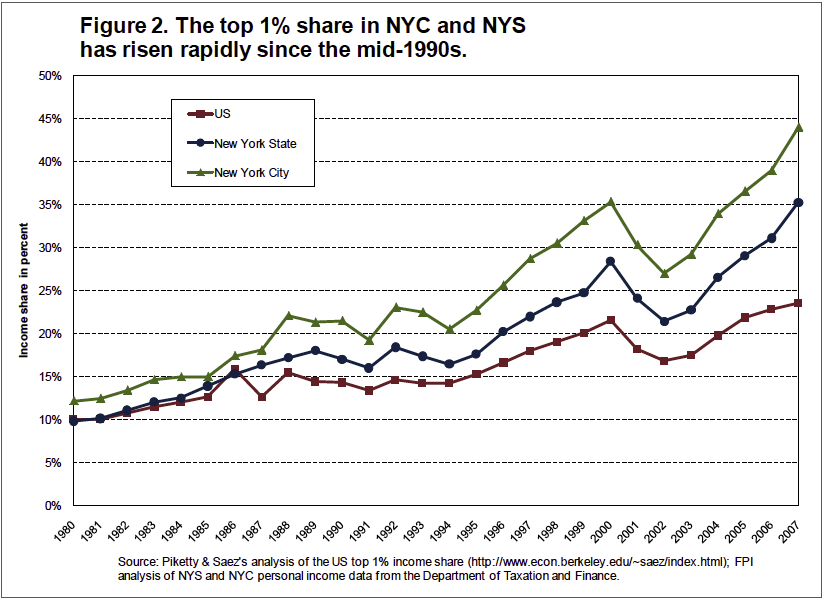 New York’s top one percent has an income share that one and a half times as high as the 23.5 percent historically-high national level….The city used to have a broad middle class, rooted in a vast manufacturing sector and mid-level positions in corporate headquarters as well as in education, government, construction and other good-paying blue-collar jobs. But manufacturing is about one tenth the size it used to be, and the city’s labor market has seen the disappearance of thousands of middle-paying jobs and the growth in their place of moderate- to low-paying jobs, mainly in services.

Given its degree of inequality, if New York City were a nation, it would rank 15th worst among 134 countries with respect to income concentration, in between Chile and Honduras. Wall Street, with its stratospheric profits and bonuses, sits within 15 miles of the Bronx—the nation’s poorest county.

And if you think that the rising tide of burgeoning financial services profits has improved the living standards of those at the bottom, think again:

The concentration of income growth at the top does not necessarily mean that those below the top are not experiencing real income gains and generally rising living standards… However, over the period from 1980 to 2007 in New York, when total inflation-adjusted income in the state grew an average of 2.1 percent a year after adjusting for population increase, incomes for those in the bottom half of the income spectrum generally declined while those in the middle income range rose but at only a fraction of the pace of total income growth.

In addition, taxes do little to redistribute income:

Because the city has a mildly progressive personal income tax, high-income residents pay a lot in New York City taxes. However, when local sales and property taxes are factored in, it does not appear that high income residents pay more than their proportionate share in local taxes. In fact, as discussed later, they pay a smaller share of income in local taxes than residents in the middle of the income structure.

The reason rising income disparity matters, as we have discussed before, is that highly unequal societies produce poor outcomes on virtually all social indicators – mental health, crime, teen pregnancy, lifespan – to such a degree that it has a negative impact even on those at the top of the foodchain. But no one in the kleptocracy wants to hear that message.