As much as a whole bunch of bank executives and securitization industry types have given Congressional testimony in which they maintained that they were duly concerned about “technical” errors like robo signing and would clean up their act, it appears that follow-through has been less than stellar.

New York State responded relatively promptly and imposed new requirments. On October 20, it issued a new rule requiring attorneys in foreclosure actions to certify that they have taken reasonable steps to verify the accuracy of documents they submit to the court. Although that might sound a tad redundant (aren’t they supposed to be doing that now?), the preamble to the new requirement discussed some of the practices that were cause for concern:

N.B.: During and after August 2010, numerous and widespread insufficiencies in foreclosure filings in various courts around the nation were reported by major mortgage lenders and other authorities. These insufficiencies include: failure of plaintiffs and their counsel to review documents and files to establish standing and other foreclosure requisites; filing of notarized affidavits which falsely attest to such review and to other critical facts in the foreclosure process; and “robosignature” of documents by parties and counsel. The wrongful filing and prosecution of foreclosure proceedings which are discovered to suffer from these defects may be cause for disciplinary and other sanctions upon participating counsel.

Today, StopForeclosure.com published that a single judge, Peter Cohalan, had denied 127 foreclosures under this new provision. Although the site did not offer any commentary, it appeared to regard this development as positive.

I see it as the reverse. Despite some jurisdictions taking a tougher stand and banks piously saying that they had cleaned up their “procedural” problems, it appears relatively little has changed on the ground. Rather than file the required certifications, the lawyers on these cases apparently figured they’d proceed as usual, which puts the onus on the judge to enforce. Or perhaps they are simply playing the odds, and assuming this issue will come up only on contested foreclosures, and those are few enough in number that the cost of delays in those cases is more than offset by the savings on the ones that are rubber stamped by the court.

ForeclosureFraud gives another New York sighting of a failure to provide the needed certification, this time before the famously tart Judge Schack. The bank lawyer’s explanation that it was his client’s, meaning Citigroup’s fault, did not go over very well:

In this foreclosure action, plaintiff, CITMORTGAGE, INC. (CITI), moved for summary judgment and an order of reference for the premises located at 38 Norwood Avenue, Brooklyn, New York (Block 3905, Lot 28, County of Kings). On October 25, 2010, the case was on my motion calendar for oral arguments. The matter was adjourned, pursuant to a short form order, on consent to today. Plaintiff CITI’s counsel agreed to file the affirmation required by the Chief Administrative Judge for foreclosure cases, as per the October 20, 2010 Administrative Order. Plaintiff’s counsel informed the Court, today, that he did not have the affirmation because CITI did not have in place, prior to November 8, 2010, procedures to comply with the Administrative Order of Chief Administrative Judge Ann T. Pfau. The Court does not work for CITI and cannot wait for CITI, a multi-billion dollar financial behemoth to get its “act” together. [*2]

Therefore, to prevent the waste of judicial resources, the instant foreclosure action is dismissed without prejudice.

While New York is providing a window on whether foreclosure mills are really changing behavior, sightings in other jurisdictions suggest not as much as bank PR would lead one to believe. For instance, in Florida, Default Law Group filed a “Motion to Ratify Summary Judgment“, which evidently is novel from a procedural standpoint, and included an argument that the previous affidavit was not a fraud on the court. But the law firm then canceled the hearing on that motion (maybe they realized it might not be too smart to have the judge turn down the motion, since it might be construed to be a ruling on the matter of the affidavits being an abuse). Another judge also questioned the validity of “ratifying” a motion for summary judgment. (Note that Florida plans to raise the summary judgment bar as of January 3 by requiring plaintiffs in foreclosures to attach copies of payment records to summary judgment filings).

Admittedly, we are only in the early stages of the post robo signing adaptation by banks and servicers, so the situation bears monitoring.

This testimony before the House Judiciary Committee by Thomas Cox, the attorney who brought GMACs’ robo signing to national attention, explains why these “procedural” matters are crucial: 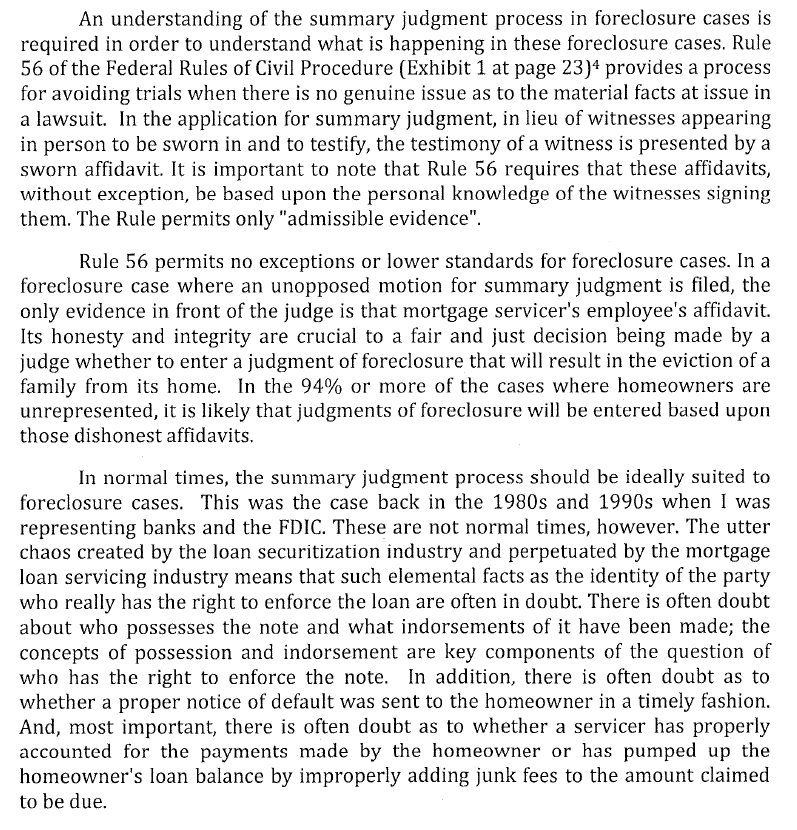