There has been evidence here and there of a marked fall in new foreclosure filings. Lender Processing Services, which handles more than half of the loans serviced in the US, said its revenues in its Default Services Group were down in the final quarter of the year. Why? Its revenues are tied to initial foreclosure filings, and its were off 33%, no doubt in large measure due to the robo signing scandal. Recall that it led many banks to halt foreclosures (some all over the US, others in judicial foreclosure states only) while they inspected the state of play and scrambled to revamp procedures. Banks piously claimed that they found no problems in the correctness of foreclosure actions and that ex making the changes needed to assure affidavits were proper, they were going to be back to business as usual post haste.

Now we already know that that isn’t the case. Since the robosigning scandal broke, foreclosure activity has been down. RealtyTrac reported that foreclosures in January were up only 1% over December levels, which was down 17% from the year prior.

But RealtyTrac captures every foreclosure filing in that particular report, so it is a mix of new foreclosure filings plus additional filings for foreclosures already underway (the number of filings required varies by state, but the minimum number is three, and the number can also be increased if a borrower gets a foreclosure suspended, say by entering into a payment catchup plan, and then has the process restarted later on).

Lynn Syzmoniak of Fraud Digest provides a snapshot for January 1 through January 26 in two counties in Florida, Lee County and Palm Beach County: 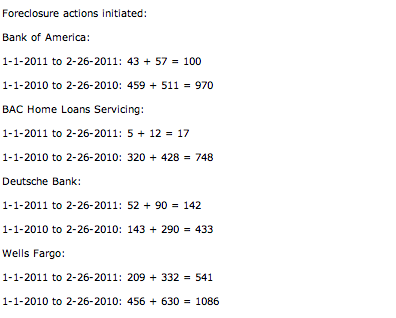 Her tally for US Bank over the same period covered only Lee County, but showed similar results: 42 new foreclosures for 2011 versus 143 for 2010.

Now merely eyeballing this sample, and assuming it is representative of Florida (Syzmoniak says other counties show similar patterns), it’s clear the decline is bigger than the 33% fall that LPS mentioned for the fourth quarter of 2010 or the 17% figure from RealtyTrac.

There are reasons why Florida might show a steeper fall than other states. First, the state AG has been investigating all the major foreclosure mills in the state. Some, like the Law Offices of David Stern, have effectively folded. So there could be a bit of disarray simply due to the loss of some processing capacity.

Second, Florida, like New York, has implemented a rule requiring that attorneys verify information provided in foreclosures. That might seem to be merely ceremonial, since lawyers are already responsible for the accuracy of information provided to the court. But I am advised that this measure is more than mere belt and suspenders; it apparently would have the effect of lowering the bar for opposing counsel calling for Rule 11 sanctions if he thought the foreclosing attorney was submitting bogus documents or information. That rule did became effective February 11, 2010 (hat tip Lisa Epstein), and the foreclosure mills have tried to escape compliance. I’d imagine in the wake of the robo signing scandal, their clients are becoming less tolerant of this sort of thing.

If this pattern holds across at least across judicial foreclosure states, it suggests what we have long argued: that failures to convey loans as required by securitization documents are widespread, if not pervasive. Now that servicers and foreclosure mills are finding that a lot of judges no longer take them at their word, which means they increasingly have to provide documentation, they may be finding that a lot of their records do not pass muster. And while document fabrication was once an easy way out, that strategy is a lot riskier than it used to be.

Reader input welcome. Do you have any local data on the level of new foreclosures in 2011 versus same period 2010?