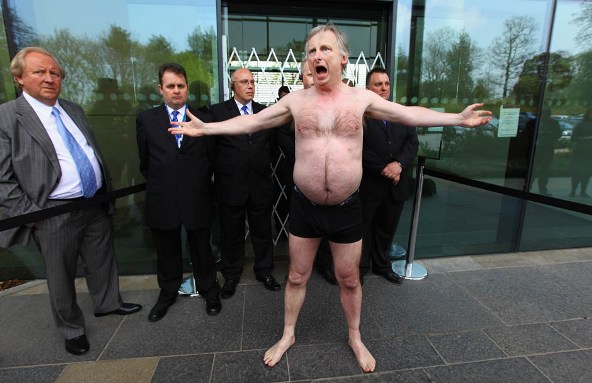 By Ian Fraser, a financial journalist who blogs at his web site and at qfinance. His Twitter is @ian_fraser. He is not related to Kit Fraser.

I missed this extraordinary scene. When the aspiring politician Kit Fraser stripped to his boxer shorts outside RBS’s annual shareholder meeting last Tuesday, I was already inside the meeting, listening to chairman Sir Philip Hampton defend the bank from shareholder allegations that he had lost the plot on pay.

The AGMs of Britain’s bailed out and recently nationalised banks have become increasingly colourful affairs, with disgruntled small shareholders complaining vociferously about shoddy standards of service, “obscene” bonuses awarded to traders and investment bankers as well as about the banks’ abuse of small and medium-sized corporate customers. Outside, a range of special-interest groups try to outdo each other to grab the media’s attention with colourful displays of grievance.

The mood inside Tuesday’s meeting was uglier than any I remember in the past decade, with many investors enraged that the bank was paying out £1.1bn in bonuses – including a total package of £7.7m to chief executive Stephen Hester.  The bonuses wiped out any profit at the Edinburgh-based institution.

Many observers are baffled by the bank’s decision to reward staff so handsomely at a time when the bank remains heavily dependent on taxpayer support and remains loss making. After paying the bonuses it made a loss of £1.1bn loss in 2010 (down from a loss of £24bn in 2008 and £3.6bn in 2009).  The fact the bank is behaving like this at a time of national austerity when the UK’s public sector is facing massive spending cuts, – and when investors aren’t getting any dividends – fuelled the palpable anger inside the meeting.

Small shareholder Ken Cramond told RBS directors had an “inflated idea of their own importance”. He added:

You’re not irreplaceable, you’re paid too much. Can you and Stephen Hester answer how you can justify your bonus when frankly customer service is going down the toilet?

Another shareholder, Tom Weir, said the bonuses paid out by the bank were:

Really obscene to the degree of greed and corporate theft …You should not be paying yourselves anything until the debt is paid off to the government and to the people. [chief executive] Mr Hester has got his £7.7 million because it is agreed by the cabal in London.

RBS chairman Sir Philip Hampton tried to claim “we are all in this together” but this was met with derisive laughter from some the audience.  His consistent line of defence was to say that if the bank didn’t pay the market rate for traders, etc, it would be unable to compete with other banks. In his opening remarks he said:

In order to deliver this goal [returning the bank to an even keel] we need talented and motivated people and we need to be able to pay them fairly.

Hampton, a polished performer under fire, also insisted that UKFI, the arms-length agency that holds the British government’s 83% stake in RBS, institutional shareholders and other stakeholders, “generally recognise the need to make a commercial judgment on this issue.” He added:

It is important to remember we have to motivate all staff and that only a tiny minority were responsible for the problems RBS encountered, all of whom have now left.

Hampton also talked of an international market for talent, but this line has been widely rubbished by serious thinkers including the late, great Alastair Ross Goobey, as “so much hooey“. Under pressure, Hampton admitted that he found the payment of bonuses “hard to justify”, echoing remarks he made in January about the “gangmaster culture” in investment banking three months ago. But he just felt he had to pay them or risk seeing an exodus of talent.

Since it was nationalized in 2008, RBS has transferred £230.5bn of its more toxic loans in the UK government’s Asset Protection Scheme (APS), a state subsidized repository or “bad bank”. If the value of these duff assets falls, the bank is expected to absorb the first £60bn of losses. Any further losses would be shared by RBS and the government, with RBS taking 10% of the loss, and the government 90%.

However the questionable arrangement, launched in the dying days of Gordon Brown’s regime, has come into the firing line in recent days. On Wednesday, the House of Commons Public Accounts Committee said that RBS and Lloyds Banking Group — which was initially going to park its own toxic crap in the APS but got cold feet — had “failed to provide robust data about the state of their balance sheets”. Margaret Hodge MP, chairman of the committee said:

…We found this alarming. It places a question mark over the standards and practices of the banks themselves, and whether or not there was effective oversight by regulators and the banks’ own auditors.

To return to the annual general meeting: towards the end of the session, Nigel Henderson, a shareholder and a former hotelier from the historic Scottish coastal town of Montrose, gave an eloquent and impassioned speech about what he sees as the bank’s questionable history of wrongfully expropriating the assets and businesses of small and medium-sized corporates.

Henderson, together with other corporate customers known as “Baker’s Dozen” claim they have incontrovertible evidence that RBS has nicked their businesses by arbitrarily shortening payback periods and amending the terms and conditions on loan agreements without notice. Henderson said:-

The conduct of a significant number of employees in your bank would make even the most crooked, unscrupulous and despicable back street loan shark appear as a paragon of virtue. Yes, the jackboot culture is alive and kicking – literally as well as metaphorically within your bank, despite your pious statements.

All the financial hacks in the room religiously downed their pens at this point, clearly believing such claims would be of no interest to their readers.

The meeting was wrapped up with the voting. UKFI — which as I’ve explained in earlier blog posts is an ethical wasteland and a useless institution — weighed in behind the bank’s board and backed all the resolutions, which some commentators believe must have been quietly approved of by the chancellor of the exchequer George Osborne.

In the end, all 22 resolutions were passed with more than 99% of votes cast. In its live blog on proceedings the Telegraph noted, “Robert Mugabe would be happy with that type of result.”

Kit Fraser may seem like some half-crazed prankster. But having spoken to him after the event, it’s clear that he is a serious would-be politician. He has formed a new single issue party called the Ban Bankers’ Bonuses Party and is seeking election in the Scottish Parliamentary elections on May 5th.

In its manifesto, the BBB Party, which is also fielding a candidate in the West of Scotland region, said that if its elected it would:

commission a full public inquiry into the failure of the banks, to include the role of the central banks, the impact of fractional reserve lending, the effect of the derivatives bubble in the global monetary system, and how these circumstances affect the Scottish people, communities, and public and private organisations

No other UK political party that I’m aware of is promising such a profound probe. If he gets in, Fraser – who owns the Hootenanny and Joy of Talk restaurants in Inverness, and is a scion of the aristocratic Frasers of Lovat dynasty – intends to use his parliamentary seat as “a platform to campaign for bank reform”. A first step would to seek to mobilize customer power to force state-rescued banks including Lloyds Banking Group and RBS to stop all bonus payments to their staff, using the threat of Dutch-style massed withdrawal of deposits.

It’s an amazing precedent. This is not wild theory or abstract rubbish, it is something that actually happened, something we can do.

Fraser seems confident that what happened with ING in March could easily be replicated in the UK.