Reader Valissa pointed to an article at Bloomberg which looks like an effort at hagiography gone flat. Titled “Central Bankers Worldwide Race to Save Growth in 72 Hours of Policymaking,” it tries to perpetuate the myth of the overlords of the money system as all powerful, concerned with the public good, and competent. But as we know, they are increasingly politicized, hostage to ideology, unduly concerned with the pet wishes of banks, and tend to deny the existence of problems until they are acute.

In the 72 hours after a Group of Seven conference call on Aug. 7, the Federal Reserve pledged to keep interest rates near zero through at least mid-2013, the European Central Bank intervened in bond markets and the Bank of England indicated it’s ready to add more stimulus if needed. Japan signaled renewed concern about the yen and Switzerland yesterday stepped up its fight to curb an “overvalued” franc.

Lets see….the FOMC had a regularly scheduled meeting and issued a statement that had three dissenters who wanted zero interest rate language that was open ended, meaning they though conditions were so lousy that they thought it was better not to commit to a time frame.

The ECB did step into the markets to buy Italian and Spanish government debt, but as far as we can tell, the intervention on Monday was the biggest and wasn’t consistent enough to put fear in the hearts of banksters, and their actions on Tuesday and Wednesday were smaller. Their hand was forced by the widening of Italian and Spanish bond spreads the week prior, when the EBC had indicated it was not going to buy that debt. In other words, markets took spreads to incipient crisis levels, the ECB took action only because the alternative looked worse. This isn’t pro-active or heroic, folks. And as various commentators have said, the EBC needs to be prepared to buy hundreds of billions of dollars of Eurobonds if it is to hold off the existential threat to the Eurozone. One of our colleagues with good contacts at the ECB has said it is too deeply steeped in Bundesbank sensibilities for that ever to happen.

The problem is that we have the same central bankers who steered their monetary systems into the iceberg in the financial crisis still in charge. Admittedly, the Bank of Japan is blameless, since its banks unlike its Eurozone peers, did not act as a ready market for toxic US subprime-related debt. The Bank of England, which was admittedly caught flat footed when Northern Rock failed, has been willing to stare down the banks, in sharp contrast with the ECB and the Fed, and has advocated, in no uncertain terms, having the banks broken up. Aggressive lobbying by the banks and the opposition of the Treasury served to check this initiative. And the Swiss central bank is raising capital levels to 20%, which is forcing accident-prone UBS to consider locating its investment banking business in another domicile.

Look at the market action today. The Euromarkets fell into a tizzy over rumors of a downgrade of France. Rating agency affirmations of the French AAA didn’t help. European bank stocks were hammered due to rumors about wobbles at SocGen, France’s second largest bank, and bank CDS spreads widened. Eurodollar interbank funding is drying up. US money market funds had been major suppliers of dollar funding to Eurobanks, and they have been pulling back. Chris Whalen also reported that US regulators are telling US banks to reduce credit exposures to Eurobanks. So much for the sort of central bank market-saving interventions that Bloomberg wants its readership to believe in. This regulatory intervention is like throwing gas on a smoldering fire.

We have the 5 year Treasury yield at an all time low of 0.9%, which our Jim Haygood describes as “awesomely pathological”. Even with the yuan at a 17 year high and gold at $1788, the dollar has not fallen out of bed, as some have anticipated. Even with yesterday’s decline, it is still well within recent trading ranges: 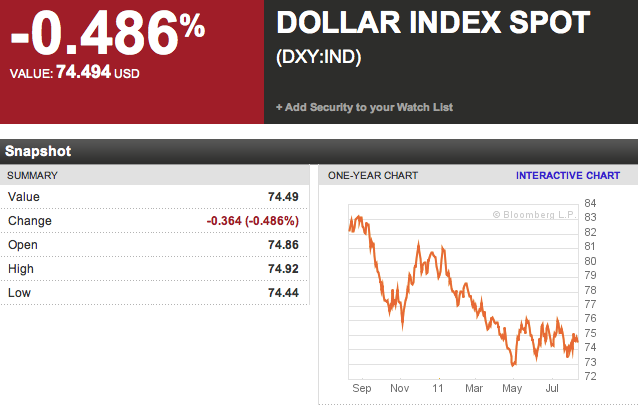 More as of this hour: S&P futures are up over 20 points (don’t you love these schizophrenic markets), and Asian markets trimmed earlier losses. The Nikkei is now down 0.63% and the Hang Seng down 0.93%.

But the bigger issue is that central bankers are not deserving of praise. They screwed up massively in the runup to the crisis, and only the central banks with strong institutional memories, namely the Bank of England and the Swiss National Bank, understand what the priorities are, which is preserving the integrity of the system, not particular players. Instead, the US regulators in particular have moved heaven and earth to try to prop up asset prices to keep the current incumbents looking solvent. That has not only entailed interventions that has made the public leery, such as QE 1 and 2, but the widespread belief that the authorities are intervening on a regular basis to keep stock indexes from falling out of bed (if so, that program has not been as successful as usual). These actions have all served to undermine faith in financial markets at a time when credit is a market based phenomenon, and conditioned too many participants to be nervous longs, investors with no conviction, happy to ride a trend, but quick to try to exit if conditions deteriorate.

There was no pretty path out of this crisis, but the better way was to get tough with the banks and use more aggressive fiscal stimulus to offset the contractionary impact. Part of why were are where we are is that remedies have been left to central bankers, and more liquidity simply fuels speculation if businessmen and consumers are nervous about conditions in the real economy.

Not only are investors more nervous about markets that are more and more subject to official intervention, but the Fed has come under increasing scrutiny from the Tea Party, which means the Bernanke put might not be there in full when investors have come to rely on it. The markets are beginning to feel like a patient with an infection that is resistant to antibiotics, and the medics are out of remedies. But all the Bloomberg of the world can do is cheer the officialdom, in the hope that placebo effect might provide some relief.

Update 5:30 AM: Holy shit. The perils of not having a real Bloomberg access. I have to depend on the kindness of friendly hedgies, in this case reader Scott. German CDS spreads have risen above UK CDS spreads and the Swissie has shot higher. The crisis has officially spread to the core.