No matter how you look at this development, it does not smell right. From JP Morgan’s website, hat tip Lisa Epstein:

JPMorgan Chase recently donated an unprecedented $4.6 million to the New York City Police Foundation. The gift was the largest in the history of the foundation and will enable the New York City Police Department to strengthen security in the Big Apple. The money will pay for 1,000 new patrol car laptops, as well as security monitoring software in the NYPD’s main data center.

“These officers put their lives on the line every day to keep us safe,” Dimon said. “We’re incredibly proud to help them build this program and let them know how much we value their hard work.”

Perhaps I remember too much of the scruffy and not exactly safe New York City of the 1980s, where getting your wallet pinched was a pretty regular occurrence. My perception has been that police-related charities have relied overmuch on the never-stated notion that if you didn’t donate, you might not get the speediest response if you needed help. As a mere apartment-dweller, I can’t imagine that anyone could scan incoming 911 calls against a priority list. But the flip side is if I owned a retail store and thought the beat police would keep an extra eye on it if I gave to a police charity, it would seem like an awfully cheap form of insurance.

But what, pray tell, is this about? The JPM money is going directly from the foundation to the NYPD proper, not to, say, cops injured in the course of duty or police widows and orphans. But that is how the NYPD Police Foundation works. From its website:

The New York City Police Foundation, Inc. was established in 1971 by business and civic leaders as an independent, non-profit organization to promote excellence in the NYPD and improve public safety in New York City.

Provides resources that are not readily available through other means – to date over $100 million has been invested in 400+ innovative NYPD programs;

Serves as a vehicle for tax-exempt gifts and grants from individuals, businesses, and philanthropies;

Is the first municipal foundation of its kind in the country, and serves as a model for similar organizations in other cities;

Is the only organization authorized to raise funds on behalf of the NYPD and;

Does not solicit by telephone or use telemarketers.

The Police Foundation works closely with the Police Commissioner to develop a strategic program agenda. The Foundation encourages and supports NYPD programs in two main areas:

Projects, research studies, and equipment to improve the effectiveness of police activities; and

Education, training and skill development to strengthen the partnership between the police and the public.

Given when the NYC Police Foundation was formed, it looked to have been a desperate move during New York City’s fiscal crisis (remember the infamous headline: “Ford to City: Drop Dead”?) When I moved to the city in 1981, pretty much everyone I knew who lived in a non-doorman building had suffered a break-in. Guiliani’s reputation was built on cleaning up a perceived-to-be unsafe city (which he did by hiring William Bratton). Even in the later 1980s, when I lived in a townhouse on 69th between Park and Madison (translation: good neighborhood), I’d be the first out of the building in the AM. The inner door to the townhouse was locked, the outer one was closed but unlocked. I’d always have to navigate my way out carefully so as not to waken the homeless person sleeping in the vestibule.

So while this effort to supplement taxpayer funding has a certain logic, it raises the nasty specter of favoritism, that if private funding were to become a significant part of the Police Department’s total budget, it would understandably give priority to its patrons.

And look at the magnitude of the JP Morgan “gift”. The Foundation has been in existence for 40 years. If you assume that the $100 million it has received over that time is likely to mean “not much over $100 million” this contribution could easily be 3-4% of the total the Foundation have ever received.

Now readers can point out that this gift is bupkis relative to the budget of the police department, which is close to $4 billion. But looking at it on a mathematical basis likely misses the incentives at work. Dimon is one of the most powerful and connected corporate leaders in Gotham City. If he thinks the police donation was worthwhile, he might encourage other bank and big company CEOs to make large donations.

And what sort of benefits might JPM get? It is unlikely that there would be anything as crass as an explicit quid pro quo. But it certainly is useful to be confident that the police are on your side, say if an executive or worse an entire desk is caught in a sex or drugs scandal. Recall that Charles Ferguson in Inside Job alleged that the use of hookers is pervasive on Wall Street (duh) and is invoiced to the banks.

Or the police might be extra protective of your interests. Today, OccupyWallStreet decided to march across the Brooklyn Bridge (a proud New York tradition) to Chase Manhattan Plaza in Brooklyn. Reports in the media indicate that the police at first seemed to be encouraging the protestors not only to cross the bridge, but were walking in front of the crowd, seemingly escorting them across:

The wee problem is that the police are in the street, and part of the crowd is also on the street (others are on a pedestrian walkway that is above street level). That puts them in violation of NYC rules that against interfering with traffic. Note the protest were aware fo the rules; they were careful to stay on the sidewalk on the way to the bridge.

Over 700 of the marchers were arrested, and the media has a rather amusing “he said, she said” account, with OccupyWallStreet claiming entrapment and the cops batting their baby blues and trying to look innocent. From the New York Times:

But many protesters said they believed the police had tricked them…

“The cops watched and did nothing, indeed, seemed to guide us onto the roadway,” said Jesse A. Myerson, a media coordinator for Occupy Wall Street who marched but was not arrested…all insisted that the police had made no mention that the roadway was off limits. Ms.[Annie] Day and several others said that police officers had walked beside the crowd until the group reached about midway, then without warning began to corral the protesters behind orange nets…

Where the entrance to the bridge narrowed their path, some marchers, including organizers, stuck to the generally agreed-upon route and headed up onto the wooden walkway that runs between and about 15 feet above the bridge’s traffic lanes.

But about 20 others headed for the Brooklyn-bound roadway, said Christopher T. Dunn of the New York Civil Liberties Union, who accompanied the march…They were met by a handful of high-level police supervisors, who blocked the way and announced repeatedly through bullhorns that the marchers were blocking the roadway and that if they continued to do so, they would be subject to arrest.

There were no physical barriers, though, and at one point, the marchers began walking up the roadway with the police commanders in front of them – seeming, from a distance, as if they were leading the way. The Chief of Department Joseph J. Esposito, and a horde of other white-shirted commanders, were among them…

A freelance reporter for The New York Times, Natasha Lennard, was among those arrested….

Earlier in the afternoon, as many as 10 Department of Correction buses, big enough to hold 20 prisoners apiece, had been dispatched from Rikers Island in what one law enforcement official said was “a planned move on the protesters.”

Etan Ben-Ami, 56, a psychotherapist from Brooklyn who was up on the walkway, said that the police seemed to make a conscious decision to allow the protesters to claim the road. “They weren’t pushed back,” he said. “It seemed that they moved at the same time.”..

He added: “We thought they were escorting us because they wanted us to be safe.”

The part I find more interesting, which has not been as well reported, is that some (many?) the protestors who used the walkway and got across the bridge were also corralled and not permitted to proceed to the Chase plaza. Greg Basta, deputy director of the New York Communities for Change, told me by phone, based on multiple reports from people who participated in the march, that as soon as protestors got to the Brooklyn side of the bridge, they were kettled. Greg was under the impression that there were construction barricades at the foot of the bridge which made it impossible for the marchers not to walk on the street. Because the focus has been on the what happened on the bridge, the coverage of what happened to the rest of crowd is sparse.

Some confirmation in passing comes from MsExPat at Corrente (apparently some of the very first off the bridge were permitted to proceed):

My friends and I made it to the Brooklyn side okay–we ended up with about 350 other marchers in Cadman Plaza, a lovely 19th century park. What I didn’t find out until later is that several hundred people behind me also got kettled and barred from going all the way to Brooklyn. So I was among the lucky marchers in the middle.

But notice even then that the procession to Chase Manhattan Plaza [correction, Cadman Plaza} was effectively barred. [Note JPM may have operations nearby, Bear Stearns had much of its back office there, and if the leases were cheap, JPM may have kept the space].

We simply don’t know whether the police would have behaved one iota differently in the absence of the JP Morgan donation. But it raises the troubling perspective that they might have. Richard Kline pointed out that that local policing was important protection against control by the elites:

The oligarchy specifically and the Right in general are far less strong in American society apart from what their noise machines and bankroll flashing would make one think. The great bulk of the judiciary remains independent even if important higher appellate positions are tainted. Domestic policing is, by tradition and design, highly decentralized, with a good deal of local control, making overt police state actions difficult, visible, and highly unpopular (think TSA). While the military is a socially conservative society in itself, it is also an exceptionally depoliticized one, with civilian control an infrangible value. Popular voter commitment to the nominally more conservative political party has never been narrower or more fragile.

So far, the JP Morgan donation is an isolated example. But the high odds of continuing deep budget cuts at the state and local level open up the opportunity for corporate funding of preferred services, and with it, much greater private sector influence on the apparatus of government. This is a worrisome enough possibility to warrant a high degree of vigilance by all of us.

Update 5:00 AM: Debra C, via e-mail, points to FreakOut Nation, which has screen shots to show how the New York Times edited the OccupyWallStreet story after it went live to make it less protestor friendly: 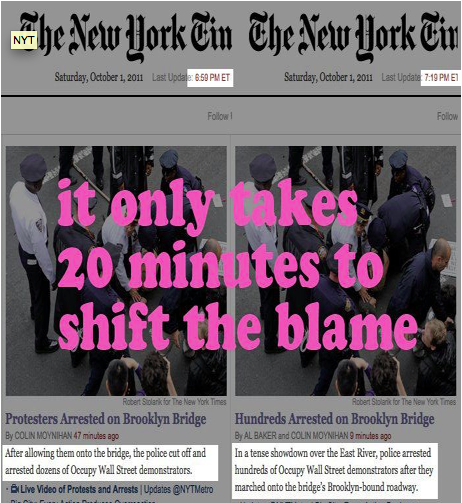