In waking a tiger, use a long stick.

Well, it looks like it could finally be happening. The Chinese housing bubble could well be bursting right before our eyes.

People have been calling the bursting of this bubble for a while now. But this is the first real indication I’ve seen that this particular house of cards – excuse the pun – is beginning to topple.

On Sunday Gordon G. Chang over at Forbes noted:

“Residential property prices are in freefall in China as developers race to meet revenue targets for the year in a quickly deteriorating market.  The country’s largest builders began discounting homes in Shanghai, Beijing, and Shenzhen in recent weeks, and the trend has now spread to second- and third-tier cities such as Hangzhou, Hefei, and Chongqing.  In Chongqing, for instance, Hong Kong-based Hutchison Whampoa cut asking prices 32% at its Cape Coral project.  “The price war has begun,” said Alan Chiang Sheung-lai of property consultant DTZ to the South China Morning Post.”

Conservative estimates say that property prices in China will fall by 10% next year, while some, such as Cao Jianhai of the Chinese Academy of Social Sciences, see potential price falls of 50%.

So, why did this bubble inflate and what will be the consequences if it deflates?

We could look at the superficial reasons as to why the bubble inflated – you know, the usual non-story of low interest rates and a boom in bank lending. But this is not the root cause – it never is. The real underlying cause is the same as that of the financial bubbles that have plagued our fair Western lands: income inequality.

When the rich stockpile money in bank accounts they often get a bit bored. They then get weary of tiresome productive investments and look around for a bubble to inflate. Property is the name of the game these days.

A 2008 World Bank report says it all. Not only is income inequality rising, but people in the urban centres are seeing their incomes rise much faster than people from the rural areas. You can see all these dynamics on the chart below which is taken from the same paper. 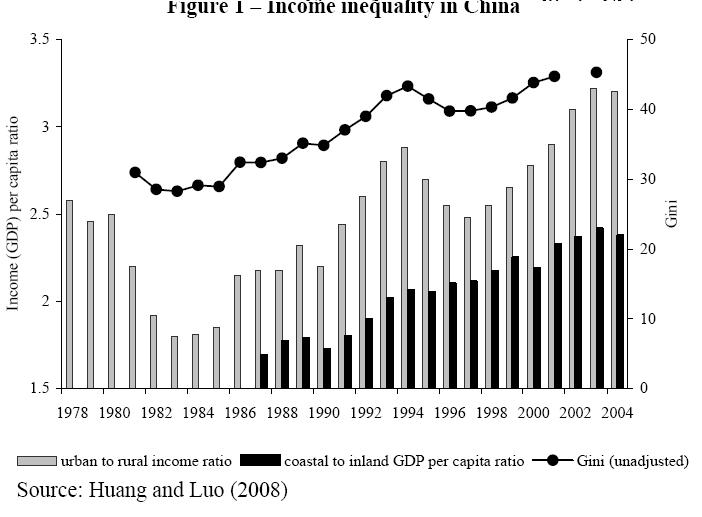 As we can see, the difference between urban and rural incomes rose sharply as China’s economic growth took off. In addition to this those on the coast saw their incomes rise substantially faster than those that live inland. This geographical dispersion of wealth likely exacerbated underlying trends, ensuring that wealth was concentrated in certain geographical centres that would then become hotspots for property speculation.

The bubble got a boost in 2008 when the Western finance-o-sphere melted down from… erm… another housing bubble. In response to flagging demand from the West, the Chinese government initiated a humongous stimulus package of $586bn. This stimulus kept the property market intact, together with the robustness of the Chinese economy.

But it looks like it’s all over now. How sad.

Is the housing bubble a paper tiger?

So, what happens when this thing falls apart? Worst case scenario: we get total meltdown. The Chinese banks would probably hit the wall, the economy would fall apart and China would finally have to deal with all those disgruntled and underpaid workers that have, until now, been off the streets only because they have crappy jobs.

In addition to all that domestic nastiness, the current commodities bubble would probably deflate and the Australian mining sector would grind to a halt – finishing off one of the only remaining English-speaking economies worth a damn. (There would also probably be a knock-on effect in that the Aussie property market would finally implode as well).

Well, the doomsayers are probably going to be a little peeved because in all likelihood the bursting of the Chinese property bubble will likely prove a paper tiger.

You see, we in the West seem to think that a financial crisis – and crises related to the extension of excessive credit – must be catastrophic for the real economy. But this is not so. If there is a strong government in place that operates under its own sovereign currency and has no childish qualms about increasing deficit spending, then pretty much any financial-ish crisis can be deficit-spent into oblivion.

As Bill Mitchell put it the other day in an excellent post about Western doomsday fantasies surrounding China:

“The Chinese government is the currency issuer and they demonstrated during the early stages of the crisis that they know exactly what they are doing with respect to using that monetary supremacy to maintain growth as one component of spending collapses.”

That says it all really. If the property bubble collapses, the Chinese government can simply extend and expand the already existing government construction projects. Hell for the environment, of course, but not so much for the Chinese worker. They can boost this with New Deal-style direct government works projects if they so wish. In fact, they can do pretty much anything they want to boost domestic employment and demand because they don’t have the likes of John Boehn-head cock-blocking them every time they try to get anything done.

This will probably provoke inflationary pressures, but given the choice between widespread unemployment – ‘unemployment’ being Chinese for ‘social unrest’ – the government will likely start to ignore it. Indeed, they will probably come to realise, if they haven’t already, that their inflation problems are likely due in large part to income inequality. This will spur them on to create the domestic consumption base that they sorely need. And if it doesn’t the inflation itself might just do the work for them in the coming decades.

Either way, the money currently be splurged on property will find its way into the domestic consumption base and into investing in productive capacity that supplies this base. The Chinese government can either do this directly through redistributive taxation policies or the inflation will take care of it by eroding the value of the upper-classes hoardings… erm… I mean ‘savings’. I’d favour the former, but if ignorance (and power-plays) win out the latter will suffice in the medium-to-long run. Just ask Latin America!

Yes, the property bubble in China looks like its bursting. But no, this will probably not prove to be a catastrophe. Instead, we in the West are going to get schooled once again, when our Eastern ‘comrades’ show us just how to run an advanced capitalist economy. History, eh? It’s just one big irony.