Yves here. Andrew Haldane is the most important thinker, bar none, on the financial services industry today. This piece by Haldane and Vasileios Madouros, a fellow member of the Financial Stability team at the Bank of England. contains a key statement that needs to be drummed into policy makers and commentators: “Bearing risk is not, by itself, a productive activity.”

Whilst few would argue that the financial crisis has not brought the real economy down with it, there is considerably less clarity about what the positive contribution of the financial sector is during normal times. This lead commentary in the current Vox debate on the issue focuses on the value-added of risk and government subsidies in national accounting, and makes an important distinction between risk-taking and risk management.

There is no doubting the financial sector has a significant impact on the real economy. Financial crisis experience makes this only too clear.1 Financial recessions are both deeper and longer-lasting than normal recessions. At this stage of a normal recession, output would be about 5% above its pre-crisis level. Today, in the UK, it remains about 3.5% below. So this much is clear: Starved of the services of the financial sector, the real economy cannot recuperate quickly.

But that does not answer the question of what positive contribution finance makes in normal, non-recessionary states. This is an altogether murkier picture. Even in concept, there is little clarity about the services that banks provide to customers, much less whether statisticians are correctly measuring those services.2 As currently measured, however, it seems likely that the value of financial intermediation services is significantly overstated in the national accounts, for reasons we now explain.

‘Excess’ returns in the banking sector3

The headline national accounts numbers point to a significant contribution of the financial sector to the economy. For the US, the value-added of financial intermediaries was about $1.2 trillion in 2010 – equivalent to 8% of total GDP. In the UK, the value-added of finance was around 10% of GDP in 2009. The trends over time are even more striking. For example, they suggest that the contribution of the financial sector to GDP in the US has increased almost fourfold since the Second World War.

At face value, these trends would be consistent with large productivity gains in finance. Pre-crisis, that is what the bald numbers implied. Measured total factor productivity growth in the financial sector exceeded that in the rest of the economy (Figure 1). Financial innovation was said to have allowed the banking system to better manage risk and allocate capital. These efficiency gains in turn allowed the factors of banking production (labour and capital) to reap the benefits through high returns (wages and dividends). 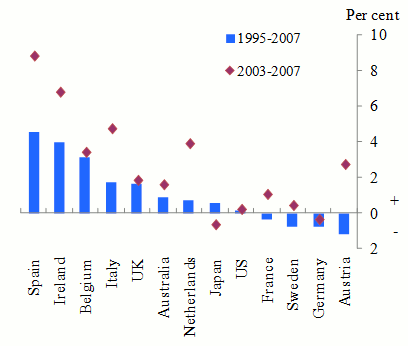 Notes: TFP estimates beased on the value-added approach and account for changes in both the quantity and quality of labour. A positive number implies higher TFP growth in financial intermedation relative to the whole economy.

But crisis experience has challenged this narrative. High pre-crisis returns in the financial sector proved temporary. The return on tangible equity in UK banking fell from levels of 25%+ in 2006 to – 29% in 2008. Many financial institutions around the world found themselves calling on the authorities, in enormous size, to help manage their solvency and liquidity risk. That fall from grace, and the resulting ballooning of risk, sits uneasily with a pre-crisis story of a shift in the technological frontier of banks’ risk management.

In fact, high pre-crisis returns to banking had a much more mundane explanation. They reflected simply increased risk-taking across the sector. This was not an outward shift in the portfolio possibility set of finance. Instead, it was a traverse up the high-wire of risk and return. This hire-wire act involved, on the asset side, rapid credit expansion, often through the development of poorly understood financial instruments. On the liability side, this ballooning balance sheet was financed using risky leverage, often at short maturities.

In what sense is increased risk-taking by banks a value-added service for the economy at large? In short, it is not.

The financial system provides a number of services to the wider economy, including payment and transaction services to depositors and borrowers; intermediation services by transforming deposits into funding for households, companies or governments; and risk transfer and insurance services. In doing so, financial intermediaries take on risk. For example, when they finance long-term loans to companies using short-term deposits from households, banks assume liquidity risk. And when they extend mortgages to households, they take on credit risk.

But bearing risk is not, by itself, a productive activity. The act of investing capital in a risky asset is a fundamental feature of capital markets. For example, a retail investor that purchases bonds issued by a company is bearing risk, but not contributing so much as a cent to measured economic activity. Similarly, a household that decides to use all of its liquid deposits to purchase a house, instead of borrowing some money from the bank and keeping some of its deposits with the bank, is bearing liquidity risk.

Neither of these acts could be said to boost overall economic activity or productivity in the economy. They re-allocate risk in the system but do not fundamentally change its size or shape. For that reason, statisticians do not count these activities in capital markets as contributing to activity or welfare. Rightly so.

What is a demonstrably productive economic activity is the management of risk. Banks use labour and capital to screen borrowers, assess their creditworthiness and monitor them. And they spend resources to assess their vulnerability to liquidity shocks arising from the maturity mismatches on their balance sheets. Customers, in turn, remunerate banks for these productive services

The current framework for measuring the contribution of financial intermediaries captures few of these subtleties. Crucially, it blurs the distinction between risk-bearing and risk management. Revenues that banks earn as compensation for risk-bearing – the spread between loan and deposit rates on their loan book – are accounted for as output by the banking sector. So bank balance-sheet expansion, as occurred ahead of the crisis, counts as increased value-added. But this confuses risk-bearing with risk management, especially when the risk itself may be mis-priced or mis-managed.

Indeed, a banking system that does not accurately assess and price risk could even be thought to subtract value from the economy. Buyers and sellers of risk could meet instead in capital markets – as indeed they have, increasingly, following the crisis. The national accounts would capture such a transfer as a fall in GDP. But to the extent that capital markets are at present better able to price and manage that risk than banks, the opposite is actually true.

There is a second, equally important, reason why the measured value-added of the financial sector in the national accounts may be seriously over-stated. We now know that the risk being taken by banks was not in fact borne by them, fully or potentially even partially. Instead it has been borne by society.

That is why GDP today lies below its pre-crisis level. And it is why government balance sheets, relative to GDP, are set to double as a result of the crisis in many countries.

But if banking risks are not borne by banks, they will not be priced by banks, or investors in banks, either. The implicit support of the taxpayer and society will show up as an explicit profits bonus to the financial system. Lower risk means lower funding costs, which in turn means fatter banking profits. If there are expectations that the government cavalry always stands at the ready, excess returns will be harvested both pre and post-crisis.

Elsewhere, we have sought to estimate those implicit subsidies to banking arising from its too big-to-fail status. For the largest 25 or so global banks, the average annual subsidy between 2007-2010 was hundreds of billions of dollars; on some estimates it was over $1 trillion (Haldane 2011). This compares with average annual profitability of the largest global banks of about $170 billion per annum in the five years ahead of the crisis.

Government subsidies – whether implicit or explicit – cannot be said to have added to economic well-being in aggregate. At best, they are a sectoral re-distribution of resources from the general taxpayer to the banks. If raising taxes or lowering government revenues has deadweight welfare costs, this transfer is actually welfare-reducing. That effect, too, is completely missed by existing statistical measures of the contribution of the financial sector.

If risk-making were a value-adding activity, Russian roulette players would contribute disproportionately to global welfare. And if government subsidies were the route to improved well-being, today’s growth problems could be solved at a stroke. Typically, this is not the way societies keep score. But it was those very misconceptions which caused the measured contribution of the financial sector to be over-estimated ahead of the crisis.

Risk-management is a legitimately value-added activity. It lies at the heart of the services banks provide. Today’s debate around banking and bankers has usefully rediscovered that key fact, amid the rubble of broken balance sheets and wasted financial and human capital. Investors, regulators and statisticians now need to adjust their measuring rods to ensure they are not blind to risk when next evaluating the return to banking.

For references and footnotes, visit the article at VoxEU