The denial about the existential nature of the Eurozone crisis seems to be lifting. The press has featured reports of companies and banks doing contingency planning for the possibility of a Euro dissolution or exits by some member states.

In keeping, the Wall Street Journal tonight reports that even central banks are starting to contemplate what had heretofore been unthinkable:

The first signs are surfacing that central banks are thinking about how to resuscitate currencies based on bank notes that haven’t been printed since the first euros went into circulation in January 2002…. 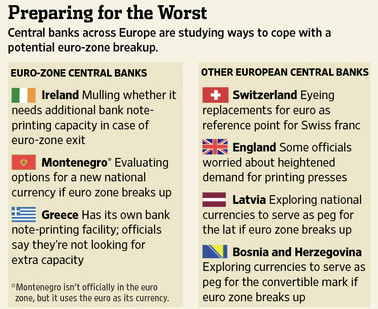 The central banks’ planning is preliminary,…

But the fact central bankers are even studying the possibility, which until this fall was considered unthinkable, underscores how swiftly conditions have deteriorated…

J.P. Morgan Chase & Co. put out a report Wednesday that advised investors and companies to hedge against a collapse of the euro zone—though the bank said the likelihood of that happening was just 20%. It said many corporate clients were buying currency derivatives to place bets against the euro.

It has been surprising to watch the disconnect between market action and the news coming out of the negotiations. The thing that needs to happen short term as a stopgap is for the ECB to monetize periphery country debt in a serious way. That would buy Europe the time to sort its house out, and in particular, determine how to address the large internal imbalance. Yet the Eurocrats seem to believe the answer lies in even harsher austerity, which is guaranteed to fail to lower debt to GDP ratios. And the news stories of the day show Merkel to be out of touch with priorities, talking about the need for treaty amendments to create a fiscal union, when that is not on the critical path. It has hit the point where the normally voluble Ambrose Evans-Pritchard has been reduced to terse, disgusted-sounding posts, apparently unable to suppress his distaste for what he is witnessing.

I don’t believe in making market calls, but given the big contraction in Italian bond yields on a thin gruel of news, professional investors seem keen to seize on any shred of good news to goose markets, especially since the year end is nigh. Even if the hoped for Yet Another Big Eurozone Rescue Plan of Friday turns out to be underwhelming, market participants are certain to try to seize on any cause for cheer. And with trading volumes thinning as the year closes, they may be able to keep the levitation game going for a while longer.