I’m still mystified as to the market reaction on Wednesday to the coordinated central bank effort at waving a bazooka at the escalating European financial crisis. But as readers pointed out in comments, the big move was overnight, in futures, when trading is thin, and there was no follow through when markets opened. And volume was underwhelming.

The officialdom in the US seems to have been slow to wake up as to the direct effects of the Eurobank wobbles on the US economy. I worked for the Japanese in the 1980s, did some work for the US ops of a major German bank in the 1990s, and the story of big foreign banks in the US is largely unchanged: they provide commodity credit (big corporate lending facilities and acting as participants in loan syndications) as their best route to breaking into more lucrative services at the same companies. So as the Journal noted earlier this week, Eurobank stress is leading to a big crunch on all sorts of lending activities.

I have to admit I didn’t believe the intervention could amount to as little as it seemed to in the announcement. Surely the ECB was also committing to buying more bonds? I figured there had to be more to this and there was some juicy intelligence in the foreign language press that wasn’t yet in the English language papers. Wrong. A short roundup of deserved skeptical comments.

So this looks to me like a non-event. Yet markets went wild. Are they taking this as a signal that substantive actions — like the ECB finally doing what has to be done — are just around the corner? Are they misunderstanding the policy? Was this cheap talk that nonetheless moved us to the good equilibrium? (If so, not enough: Italian bonds still at more than 7 percent)

Tony Crescenzi at Pimco focused on the litmus test: if the ECB isn’t changing posture, this was all a big head fake. Only the ECB can provide a real stopgap, and only far reaching changes (both some sort of fiscal authority and addressing internal imbalances) will provide a solution:

The provision of liquidity is no substitute for other actions that Europe must take to solve its current woes. The world continues to wait on European actions on fiscal rules, discipline, and enforcement, as well as use of the balance sheet that matters most in the current situation: the European Central Bank.

Even the normally discreetly cheerleading New York Times was up front in saying that this move was at best an expedient:

But policy makers and analysts were quick to caution that the Fed’s action did not address the fundamental financial problems threatening the survival of the European currency union. At best, they said, efforts by central banks to ease financial conditions could allow the 17 European Union countries that use the euro sufficient time to agree on a plan for its preservation.

“The European sovereign debt problem will not be solved only with liquidity,” the governor of Japan’s central bank, Masaaki Shirakawa, told reporters in Tokyo. He said that he “strongly” expected Europe to “push through economic and fiscal reform.”

European leaders, increasingly concerned by a deteriorating financial picture, said Wednesday they were forming a plan to convince markets that the debts of nations like Italy and Greece were not overwhelmingly large and to set new rules to constrain borrowing by euro zone members. They pointed to a scheduled meeting in Brussels on December 8-9 as a looming deadline for those efforts.

The provision of liquidity is no substitute for other actions that Europe must take to solve its current woes,. The world continues to wait on European actions on fiscal rules, discipline, and enforcement, as well as use of the balance sheet that matters most in the current situation: the European Central Bank.

There are also two elements to this story that appear to have gone underreported. As witnessed by the reports of strained credit in the US, dollar funding for Eurobank (remember, they need to fund in dollars to support dollar lending) was approaching crisis levels. This chart comes from the Guardian: 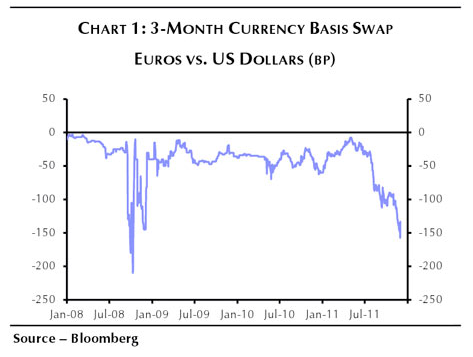 It’s rather easy to ignore the talk of the withdrawal of dollar funding from Eurobanks. We’ve been hearing about it for months, first money market funds pulling back from Eurobank repo and other exposures, then US bank examiners asking pointed questions of US banks regarding their lending exposures to Eurobanks. But the graph shows the condition suddenly became acute. So the action was really not about the reduction in interest rates on the dollar swap lines (Krugman correctly points out it really doesn’t mean much) but that the system was visibly seizing up, and the authorities were telling the markets they were on the case. But this needs to be put in context: this is giving a probably dying patient emergency oxygen when he needs to be put in intensive care.

Second, there is a very important note by Nouriel Roubini at the A-List section of the Financial Times. Roubini is back to being very good, another sign we are in full on crisis mode. His analysis is devastating: Italian sovereign debt needs to be written down, period. If the ECB steps in to buy Italian debt, the result will be that pretty much every private holder will hit its bid. And he doubts the ECB is prepared to balloon its balance sheet up the level of 1.9 trillion.

Now there is one way to improve the picture: the ECB could fund Italy at much lower bond yields. There would be an initial rush to hit the ECB’s offer, but that action would lead spreads on outstanding debt to tighten, producing profits for current holders and making Italy’s finances much more manageable (that does not necessarily mean no restructuring, it creates vastly more breathing room). But for some weird reason, this is a course of action the Eurocrats seem to have ignored. From Roubini:

With public debt at 120 per cent of gross domestic product, real interest rates close to 5 per cent and zero growth, Italy would need a primary surplus of 5 per cent of gross domestic product – not the current near-zero – merely to stabilise its debt. Soon real rates will be higher and growth negative. Moreover, the austerity that the European Central Bank and Germany are imposing on Italy will turn recession into depression…

Even if austerity and reforms were eventually to restore debt sustainability, Italy and countries in a similar position would need a lender of last resort to support them and prevent sovereign spreads exploding while they regained market credibility. But Italy’s financing needs for the next twelve months alone are not confined to the €400bn of debt maturing. At this point most investors would dump their entire holdings of Italian debt to any sucker – the ECB, European Financial Stability Facility, IMF or whoever – willing to buy it at current yields. If a lender of last resort appears, Italy’s entire debt stock of €1,900bn will be soon supplied.

So using precious official resources to prevent the unavoidable would simply finance the exit of others. Moreover, there is no official money – some €2,000bn would be needed – to backstop Italy, and soon Spain and possibly Belgium, for the next three years.

Even current attempts to ramp up EFSF resources from the IMF (which is reportedly readying a €400bn-€600bn programme to backstop Italy for the next 12-18 months), and from Brics, sovereign wealth funds and elsewhere, are bound to fail if the eurozone’s core is unwilling to increase its own contributions, and if the ECB is unwilling to play the role of an unlimited lender of last resort….

So Italy’s public debt needs to be reduced now to at worst 90 per cent of GDP from the current 120 per cent…There should be a credible commitment not to pay investors who hold out against participating in the offer – even if this triggers the payment of credit default swaps.

With appropriate regulatory forbearance, it would allow banks to pretend for a while that no losses had occurred and thus give them more time to raise fresh capital. Since about 40 per cent of Italy’s public debt is held by non-residents, a debt restructuring will also imply some burden sharing with foreign creditors.

Since we seem to have an international policy of “bondholders take no losses until the situation becomes completely untenable,” I don’t see a sensible resolution in the offing. The European leadership has lurched from stopgap to stopgap to avoid taking tough action. Now that the crisis is upon them, badly ingrained habits and tight timetables argue against happy outcomes.