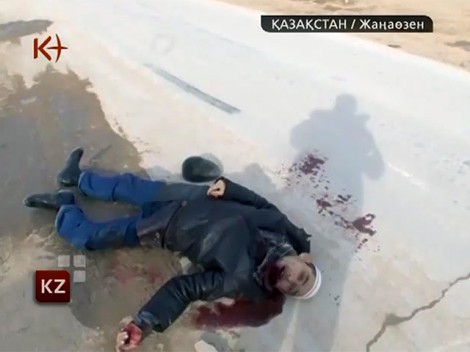 With violence and government crackdowns making headlines from so many familiar parts of the world, there’s hardly been a peep in the media about the biggest and ugliest massacre of all: Last Friday in Kazakhstan, riot police slaughtered up to 70 striking oil workers, wounding somewhere between 500 and 800, and arresting scores. Almost as soon as the massacre went down in the western regional city of Zhanaozen, the Kazakh authorities cut off access to twitter and cell phone coverage–effectively cutting the region off from the rest of the world, relegating the massacre into the small news wire print.

Keep in mind, the oil company whose workers are striking for better pay and union recognition, KazMunaiGaz, is “owned” by the billionaire son-in-law of Kazakhstan’s Western-backed president-for-life. Among Kazakhstan’s leading American partners are Chevron, whose website boasts, “Chevron is Kazakhstan’s largest private oil producer”–adding this bit of unintentional black humor:

“In Kazakhstan, as in any country where Chevron does business, we are a strong supporter of programs that help the community.”

Indeed. First, here is a video showing striking oil workers last Friday breaking up the totalitarian-state’s official celebration of its “Independence Day” (Kazakhstan was one of the 15 Soviet republics that declared independence in 1991; the republic’s Communist Party leader, Nursultan Nazarbaev, stayed on as the “democratic” ruler ever since). At about the 3:30 mark you’ll hear and see gunfire as the massacre is in full-swing:

Here is another video, the one that first went around last Friday that is more dramatic, showing the moment when the striking oil workers stormed the barricades and tore down their hated autocrat’s Independence Day stage…ending with gunfire and riot police moving into the square:

That went down on Friday. We know very little even today because the government clamped down on all communication with the outside world, cutting off cell phone communications and Twitter, imposing martial law, and bringing in special forces and riot police to terrorize Zhanaozen and other cities in the oil-rich west where sympathy strikes and protests have broken out. Journalists have been barred, and two reporters from reputable Russian online media outlets have been arrested. The government claims 15 dead; strikers, who have proven far more reliable, say at least 70 are dead and 500 wounded.

Even the brief and highly controlled “tour” arranged by the authorities for a handful of reporters in the aftermath produced this gruesome account:

Rights activists will likely also be concerned by what appeared to heavy-handed treatment of detainees at Zhanaozen’s main police station Sunday evening. Journalists at the station reported hearing screams coming from what appeared to be interrogation rooms, while a number of men with bloodied faces were lined up in a row in the corridors with their faces against the wall.

Reporters visiting the town under close supervision were not freely permitted to speak with detainees or residents.

Oil workers have been striking since the beginning of summer for the right to unionize, and for better pay. In response, the state-run oil company has already fired hundreds of workers for “violating labor laws,” while dividing up communities and the workforce. By September, workers who held out with the strike were on the verge of starvation; marriages were breaking up, and tensions were growing hotter. Amnesty International and Human Rights Watch came out criticizing the Kazakh authorities for their harsh treatment of the strikers and labor organizers. (Read this excellent English-language account here.) 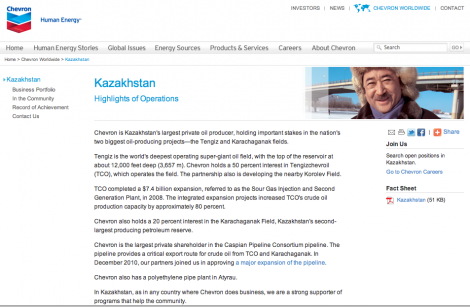 While the brutality translates into living Hell or violent death for locals, keeping those labor costs down has worked wonders for Chevron’s profits, as Forbes recently reported:

Chevron Rises To $104 As Kazakhstan Kicks Up Production

Chevron, the second largest vertically integrated oil major, has been expanding its operational foothold in the oil rich state of Kazakhstan over the past few years.

The nation’s vast unexplored resources of oil and gas have become a attractive destination for companies such as Chevron, Exxon Mobil and ConocoPhillips seeking new frontiers for oil and gas exploration.

Chevron has taken the early lead in establishing operations in the former Soviet republic with two major upstream projects as well as a manufacturing facility. The future expansion of operations in Kazakhstan is expected to add greatly to Chevron’s overall production output.

We have a $104 price estimate for Chevron which is a 6% premium over its current market price.

The oil majors’ fondness for Kazakhstan’s highly profitable oil may also explain photographs like this, showing Kazakh “SpetzNaz” or special forces troops sent in to crush protests–wearing helmets and brandishing shields that read, in English, “Police”:

Here is a video of the Kazakh SpetzNaz sent in to quash sympathy protests in the nearby city of Aktau:

Reports of torture are filtering in…and of roaming undercover police death squads in white jeeps hunting the streets for working-age males to pick up and intern.

Meanwhile, the protests are still going on throughout the country, the police crackdown is getting more vicious, and almost no one outside of Kazakhstan knows a thing about what’s going on there, because there are too many uprisings going on all around the world, uprisings that are twittered and cell-phone-cammed and YouTubed…and if your massacre and your oppression doesn’t make it to Twitter or isn’t uploaded onto YouTube, then it doesn’t exist, and you are all alone.

UPDATE: Kazakhstan is represented by the lobbying firm founded by former Mississippi governor Haley Barbour, which today goes by the name “BGR Gabara.” Among other things, the lobbying firm was busted working on a plan to smear Sting after he canceled a concert in Kazakhstan recently due to human rights abuses. Christ, he’s crap as it is, why smear the one half-way decent thing Sting ever tried doing? Lovely buncha guys, the Barbour Griffith & Rogers folks are.