Obama’s latest housing market chicanery should come as no surprise. As we discuss below, he will use the State of the Union address to announce a mortgage “settlement” by Federal regulators, and at least some state attorneys general. It’s yet another gambit designed to generate a campaign talking point while making the underlying problem worse.

The president seems to labor under the misapprehension that crimes by members of the elite must be swept under the rug because prosecuting them would destablize the system. What he misses is that we are well past the point where coverups will work, and they may even blow up before the November elections. If nothing else, his settlement pact has a non-trivial Constitutional problem which the Republicans, if they are smart, will use to undermine the deal and discredit the Administration.

To add insult to injury, Obama is apparently going to present his belated Christmas present to the banking industry as a boon to ordinary citizens. He refused to appoint a real middle class advocate, Elizabeth Warren, to the Consumer Financial Protection Bureau, but he’s not above stealing her talking points.

We and other commentators have discussed how the mortgage settlement negotiations nominally led by Iowa attorney general Tom Miller had descended into farce. Almost nothing the Miller camp said was believable. They were presented as “attorney general” discussions when the Administration was pulling the strings. They’ve described a deal as weeks away for over a year. They kept claiming that they had undertaken investigations when not a single subpoena was issued by the AGs still involved in the negotiations. They’ve argued from the get go that a pact will be good for homeowners when the deal reached by under-resourced Nevada attorney general Catherine Cortez Masto with a single servicer, Saxon, resulted in a payout that is 10 to 20 times what the Administration is calling a victory. And that assumes that the banks will live up to their side of the deal when past settlements of servicing abuses have shown that they don’t.

The administration has finally woken up to the fact that the housing mess is almost certain to get worse before it gets better, and Obama must therefore be armed with better propaganda. The Miller-led talks have become a bit of an embarrassment and needed to be put out of their misery. So Team Obama and Federal banking regulators have agreed on terms and as we discussed last Friday, are upping the pressure on state attorneys general to fall into line. As reported by Shahien Nasiripour of the Financial Times:

Banks and government negotiators have cleared a big hurdle in efforts to resolve allegations of widespread mortgage-related misdeeds, agreeing on terms for a settlement that are being circulated to the 50 US states for approval, state officials and a bank representative say.

State prosecutors have already received a set of documents detailing new mortgage servicing standards that the banks and the government negotiators have agreed to. The states were also being sent documents detailing other main components of the deal, such as the liability release for the banks, the so-called “menu” of options describing the various forms of aid to be given to borrowers, as well as the precise language of the so-called “most favoured nation” clause, which spells out how participating states in the deal would be eligible to receive more advantageous terms should a holdout state strike a more favourable deal on its own with the five targeted banks.

The story did not outline terms, but previous leaks have indicated that the bulk of the supposed settlement would come not in actual monies paid by the banks (the cash portion has been rumored at under $5 billion) but in credits given for mortgage modifications for principal modifications. There are numerous reasons why that stinks. The biggest is that servicers will be able to count modifying first mortgages that were securitized toward the total. Since one of the cardinal rules of finance is to use other people’s money rather than your own, this provision virtually guarantees that investor-owned mortgages will be the ones to be restructured. Why is this a bad idea? The banks are NOT required to write down the second mortgages that they have on their books. This reverses the contractual hierarchy that junior lienholders take losses before senior lenders. So this deal amounts to a transfer from pension funds and other fixed income investors to the banks, at the Administration’s instigation.

Another reason the modification provision is poorly structured is that the banks are given a dollar target to hit. That means they will focus on modifying the biggest mortgages. So help will go to a comparatively small number of grossly overhoused borrowers, no doubt reinforcing the “profligate borrower” meme.

But those criticisms assume two other things: that the program is actually implemented. The experience with past consent decrees in the mortgage space is that the servicers get a legal get out of jail free card, a release, and do not hold up their end of the deal. Similarly, we’ve seen bank executives swear in front of Congress in late 2010 that they had stopped robosigning, which turned out to be a brazen lie. So here, odds favor that servicers will pretty much do nothing except perhaps be given credit for mortgage modifications they would have made anyhow.

There are two clever features of the deal, but neither look intended to benefit ordinary citizens. One is that the deal throws some funding at chronically cash stressed mortgage counselors. They are thus certain to voice approval of the pact. The other is (per the FT story) the deal’s “most favored nations clause” is designed to reduce the bargaining leverage of any AGs that go their own way. It means that any servicer will have the incentive to fight hard against giving any state a better deal because it will automagically trigger improved terms across the states that signed on to the Federal deal. But this may have interesting perverse effects, since banks that refuse to settle with breakaway AGs will ultimately have damages awarded by a court. That means longer and most costly fights by the states, but in most cases, ultimately bigger awards (frankly, the fact set is so bad that all the state AGs need to do is focus on fairly conservative legal theories to have good odds of scoring big wins).

Dave Dayen seemed to think that the AG rebellion was likely to stay firm, given how few of the Democrats were going to Chicago on Monday for an arm-twisting meeting with HUD head Shaun Donovan and an unnamed emissary from the Department of Justice. I would not be so certain. With states so budget starved, I don’t see how anyone can justify sending a live body to Chicago when a phone briefing would work just as well. More important, the most favored nation clause is nasty, and may nudge some fence-sitters over the line.

And I have also been told that Donovan was on the Hill late last week pressuring Congressmen to support the deal. Since this is a regulatory measure that does not require Congressional approval, this move is meant to deprive dissenting state AGs from any support in local media from sympathetic Congressmen. For instance, 31 California representatives wrote the Justice Department, the Federal Reserve and the Office of the Comptroller of the Currency calling on them to “investigate possible violations of law or regulations by financial institutions in their handling of delinquent mortgages, mortgage modifications and foreclosures.” Clearly they could be expected to support California attorney general Kamala Harris’ withdrawal of the deal. Donovon is trying to get them and like minded solons speaking from the Obama script.

But the Administration’s scheme may not be playing out according to script. Senator Sherrod Brown sent a letter last week to associate attorney general Thomas Perelli, Donovan, the CFPB’s Richard Cordray and Tom Miller criticizing the settlement pact. It could have been written by Naked Capitalism readers. Key section: 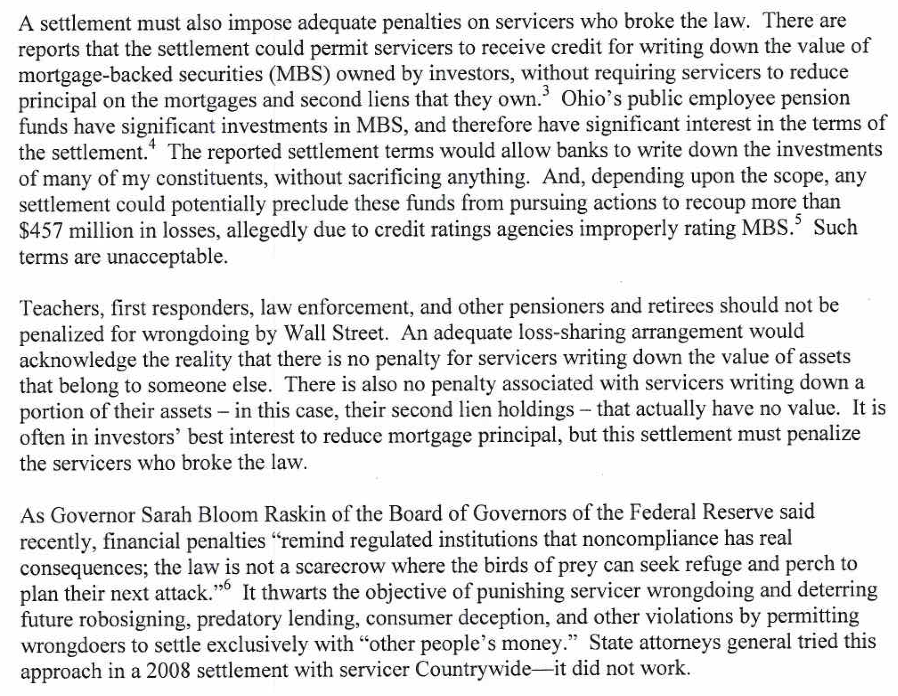 Now while Republicans may relish the specter of Democrats infighting, the fact is no one is going to want to be seen to be undermining the leader of the party in an election year. So that will put a damper on how aggressive the opponents will be. And media outlets have been amplifying Obama’s efforts to take credit for gravity. For instance, the Administration is touting the fall in foreclosures as an indicator of success when their policies have ranged from do nothing to disasters like HAMP. The fall in foreclosures is actually a sign of failure, as banks are attenuating the process more and more, in some cases due to their inability to come up with necessary documentation, in others out of a desire to wring even more fees out of investors (when a borrower can’t pay, the bank’s fees come first out of the eventual sale of the house).

Either a Gingrich nomination or Romney getting too dented during Republican primary fights increase the odds of what heretofore seemed impossible: an Obama win in November. So if the Republicans were smart, they’d take advantage of a serious weakness in this deal: that it violates the 5th Amendment takings clause. I am told by Bill Frey of Greenwich Financial that a servicer safe harbor provision in HAMP, which was supposed to shield servicers from investor lawsuits over mortgage modifications, was passed by both the House and Senate but was removed in reconciliation because that provision would have run afoul of the 5th Amendment. This settlement is intended to have servicers engage in even more aggressive mortgage modifications and would thus seem to have precisely the same Constitutional problem.

As I urged last week, please call your state attorney general and tell them you think taking from your pension to enrich banks for abusing homeowners is a lousy idea and they should therefore refuse to sign on to the settlement. You can find their phone numbers here. Please call today if you haven’t already. Thanks!