I’m behind on commenting on various opinion pieces, thanks to a mild case of food poisoning (ugh), but I wanted to take note of Paul Krugman’s current New York Times op ed, “Is Our Economy Healing?”

As an aside, Krugman has written a lot of good pieces lately that we’ve linked to on income inequality the disastrous austerian policies in Europe, and Republican derangement and duplicity. But he tends to cut the administration far more slack than it deserves.

His current piece voices cautious optimism on the prospects for the economy based on some strengthening in various economic indicators. But astonishingly, the core of his argument rests on the outlook for the housing market:

But the bubble began deflating almost six years ago; house prices are back to 2003 levels. And after a protracted slump in housing starts, America now looks seriously underprovided with houses, at least by historical standards.

So why aren’t people going out and buying? Because the depressed state of the economy leaves many people who would normally be buying homes either unable to afford them or too worried about job prospects to take the risk.

But the economy is depressed, in large part, because of the housing bust, which immediately suggests the possibility of a virtuous circle: an improving economy leads to a surge in home purchases, which leads to more construction, which strengthens the economy further, and so on. And if you squint hard at recent data, it looks as if something like that may be starting: home sales are up, unemployment claims are down, and builders’ confidence is rising.

Implicit in his discussion is that buyers are now irrationally pessimistic, and once the economy looks stronger, housing purchases will pick up.

Ahem. Let me use my rendering of a chart Krugman used in discussing oil prices in 2008: 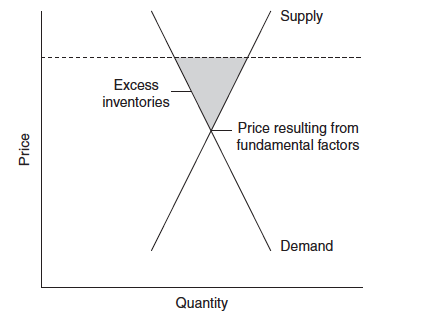 See the “excess inventories”? If prices are artificially high, you expect to see unusually high inventories. As we have written on this blog, there is a remarkably large number of houses that will probably be liquidated, ex a radical change in housing policy. Top analyst Laurie Goodman pegs “shadow inventory” at between 8 and 10 million houses; our Michael Olenick came up with an estimate just below 10 million.

There are large numbers of homes NOW where the borrowers are severely delinquent, and in some cases have been foreclosed on, yet the bank has not taken the house (usually on behalf of a trust in a mortgage securitization). Why? It would be nice to believe that the servicers are trying to help investors by slowly bleeding the housing overhang into the market, but this instead appears to be a cynical effort to milk investors of the maximum amount of fees. Even when a borrower languishes in the zombie land of non-payment, the servicer keeps ringing up his servicing fee and various other charges, such as late fees, broker price opinions (sometimes impermissibly charged to both the borrower and the investor). He eventually pays himself back from the sale of the house.

Now there are also reasons to question whether we will return to historical patterns of homeownership. High unemployment among recent graduates and the great difficulty unemployed middle aged people have in finding work means we may see a sustained reversal of household formation rates, and it may even go as far as leading to larger average household sizes. Extended families living together used to be not all that uncommon; it may go from being a sign of desperation to being seen as a smart way to economize and conferring other benefits (sharing child care duties, for instance).

Finally, the 30 year mortgage does not fit with job tenures that now (per a Yankelovich survey commissioned by McKinsey in the mid 2000s) of under 3 years. The traditional mortgage assumes that the borrower has a rising, or at least stable, income over his working years. We now have shorter jobs and longer periods of unemployment, which sap savings and make defaults more likely. And that’s before you factor in that the mortgage was normally a household’s top priority payment, but the inability to discharge student debt in bankruptcy effectively makes it “senior” to mortgage payments. All this suggests that it may be necessary to go against the pet wishes of the mortgage industrial complex and implement housing policies that do more to promote rentals.

It would be better if Krugman were right, but the monumental legal mess in the housing market, along with the terrible incentives built into the servicing business model, means a housing recovery is likely to be much slower in coming than he hopes.