Although Dave Dayen and Abigail Field have already given a well-deserved shellacking to a remarkable piece of bank PR masquerading as “insight” at Reuters, “Evidence suggests anti-foreclosure laws may backfire,” it merits longer-form treatment as a crude macedoine of anti-homeowner messaging.

The way Big Lies get sold is by dint of relentless repetition. In the wake of the heinous mortgage settlement, foreclosure fatigue has set in. A lot of policy people want to move on because the topic has no upside for them. Nothing got fixed, the negotiation process took a lot of political capital (meaning, as we pointed out, it forestalls any large national initiatives in the near-to-medium term), and Good Dems don’t want to dwell on a crass Obama sellout (not that that should be a surprise by now). But the fact that this issue, which ought to be front burner given its importance both to individuals and the economy, is being relegated to background status creates the perfect setting for hammering away at bank-friendly memes. When people are less engaged, they read stories in a cursory fashion, or just glance at the headline, and don’t bother to think whether the storyline makes sense or the claims are substantiated.

Just look at the headline: “Evidence suggests anti-foreclosure laws may backfire.” First, it says there are such things as “anti-foreclosure laws.” In fact, the laws under discussion are more accurately called “Foreclose legally, damnit” laws. Servicers and their foreclosure mill arms and legs have so flagrantly violated long-standing real estate laws in how they execute foreclosures that some states have decided to up the ante in terms of penalties to get the miscreants to cut it out. As Dayen points out:

No state law in this country disallows legal foreclosures. If the banks cannot substantiate ownership of the property, why is the finger pointed at the state laws that force that substantiation, and not the banks themselves? Nobody told them to lose ownership of mortgages, prompting them to falsify documents in an attempt to foreclose.

And how does a requirement to obey the law “backfire”? The claim is that it prevents foreclosures, and that in turn is keeping the market from “clearing.” Never mind that we found out how well Andrew Mellon’s “liquidate labor, liquidate stocks, liquidate farmers, liquidate real estate” prescription turned out. Notice the failure to consider alternatives besides foreclosure. The story gives one example of a borrower who got a mod in Nevada, which it suggests was due the passage of a law criminalizing improper foreclosures. But this example just hangs there, while immediately preceding it is a broker complaining how they don’t have enough properties to keep bottom fishers happy, and a defense lawyer saying he sees prospective clients trying to game the law. Each of these anecdotes has colorful quotes and align with the overall narrative.

Funny how there is nary a mention of the reasons banks have for wanting to draw out foreclosures: more servicing and late fees, deferral of recognition of losses on second liens. Nor is there any mention of how, in Las Vegas, I have been told by informed insiders that there are entire blocks in affluent areas where pretty much no one has paid their mortgage in over two years as of late 2010 with nary a foreclosure notice sent. Read that date: a lot of big ticket properties were being kept in limbo before the new law was passed. Similarly, Keith Jurow wrote in February:

In November 2011, Minyanville.com posted my 30-page New York City Housing Market Report. The report included never-seen-before charts, graphs and data that revealed what has been going on there. The banks have not been foreclosing for the past three years. This started well before the robo-signing mess. On February 7, 2012 there were a total of only 242 repossessed properties on the active MLS in Queens according to foreclosure.com. This is a borough with a population of 2.2 million.

Because of this, the number of seriously delinquent properties throughout NYC has been soaring. Based on individual charts for each borough from the NY Federal Reserve Bank which I included in my report, there were roughly 80,000 properties where the mortgage had not been paid in more than 90 days as of June 2011.

He found similar patterns in Suffolk County and Connecticut.

But what does the Reuters author Tim Reid want you to believe?

At the request of Reuters, RealtyTrac compared three states where borrower protection laws had prolonged foreclosures – Florida, New Jersey and New York – with three with fewer protections and where foreclosure completion times were shorter – Arizona, California and Virginia.

In the three states with the shorter delays, the average sale price for foreclosed properties has been trending higher, suggesting a recovery that has underlying strength.

Funny, Jurow debunked that in a May piece:

We hear that California markets are showing signs of revival and that prices are rising in certain markets. Let’s see. Here are the latest figures from trulia.com.

In Los Angeles, trulia reports that the average price-per square foot for homes sold in February through April was down 9.3 percent year-over-year for 3-bedroom homes and down 8.7 percent for 2-bedroom homes.

Price-per-square-foot statistics are the best way to compare prices because it does not matter how large the house is. Median prices are skewed by square footage as well as by the percentage of distressed properties sold.

And that recovery in Arizona? Banks are holding properties off the market:

Take a good look at this revealing chart for Phoenix from foreclosureradar.com.

Bank repossessions in Maricopa County plunged from 3,159 in April 2011 to a mere 767 a year later. Clearly, the banks are gambling that this will help to stem the decline of home prices….

During the height of the credit crisis in early 2009, 2/3 of all homes sold in Maricopa County were repossessed properties. That percentage was down to 40 percent a year ago. Take a look at this chart from Phoenix broker Leif Swanson. 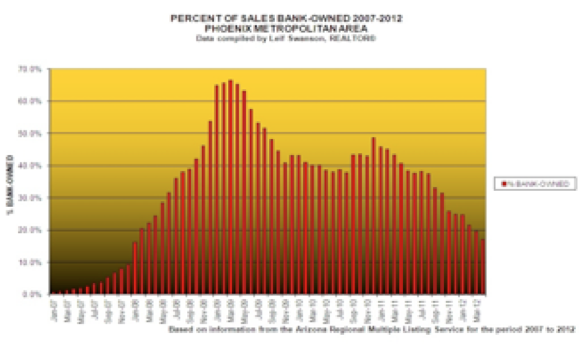 In April, only 17 percent of all homes sold in the Phoenix metro were REOs on the active MLS. Banks are hoping that this cutback of foreclosed properties for sale will steady home prices.

What about that Fed study?

A study by three Federal Reserve economists compared the foreclosure processes and outcomes for borrowers in the 20 “judicial” foreclosure states – where banks must seek court approval before they can foreclose – and the 30 “nonjudicial” ones, where such court oversight is not required…

Notice how the message is pounded in again and again: longer foreclosures are bad because they interfere with market operation. There are no offsetting considerations allowed, such as the damage to the integrity of land records in this country. (And how was this study conducted, anyhow? Did the authors adjust at all for state unemployment levels, or wage trends?)

By contrast, look at how Wall Street Examiner’s Lee Adler characterizes the situation:

Meanwhile, the mortgage servicing bankster mafiosi have figured out that by holding rather than dumping massive numbers of foreclosed properties, and even by slowing down the foreclosure process while allowing a few cramdowns in the form of short sales, the market has begun to rebound on its own. The bankster mafia know that placing massive numbers of properties on the market at once would crash the market and destroy the value of their portfolios, and essentially crash the financial system. So they have made a wise strategic decision not to self immolate.

Indeed, the Fed authors provide information that undermines their thesis:

Lauren Lambie-Hanson, one of the Federal Reserve economists, said delays in foreclosures had scared off potential buyers because prolonging the process raised doubts about how clean the title to a property was.

The “scared off” is meant to suggest that the buyers who were deterred were irrational. Hogwash. Title insurance companies have backed away from guaranteeing properties sold out of foreclosure. The truth, which the Fed economists refuse to admit, is the buyers who are concerned about title problems are clear-eyed about risk, while the economists think it’s swell to stick buyers with bum properties.

Read that twice. You can’t make that sort of crap up. This claim alone makes it a candidate for the Frederic Mishkin Iceland Prize for Intellectual Integrity. (If you want to see on a textual level what a shameless piece of propaganda this article is, read Abigail Field’s shredding. She goes line by line, or at least until it becomes too painful to read it that closely.) No, it isn’t the failure of the party responsible for managing a foreclosed property, the servicer, to secure and maintain the homes, that leads to blight. No, it’s the government, erm, the law.

And that is perhaps the most remarkable bit, the failure to consider that gutting the protections to the parties to a contract undermines commerce. Borrowers in judicial foreclosure states paid higher interest rates due to the greater difficulty of foreclosure. So now they are to be denied what they paid for because the banks recklessly disregarded the procedures they set up and committed to perform? What kind of incentive system is it when we reward massive institutional failure with a bank-favoring settlement and supportive messaging from central bank economists? As Dayen stated:

So when these officials argue against laws like those in Nevada, which merely criminalize a criminal practice, or California, which provides due process for people having their homes taken from them, they’re arguing in favor of what amounts to a dissolution of justice.