We’ve been mystified with the housing bull argument that things really are getting better. While real estate is always and ever local, and some markets may indeed be on the upswing, there are ample reasons to doubt the idea that an overall housing recovery is in. For instance, the recent FHFA inspector general report stated:

My rough calculation of their REO and delinquency numbers would indicate that they will have about 300,000 new REOs (acquisitions, in their parlance) per year for the next three years, assuming their isn’t a surge in new defaulters from their portfolio (ie – just using the loans currently seriously delinquent). They also report 179,000 properties currently in REO (end of 2011).

If they maintain their 2011 rate of REO dispositions at 353,000, the pipeline would be largely cleared in about 3 years. If they are able to increase the pace a bit, perhaps the inventory clears in 2-2.5 years.

Either way, it is very likely that about 1 million REO properties will be disposed of by the GSEs over the next 2-3 years. Over the last 3 years, they have disposed of about 833,216 REOs.

What will the impact on home prices be in the rate of REO disposition in the next 3 years matches or exceeds the rate of disposition of the last 3 years? I’d expect that it will be pretty negative.

Remember, that’s ONLY Fannie and Freddie mortgages. Recall that 1.1 million figure, serious delinquencies in their portfolios. Top housing analyst Laurie Goodman puts the total across the market at 2.8 million.

So why are we seeing so much housing cheerleading? One big “proof” is that housing inventories are supposedly shrinking. If you recall the classic supply/demand chart, if a price is higher than the market price, you expect to see big inventories somewhere. Conversely, if inventories are falling below a “normal” level (there are always some buffers in a system), that’s a sign of strengthening demand. 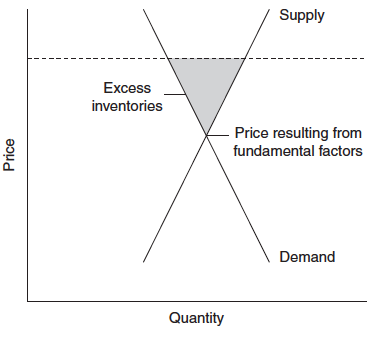 But we’ve seen so much evidence that the inventories that the commentators are looking at are misleading it isn’t funny. Banks were attenuating foreclosures even before the robosigning scandal broke. In the states with real housing distress, banks will take foreclosures up to the stage of actually taking title from the owner, and let it sit in limbo for a protracted period. But in addition to delays in real estate being taken into REO, there is also evidence of banks simply not putting real estate owned by securitizations, the GSEs, or the banks themselves, on the market, thus keeping it out of visible inventories. For instance, numerous NC readers report they see vacant homes, want to make an offer, and can’t find out who to contact to do so. That is a pretty strong sign that those homes are also not in official REO inventories.

And let’s consider the implications of that chart, again: if there ARE large inventories, that’s means supply is being constrained and the resulting “market” prices are above where they’d be based on fundamentals. So any price improvement is based not on improving conditions, but the manipulation of supply.

We finally have some official confirmation of our thesis. From AOL’s Real Estate blog, “‘Shadow REO’: As Many as 90% of Foreclosed Properties Held Off the Market, Estimates Suggest“:

As many as 90 percent of REOs are withheld from sale, according to estimates recently provided to AOL Real Estate by two analytics firms. It’s a testament to lenders’ fears that flooding the market with foreclosed homes could wreak havoc on their balance sheets and present a danger to the housing market as a whole.

Online foreclosure marketplace RealtyTrac recently found that just 15 percent of REOs in the Washington, D.C., area were for sale, a statistic that is representative of nationwide numbers, the company said.

Analytics firm CoreLogic provided an even lower estimate, suggesting that just 10 percent of all REOs in the country are listed by their owners, which include mortgage giants Fannie Mae and Freddie Mac as well as the Federal Housing Administration. As of April 2012, 390,000 repossessed homes sat in limbo, while about 39,000 were actually listed for sale, said Sam Khater, senior economist at CoreLogic.

Daren Blomquist, vice president of RealtyTrac, said that he was surprised by his company’s finding, especially since a similar analysis in 2009 found that banks were attempting to sell nearly twice as much of their REO inventory back then.

And the article presents the obvious conclusion, that keeping homes off the market is leading to higher prices than you’d see if they were put up for sale:

In fact, if lenders turn their REO release valve to full blast, the deluge of foreclosures cascading onto the market could plunge the country into a recession, said Thomas Martin, president of consumer advocacy group Americas Watchdog.

“If they let the dam essentially break. It could be a catastrophic disaster for the U.S. economy,” he said, predicting that some major banks would fail and home prices would nosedive by 20 percent.

That doomsday scenario has many industry professionals supporting lenders’ tactics of holding onto most of their REOs. Otherwise, they would be “causing the floor to fall out from underneath the entire market,” Faranda said. He added that banks don’t have the manpower to push the paperwork required to put all their foreclosures on the market.

Of course, the discussion focuses on how much price manipulation is justified, as opposed to the real problem: we have had, and continue to have, far too many foreclosures and far too few mortgage modifications. But the solution seems to be to zombify the housing market rather than make servicers change their ways.