The US equity market’s main risk measure is back down to the levels we saw in 2007. But declines in volatility mask substantially different behaviour from stocks than pre-crisis. 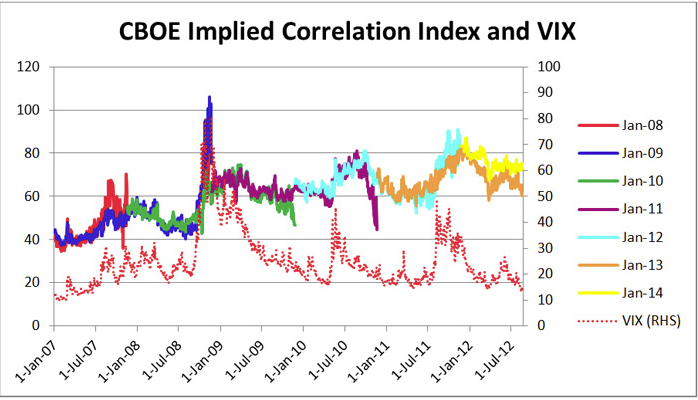 The Chicago Board Options Exchange’s VIX index, commonly known as the “fear gauge”, has fallen below 15 in recent days. These are levels the index last saw in 2007, before the credit crisis erupted. VIX is shown in the above chart as the dotted red line, measured against the right-hand axis.

But another benchmark calculated by the CBOE, the implied correlation index (which, like VIX, is based on the S&P 500 index’s constituent stocks) is nowhere near 2007 levels. In fact the average internal index correlation has been on a steadily rising trend.

Rising volatility and rising correlations at the same time shouldn’t surprise us. It’s commonly accepted that when markets take a plunge, as in 2007/08, stocks move increasingly in lockstep.

But declines in the VIX to below 20 in 2010 and 2011 and, now, to below 15, haven’t been accompanied by a fall in internal index correlation to anything near 2007 levels. In fact the implied correlation of the S&P 500’s constituent stocks is almost twice as high now as five years ago.

Two factors may be at play here. First, increased investor interest in index-based derivative products like futures and ETFs may well be causing stocks in a widely followed index like the S&P 500 to behave in a more synchronous fashion (not everyone agrees, but I think this argument makes sense).

This may be another example, in other words, of a growing “index effect” on equity market behaviour (chronicled by Jeffrey Wurgler in a recent issue of the Journal of Indexes Europe). Wurgler notes increasing valuation distortions in large-cap equity benchmarks like the S&P 500 and suggests that the increasing use of indexed portfolios is the prime cause for such anomalies.

But another type of exchange-traded product may also have played a role in pushing up index correlations.

Since the CBOE’s implied correlation index is calculated as the difference between the implied volatility of index options and the implied volatilities of options on the index’s component stocks, it’s possible that a rising correlation index could simply indicate that market participants have been overpaying for index options. And VIX-based ETPs may be behind this steady, valuation-indifferent “bid”.

One hedge fund, Och-Ziff, was reported last year as having taken the opposite side of the trade to VIX ETPs, placing a US$12 billion bet on US stock correlations having peaked. Och-Ziff wouldn’t be the only player in the market to have taken the view that purchasers of VIX trackers are effectively burning their money.

We’ve also written in the past that investors should avoid volatility trackers, at least the naive ones that incur huge roll costs. The increasing divergence between the value of index options and options on the index’s components is even greater reason to shun trackers like VXX, VXZ and their European equivalents.

But even if most VIX-based ETPs aren’t worth investing in, VIX has always been widely interpreted as a useful aid to market timing. Now, however, it seems that the volatility index by itself may be an insufficient gauge of the share market’s health, and we should all be paying much more attention to internal index correlations.