It’s peculiar to have been in the midst of the superstorm and have suffered pretty much nada in the way of immediate effects. Quite a few people known to readers of this blog are below 34th Street and are without power: our Tom Adams, Lynn Parramore, Josh Rosner, and Michael Crimmins, just to name people who’ve written for NC. Lambert in Orono, Maine, was hit by an isolated power outage, and still did Campaign Coverage from a nearby university library. I’m sure most readers know people who got a serious dose of the storm, whether in the New York metro area or elsewhere in the East Coast.

The Chicago Tribune says 6.2 million on the East Coast are now without electricity. One of the first damage reports was of a crane on 57th Street that became unmoored on the construction site of what will be the most costly condos in the city (I hope the developer gets a massive fine). All the tunnels into the city are flooded, as are major portions of the subway and the PATH train. Coney Island Hospital was reportedly the scene of a fire (later accounts are less clear as to why emergency calls went out) and NYU’s Lagnone Hospital was being evacuated due to the loss of its backup generators. There are dramatic photos of cars nearly submerged on the Lower East side, water gushing into car basements, one of the front ripped off a building in Chelsea. The West Side Highway and portions of the FDR Drive were underwater (and comments regular craazyman’s car somewhere in the East 90s got waterlogged!). Needless to say, in addition to the Rockaways (which were an evacuation zone) substantial parts of Brooklyn and the New Jersey shore are flooded, as well as parts of some commuter communities like Hoboken.

Some samples. This one of the PATH looks to be on its way to becoming iconic: 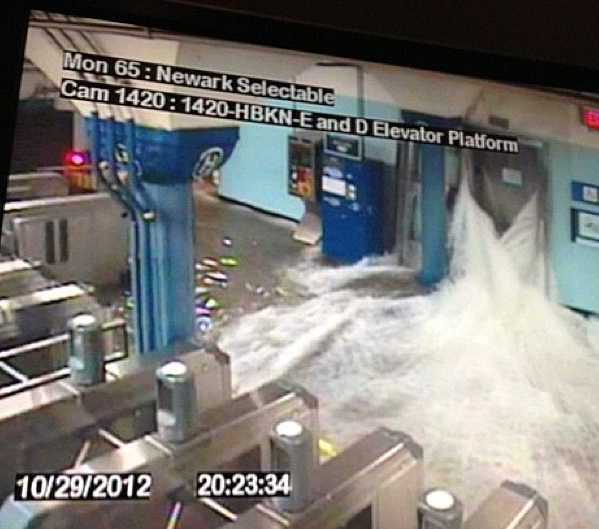 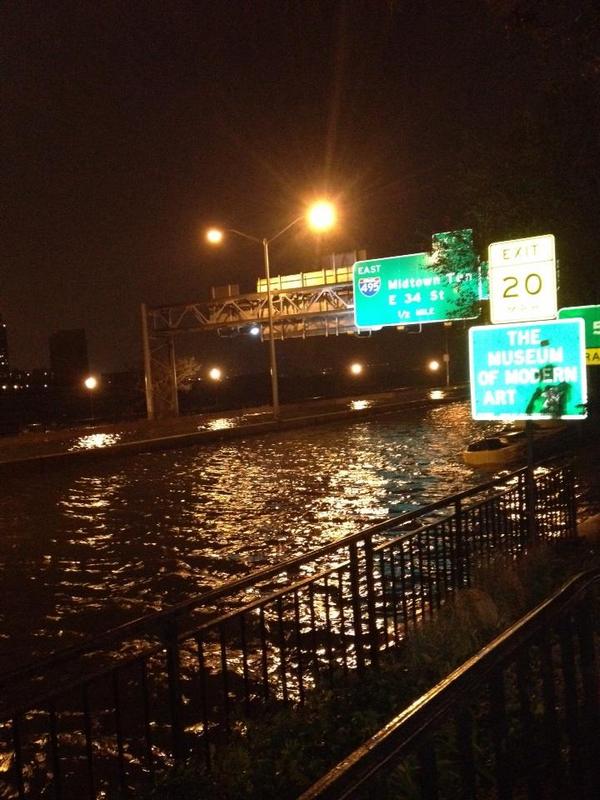 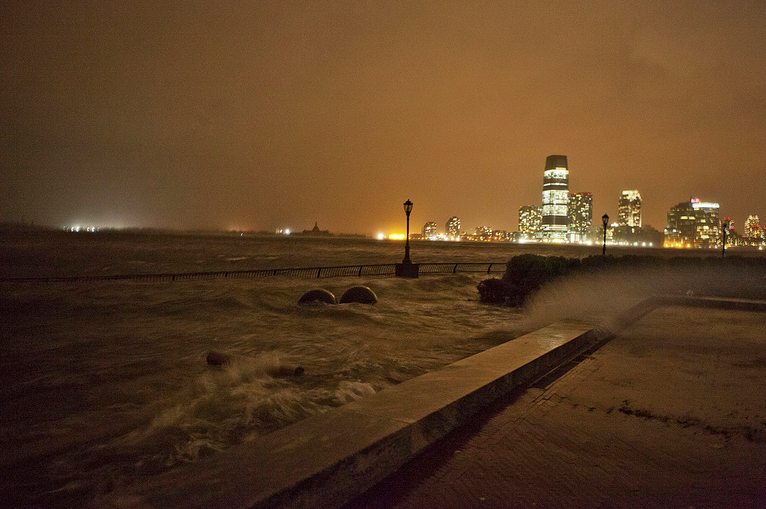 This video is of a substation at 14th Street blowing out. Con Ed has no explanation, but this was a big contributor to the blackout in southern Manhattan (Con Ed did choose to take some of Lower Manhattan down before the storm surge hit):

And a personal favorite (no verifying authenticity) of a shark in New Jersey (hat tip Lynn Parramore): 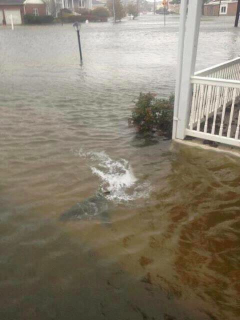 The immediate focus is on the loss of life (16 people dead so far), the dangers to safety (downed trees, hazardous roads, lack of power) and the damage to property, both damage to structures and the loss of business income (such as to retailers, hotels, restaurants, and airlines). Of course, some other commentators are already discussing whether, despite the current passion for austerianism, the devastation might lead at least to an uptick of construction spending for repairs, and maybe a bit of disaster Keynesianism, particularly if reports highlight the role that deferred maintenance and modernization played in worsening the effects of the storm. The New York Times gives an initial take:

Even as businesses struggled on Monday to gauge and contain the damage from Hurricane Sandy’s slow move up the East Coast, economists played down the likely long-term effects. The recovery after the storm, they said, could actually pump up growth temporarily in a few sectors, like construction and retail sales, when cleanup begins in earnest in a few days…

Over all, economic losses from the storm could range from $10 billion to $20 billion, according to an analysis by Eqecat, a firm that performs catastrophe risk modeling for the insurance industry and government. On that scale, big insurers might account for $5 billion to $10 billion in losses.

While the impact on New York City is not a major part of this calculation, there’s a big way the damage could last much longer, and that’s via how long it takes to get the subways fully operational again. From the Wall Street Journal:

Salt can eat at motors, metal fasteners and the electronic parts, some many decades old, that keep the system running. Salt water, and the deposits it leaves behind, degrades the relays that run the signal system, preventing train collisions. Salt water also conducts electricity, which can exacerbate damage to signals if the system isn’t powered down before a flood…

Agency officials couldn’t say how quickly the subway could be brought back into operation, but Mr. Lhota told a television crew in Manhattan late Monday it could be at least one week before service returned…

Klaus Jacob, a research scientist at Columbia University’s Lamont-Doherty Earth Observatory, wrote in a report last year that it could take as long as 29 days to pump out a full inundation of the tunnels.

Further confirmation comes via this tweet from Anthony DeRosa: MTA on the line with Weather Channel: “We have to examine the entire 600 miles of subway track before we consider even turning it back on.”

A panegyric by Bill McKibben at the Guardian mourns the damage to the subway system but weirdly misses the real significance. On weekdays, the system has 5.3 million rides on average, so if you figure an average of a bit over two (most but not all taking round trips), it easily handles over 2 million people a day. Some are commuters within the more affluent parts of Manhattan (Upper East or West Side to Midtown or downtown) who can in many cases use busses or cabs as an alternative, but a lot are from Brooklyn, Queens, or parts of Manhattan (Harlem, Inwood) where walking is impractical and income levels make cab or livery service out as an alternative. And even if the city gooses up bus service in the interim, it simply can’t move enough people to compensate.

What is going to happen to these people for the week or more while the subway is put back into service? The five boroughs has income disparity as high as China. Many of these people are modestly paid hourly workers, and some will be hit hard by the loss of even a week of income. These are the people you might or might not notice, yet are critical to the functioning of the city: the janitors, the cooks and delivery men, the people who run newsstands and dry cleaners and cobblers and food carts, the people who do secretarial and clerical work in businesses large and small throughout the city. And some are in more obviously important support roles, such as hospital orderlies, private duty nurses, home health aides, nurses and dental hygienists. And if the owners of some of these small business owners can’t get into the city and have to leave their shops shuttered or on reduced hours, they still have to pay the rent. There will be distress that will, as always, strike people who are not well placed, and here it will be by virtue of depending on the subway. The New York Times no doubt will deign to notice, particularly if the subway isn’t largely back in service relatively soon (after all, the limited availability of the service class will be visible to the upper income types that are the core of the Times’s readership; the really rich have live-ins and drivers and will be, as always, largely insulated). But will the real impact on this group be measured well and treated as a serious cost of this disaster? Pretty unlikely.

So let’s hope that the MTA chiefs are being conservative and the transit infrastructure will be back in service comparatively soon. McKibben is right in this respect:

New York is as beautiful and diverse and glorious as an old-growth forest. It’s as grand, in its unplanned tumble, as anything ever devised by man or nature. And now, I fear its roots are being severed.