By Bill Black, the author of The Best Way to Rob a Bank is to Own One and an associate professor of economics and law at the University of Missouri-Kansas City.

Greetings from Davos! I’m actually writing this over the mid-Atlantic as I return from being a keynote speaker at the annual “Public Eye” “shame prize” awarded to Goldman Sachs for its abuses. The shame prize award was made in Davos during the World Economic Forum as a counter-WEF event. Shell also “won” a shame prize, but I spoke on Goldman Sachs, the role of epidemics of accounting control fraud, and the WEF’s anti-regulatory and pro-executive compensation policies. I explained that the anti-regulatory policies were intended to fuel the destructive regulatory “race to the bottom” and why the executive and professional compensation policies maximized the incentives to defraud. I also explained that WEF was a fraud denier. Collectively, these three WEF policies contributed to creating the intensely criminogenic environments that produce the epidemics of accounting control fraud driving our worst financial crises. Detailed written developments of these arguments can be found on our UMKC economics blog: New Economic Perspectives.

Heidi Moore is the finance editor for The Guardian. She has also worked for the Wall Street Journal and Marketplace. Two of my columns have discussed the economic myths that Moore embraces to champion austerity. My first column cited her pro-austerity columns as an example of one of the central problems we face globally. Many prominent individuals who consider themselves progressives embrace austerity. Indeed, many socialists in Spain and Greece designed and inflicted austerity – producing Great Depression-level unemployment in both Nations. Much of the German left’s leadership supports austerity. The Guardian considers itself a progressive newspaper, but its financial editor is an austerian whose non-ironic, self-selected tag is “Handmaiden to Capitalism.” (Derivative of Forbes’ self-description: “Capitalist Tool.”) I entitled the column: “Deprogramming Progressives Indoctrinated into Supporting Austerity.”

My column quoted extensively from Moore’s arguments in favor of austerity and explained why her arguments, e.g., that a Nation with a sovereign currency is just like a household in terms of budgets and that cuts in U.S. federal spending were an essential response to the Great Recession were examples of harmful economic myths.

I didn’t believe that I could convince Moore to give up her passionate embrace of austerity. She has continued to push for austerity as she watched it devastate the Eurozone, so I knew I had no chance of changing her views any time soon. My second column focused on a January 4, 2013 Moore column on the so-called “fiscal cliff”, austerity, and the platinum coin. I entitled it: “The Most Embarrassing Financial Column of 2013.”

My second column was seven typed pages and, like the first column (“Deprogramming Progressives”) it quotes extensively Moore’s arguments so that the reader can evaluate their context. I then make detailed critiques, often clause by clause, of the errors of economics, logic, and fact that I believe she made in her January 4 column. Substantive criticism is a treasure, but it is a painful treasure that Moore is (understandably) not masochistic enough to treasure.

Here are Moore’s responses to my columns. 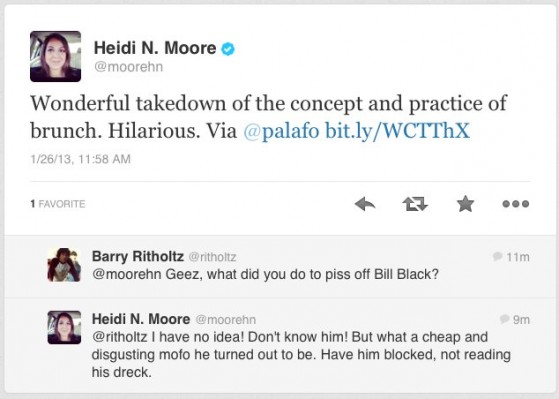 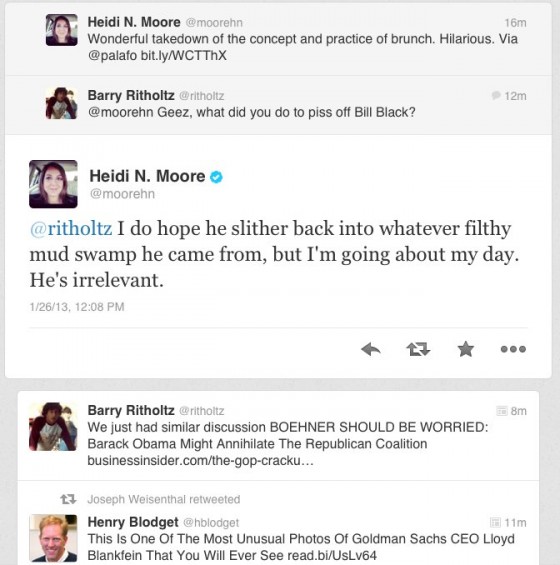 Moore’s response to substantive criticism is at least as revealing of Moore’s character and substantive abilities as were my columns. Her responses reinforce my point. She can “block” white-collar criminology and pretend that the fact that the U.S. has a sovereign currency is an “irrelevant” difference from Nations that use non-sovereign currencies such as the euro, but that will only further impoverish her understanding of the economy. That is a shame, because her pure ad hominem responses to my detailed critiques comments reveal that she is incapable of mounting a substantive defense of the austerity myths she spreads in her columns. She is disingenuous in claiming that she does know what my problem is with her work. In my columns I detailed my problems with her claims in ten pages of detailed comments. I have never met her and have no personal problems with her. My problems are with her analytics and policies, her indifference to the suffering of the tens of millions of people harmed by the austerity policies she champions, and her absorption of the dogmas of the one percent. Those austerity policies have done terrible damage to Latin America (via the Washington Consensus’ infliction of austerity) and the eurozone and would do terrible damage to America if we adopted Moore’s policies.

We will see whether Moore succeeds in blocking our critiques from reaching The Guardian’s readers and Marketplace’s listeners, but that is a sad and illegitimate goal for a journalist. Moore’s response demonstrates why many experts do not speak truth to powerful journalists who disagree with the expert’s views. When they react badly to having their dogmas exposed as untruthful their threat is that they will seek to block your views from being expressed to the public. I have recently written a piece discussing the Justice Department’s threat to Frontline because the documentary “The Untouchables” exposed the scandal of the department’s refusal to even investigate fraud by elite banksters. Like the Department of Justice, Moore does not engage in a public debate of the merits.

Moore and I have track records. Her track record on austerity is disastrously poor. Her indifference to the wholly avoidable human cost of the gratuitous damage she helps austerity spread is unworthy of her, The Guardian, and Marketplace. I will let readers judge my track record. There are several scholarly books and articles that discuss in some detail my actions as a regulator. My subsequent work and policy recommendations can be judged directly by the reader or by reading reviews of my work by George Akerlof and Paul Volcker available on line at the University of Texas Press (search for: “The Best Way to Rob a Bank is to Own One”).

My view is that our track records establish that neither of us is “irrelevant.” I believe we have been relevant, but that our policies and actions have had the opposite effect on the public’s interests and the banksters’ interests. Ms. Moore, the “filthy mud swamp [I] came from” is Detroit, Michigan. I was born in Detroit, so the “filthy mud swamp [I] came from” is one of the epicenters of the crisis. The banksters deliberately targeted less sophisticated borrowers, particularly in Detroit, to take out liar’s loans at premium yields. The banksters often mocked the borrowers they defrauded as savages in a tone that Moore mimics with her “filthy mud swamp” gibe. The banksters did this during the height of the bubble – and then grossly inflated the borrower’s income and the home’s appraised value. The banksters then fraudulently sold those fraudulently originated mortgages to Wall Street (and eventually Fannie and Freddie). Wall Street banksters then created fraudulent collateralized debt obligations (CDOs) and, with the eager aid of the rating agencies, Wall Street law firms, and auditors, they then fraudulently sold the fraudulent CDOs or the banksters fraudulently held them for the firm’s own account (which maximized the banksters’ bonuses but caused the failure of entities like Merrill Lynch – we call it “looting” for a reason). The banksters then used their political power to cripple and pervert programs that Congress intended to be for homeowner relief into programs that in the immortal admission of Treasury Secretary Geithner, were actually designed to “foam the runways” to bail out the SDIs. The banksters then committed over one million felonies in order to fraudulently foreclose on homeowners. Finally (one prays), the banksters used their political power and economic extortion to coerce immunity not only from criminal prosecution, but even meaningful criminal investigation and disclosure of their literally millions of crimes.

So, if you, Ms. Moore, want to insult where I come from as a “filthy mud swamp” – it is the banksters and the neo-liberal economic policies you have shilled for all too often during your career that made the suffering of the people of Detroit so acute and widespread. I have personally seen what your austerity policies are doing to Ireland, Spain, and Italy, and I listened at the Davos shame prize as Eurydice Bers, a Greek journalist sitting next to me on the panel, explained in detail the tragedy of what austerity is doing to Greece (including an epidemic of suicides).

I’m sure you live in a very nice place, that you interview overwhelming elite bankers who live and work in wonderful places, and that you often dine in exquisite places with them on someone else’s tab. Your contempt for those who come from or dwell in what you deride as “filthy mud swamps” is all too common among the people you have too often served so slavishly in your chosen role as the Handmaiden of Capitalism (HOC). The people of Detroit, Ireland, Spain, Portugal, Italy, and Greece do not “slither.” The trails of slime you see all about you are from your bankster buddies – elite bank fraudsters do (metaphorically) slither.

White-washing the crimes of the banksters’ and providing an anti-Greek chorus echoing their neo-liberal dogmas are the critical skills of a HOC. The chorus is often a Milli Vanilli lip-synching sycophants’ act because the banksters’ PR people always try to provide the chants that the HOCs mouth. The HOCs are proud to be “in hock” to Wall Street.

Ms. Moore, the banksters have no respect for their servants. The people you serve as a HOC hold HOCs in contempt. Once you are no longer useful to them they will make this clear.