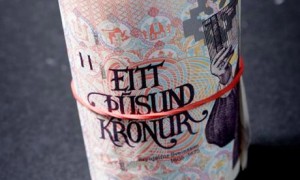 I’m slowly working my way through the material that’s coming out of World Economic Forum in Davos. I tend not to take too much attention of what is said at this particular conference as, in my opinion, it tends to be full of self-serving tripe in the most part.

I did, however, notice a small interview with Icelandic President, Olafur Ragnar Grimsson, which was quite interesting.

There are two  reasons why this is such an interesting interview.

Firstly, Mr Grimsson raises some very good points about the effect a large financial services industry on the rest of the economy. He also asks the important question as to why exactly a private bank should be treated differently from any other private enterprise even if has some strategic importance and why exactly national citizens should suffer due to poor business practices. In that regard, Iceland, much like Sweden, has become a model of what should be done after a banking crisis. In short, the aim of the game is to save the banks, but not the bankers.

There is, however, one small problem with Mr Grimsson’s points. He appears to be doing some fairly large historical revisionism in the account of what actually happened. The Icelandic government was not ‘wise’ in it’s implementation of a non-orthodox approach at all. It actually attempted to keep some of the banking system alive, including giving them money along with ‘un-lawful’ loans and part of the IMF program that came later was used save a number of building societies.

It is correct to state that Iceland didn’t bail out its three large banks that collapsed in October 2008, but this was simply because at 900% of GDP it was absolutely impossible. The Government did initially attempt to save Glitnir, but it became apparent very quickly that the central bank did not have the foreign reserves available to keep the banking system alive.

In the end Iceland did become a lesson for the rest of the world in how to best manage the crisis, but the initial response certainly wasn’t planned and certainly wasn’t due to the wisdom of the government. If you are interested in reading some future information I recommend you start here and here.