We are delighted to post the latest offering of Project S.H.A.M.E., a media transparency initiative led by Yasha Levine and Mark Ames, and now in partnership with NSFWCORP.

Author of The Bell Curve; Scholar at the American Enterprise Institute 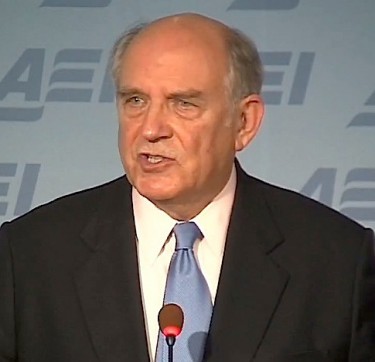 Charles Murray is one of the most influential right-wing ideological architects of the post-Reagan era. His career began in a secret Pentagon counterinsurgency operation in rural Thailand during the Vietnam War, a program whose stated purpose included applying counter-insurgency strategies learned in rural Thailand on America’s own restive inner cities and minority populations. By the late 1970s, Charles Murray was drawing up plans for the US Justice Department that called for massively increasing incarceration rates. In the 1980s, backed by an unprecedented marketing campaign, Murray suddenly emerged as the nation’s most powerful advocate for abolishing welfare programs for single mothers. Since then, Murray revived discredited racist eugenics theories “proving” that blacks and Latinos are genetically inferior to whites, and today argues that the lower classes are inferior to the upper classes due to breeding differences.

The recovered history of Charles Murray

President Bill Clinton: “He did the country a great service. I mean, he and I have often disagreed, but I think his analysis is essentially right. … There’s no question that it would work,” Clinton said in interview with NBC News in 1993.

Billionaire Charles Koch: According to the Wall Street Journal, Charles Koch named Murray as one of the “authors who have had the most profound influence on his own political philosophy.” (The respect is mutual: Murray admitted that he has “enjoyed a friendly acquaintance with both Charles and David Koch for more than 20 years” and continues “to admire their efforts on behalf of a cause that I share.”)

New York Times columnist David Brooks: “I’ll be shocked if there’s another book this year as important as Charles Murray’s Coming Apart,” wrote Brooks in 2012 about Murray’s latest book, which argues that wealthy people are wealthy because they are genetically superior to the poor due to interbreeding. “I’ll be shocked if there’s another book that so compellingly describes the most important trends in American society.”

New York Times columnist Ross Douthat: “‘Coming Apart’ is one of the strongest and most lucid explorations of the existing data on the long-simmering social crisis in working-class life,” Douthat gushed in a piece headlined “What Charles Murray Gets Right”. Among those things Murray “gets right” according to Douthat: crackpot eugenics, and the dubious notion that America is currently ruled by a meritocracy, disastrous wars and financial collapses notwithstanding: “‘Coming Apart’ offers a convincing account of how meritocracy has exacerbated the problems that Murray describes — encouraging the best and brightest to work and live and (especially) mate within the cocoons of what he calls the SuperZIPS, segregating Americans by intelligence to an unprecedented degree…”

Cato Institute Senior Fellow Doug Bandow: “Murray does not ignore or sugarcoat the tough side of liberty,” Bandow wrote in 1997, applauding Murray’s understanding that government social programs are incompatible with liberty and freedom. “Actions have consequences, and free people must bear the consequences of their actions.”

Christian Reconstructionist Gary North: North praised Murray as a writer who has “presented for us in bone-chilling detail . . . how poor people, in our own country and abroad, have been transformed by humanitarian policy . . . completely dehumanized by the programs that were supposed to be motivated by compassion.” North, a former research assistant to Ron Paul, also believes that homosexuals should be stoned to death, as should children who disobey their parents and women who have abortions or engage in “unchastity before marriage.”

Former National Review columnist John Derbyshire: Derbyshire praised him: “On the welfare state itself, which he has been studying most of his adult life, Murray is infallible.” (Derbyshire, a well-known racist, wrote a guide to what parents should teach their children about black people, which included “tips” like: “Do not act the Good Samaritan to blacks in apparent distress, e.g., on the highway.” and “Avoid concentrations of blacks not all known to you personally.”)

Libertarian Murray Rothbard: Rothbard, co-founder of the Cato Institute and supporter of David Duke, praised Murray’s Bell Curve for “expressing in massively stupefying scholarly detail what everyone has always known but couldn’t dare to express about race, intelligence, and heritability.”

Reason magazine: In 1984, Reason magazine placed Murray’s Losing Ground second only to Aleksandr Solzhenitsyn’s The Gulag Archipelago as one of the books that “had kept liberty alive over the past two decades.”

Andrew Sullivan: “I had no interest in this subject until I saw the data in Murray’s and Herrnstein’s book [The Bell Curve]. I was, frankly, astounded by it. As a highly educated person, I had never been exposed to this data. And yet, it turned out it was undisputed.” Sullivan defended Murray’s argument that intelligence is determined by race as “not racist,” writing in The New Republic: “The notion that there might be resilient ethnic differences in intelligence is not, we believe, an inherently racist belief.”

William Hammett, former president of the Manhattan Institute: “Every generation produces a handful of books whose impact is lasting; books that change basic assumptions about the way the world works (or ought to work…),” wrote in Hammat in a personal memo, describing why he thought the Manhattan Institute should bankroll Murray’s research. “Charles Murray’s Losing Ground could become such a book. And if it does it will alter the terms of debate over what is perhaps the most compelling political issue of our time: the modern welfare state.”

Charles Murray on the Issues

Murray on privatizing public education: “You may ask, ‘What about those schools in poor neighborhoods which are still just as rotten as they ever were?’ And the answer to that is: if enough of the affluent and middle class solve their education problem, the political urgency of solving that problem [ie public education for low-income Americans] will go away.”

Murray on the surveillance state: “It is possible right now [1997], I am told, to have a sophisticated bracelet on, let’s say, somebody who is on probation — on his arm — and know within a few feet where that person is 24 hours a day. So if there is a mugging on 5th and Pine, you run through all your people on probation and say, ‘Were any of these guys at 5th and Pine at 10:15 last night when this robbery occurred?’ And if they were, you take them to jail. . . . and this is just one example of many of how technology might be used for surveillance and control of criminals…or of citizens…If that technology is out there and if the public mood is sufficiently scared of crime to support it, then that technology can be implemented. And that problem would go away as well.”

Murray on outsourcing American jobs: “We are underestimating the number of [laid-off] people out there saying ‘This is great!'”

Source: Charles Murray’s speech at an event hosted by the Libertarian Party of Los Angeles County, 1997.