Market and real economic divergence continues apace in the European periphery and, much like Italy, Spain is again showing worrying signs that further fiscal tightening is creating far more severe negative consequences than “expected”. The deterioration in the economy is once again leading to a re-assessment of targets:

European Union budget enforcer Olli Rehn signaled he might seek to ease Spain’s targets for cutting its budget deficit in a retreat from the demands that helped drive the economy into recession.

EU officials will make a decision on the best pace for Spain’s budget consolidation when they deliver a scheduled assessment of the program in February, Rehn said at a press conference in Madrid yesterday.

If there has been a serious deterioration in the economy, we can propose an extension of a country’s adjustment path,” said Rehn, the EU’s economic and monetary affairs commissioner, as he sat alongside Spanish Economy Minister Luis de Guindos. “That’s what we did last year in the case of Spain.”

But it isn’t just the national government that is struggling under re-newed economic retrenchment. Regional governments are also in economic trouble and requesting life-lines from the state:

The regional government of Catalonia on Tuesday formally requested 9 billion euros ($12 billion) from a rescue fund created by Spain to save its financially beleaguered regions.

“The amount planned by the Spanish Interior and Public Administration Ministry is 9.073 billion euros,” the government of Catalonia said in a statement.

As I have noted previously, Catalonia is the not only a region with separatist history, it is also the area that has seen the largest fall in wealth from the country’s house price collapse. The latest report from Tinsa once again shows this to be the case with a 40.1% fall from peak on the Mediterranean coast, and I suspect that this is having an influence on the politics of the region.

In Spain as a whole the economic data continues to be very poor with the latest retail sales data being yet another example:

It was one of the most miserable Christmases on record for retailers in Spain as sales plunged last month in the midst of one of the worst consumer crises the recession-hit country has ever seen.

With sales tax hikes biting, unemployment growing and many workers and pensioners watching the real values of their income fall, Spaniards kept their wallets tightly closed, helping to produce a 10.7% fall in sales in December compared with the same month in 2011.

The retail slump actually accelerated, rising from a fall of 7.8% for November and an annual rate for 2012 of 6.8%. Retail sales in Spain have now fallen for 30 successive months, and the decline has quickened since the prime minister, Mariano Rajoy, implemented further austerity measures to bring the budget into line.

And, as I’ve explained numerous times previously, the ongoing economic retrenchment caused by a balance sheet recession mixed with continued fiscal tightening is manifesting in ever-increasing bad debts and unemployment: 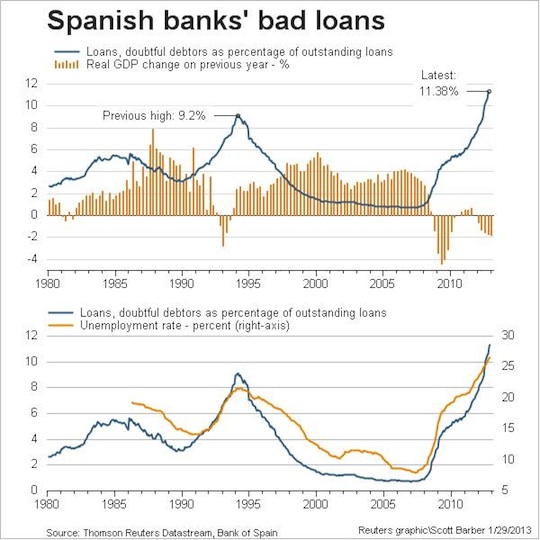 You can see from those charts we are still searching for a bottom.

As you would expect the Spanish public is becoming increasingly frustrated with the situation and Mariano Rajoy (not that this is a surprise to me, I was questioning the whole thing from day one ). This, however, is being made much worse by new revelations in the on-going Gürtel corruption affair that Mr Rajoy’s own party it knee deep in it:

The general outline of the affair was known, but not the fact that the former treasurer of the People’s Party, Luis Bárcenas, had amassed up to €22 million ($30 million) from dubious sources in accounts with Dresdner Bank in Geneva. The judge on the Spanish National Court only learned of this as a result of legal assistance from Switzerland. Even the conservative newspaper El Mundo could no longer refrain from delving into the scandal.

For as long as Bárcenas managed the PP’s finances, El Mundo writes, the politician handed party officials envelopes filled with banknotes worth between €5,000 and 15,000 every month. A former member of parliament for the PP confirmed this practice. Although accepting additional pay is not prohibited if a person declares it on his tax return, the conservatives are nonetheless worried. Bárcenas may have recorded the source of the funds in his notebooks (anonymous donations to political parties have been banned since 2007), as well as to whom the money was passed and why.

Much like Italy’s new banking scandal this one is another story to keep a close eye on. With the economy in its current state it isn’t going to take much for this story to ignite into something much bigger.