While the latest European PMI is showing some improvement it has become apparent that imbalances are growing ever-greater in the zone:

Germany – output grew at the fastest rate for just over a year- and-a-half – contrasting with ongoing downturns in France, Italy and Spain. Output in France fell at the steepest rate of these four countries, registering the fastest monthly decline since March 2009 and causing the gap between the headline indices for France and Germany to increase to the widest in the survey history.

This harps back to the original issues within the Eurozone, in which German domestic policies were a major catalyst for imbalances that began to grow after the adoption of the euro. As I mentioned again earlier in the week, France was always vulnerable under the fiscal compact given the structure of its economy, and the latest PMI data shows that is now coming home to roost: 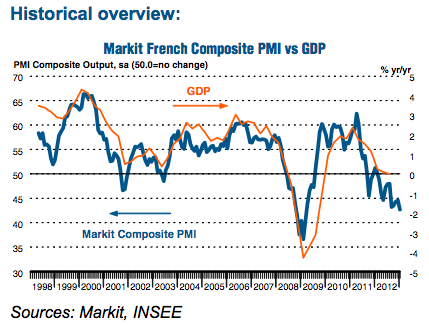 French service providers signalled a further reduction in business activity during January. Moreover, the rate of contraction accelerated to the fastest since March 2009. Incoming new business fell at a slower pace, but there were accelerated declines in both backlogs and employment. Input prices rose further, but output charges decreased at a sharper rate. Future expectations bucked the trend seen for current activity, improving to a five- month high.

The deepening malaise in the French service sector mirrors the trend seen for manufacturing, and points to a broad-based deterioration in the private sector economy at the start of 2013. Firms are clearly facing significant headwinds as clients cut spending amid heightened levels of uncertainty. Accelerated job cutting meanwhile raises concern that unemployment could be headed higher in the coming months. The bright spot in an otherwise grim set of figures is an improvement in service providers’ confidence regarding future activity, albeit remaining at a historically muted level.

The other ‘core’ country that I have expressed concern over in the last few months is the Netherlands. On Tuesday Fitch adjusted the country’s outlook to negative (full text here):

The other major rating agencies, Moody’s and Standard & Poor’s, have already put their Netherlands’ ratings on a negative outlook. The country is one of just four in the 17-nation euro zone to have kept a full set of top ratings.

“The leveraged Dutch economy has suffered a number of shocks,” Fitch said in a statement.

It pointed to a sharp fall in house prices which it said was worse than it had previously expected. Fitch recently revised its projected peak-to-trough decline to 25 percent from 18 percent, and said this will continue to depress household spending.

In other news, as I type we are waiting on the ECB to make a decision on rates, the expectation is for no action, but I suspect the comments will be interesting due to the recent LTRO repayments and what it means for exchange rates and interbank liquidity. We’ve also got a Spanish bond auction in the next 24 hours which will be the first since the Rajoy scandal broke. Lastly, there is the EU summit starting tomorrow where EU leaders will attempt to come to some level of agreement on the EU parliament budget. Richer nations are looking for cuts while poorer are looking for the opposite, meanwhile the parliament has already stated it would veto any budget it felt undermined its function. Lots of politicking ahead.