By Philip Pilkington, a writer and research assistant at Kingston University in London. You can follow him on Twitter @pilkingtonphil

When you survey the websites and the pundits of Austrian economics on the internet you tend to get a niggling feeling that they’re trying to sell you something. Of course, every writer is ultimately trying to earn a living but with many Austrians it seems to be a little different. It feels more like many are just churning certain content out in order to flog a certain line which, while certainly not quite mainstream, nevertheless seems geared toward generating if not income then at least traffic. To say that some of this comes across as spam-like would be slightly unfair, but not too unfair. After all, there is a high degree of repetition and the ultimate aim does seem to be to get the punter into the gold market or something similar.

But the sheer scale by which the fear industry has taken off is, to be frank, quite surprising. We have all seen the likes of Peter Schiff as a regular guest on the American business news spouting vague talking points about the impending dollar collapse and gold reaching $5000 an ounce. Is he trying to flog something? Probably, he does run an investment fund after all that seems to take strong and uncompromising positions in gold that have a history of losing investors boatloads of money. But beyond that one gets the impression that he just likes the attention.

The thing that really drove home to me the nature of the fear industry is an advertisement that I recently came across on Craigslist (hat tip Nathan Tankus, click to enlarge). 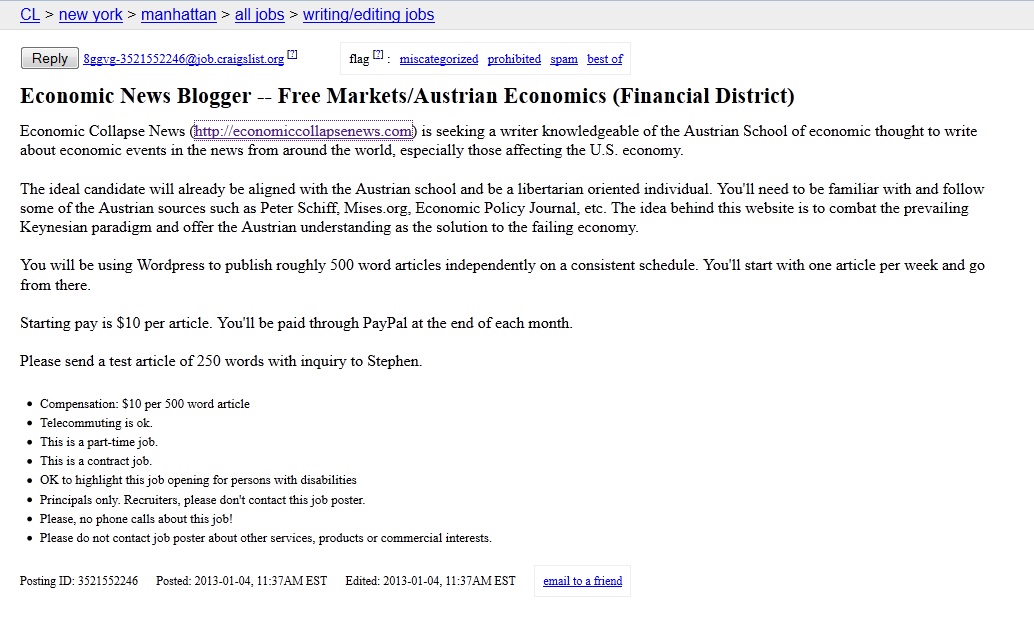 The advertisement is for a website entitled Economic Collapse News. The site itself is everything we’ve come to expect from such reputable news outlets. At the time of writing this article one of what appeared to be top feature was entitled ‘FEMA Coffins Revealed’. Presumably this was in reference to some sort of conspiracy where the Federal Government is going to set up FEMA camps where they will slaughter large sections of the population. However, when I clicked on the link to find out more about the dreaded FEMA coffins I came to realise that this was just an advertisement for food items that were going to fly off the shelves in the coming economic collapse – food items which I should, it seemed, buy from this website.

The website also contained advertisements for gold and links to Schiff, the Von Mises Institute, Lew Rockwell and Robert Murphy. Basically, this is an “apocalypse-is-coming” site that encourages the reader to stock up on guns, gold and cat food and read out-of-date economics ideas purely for the shock value and to reinforce the reader’s existing belief that collapse is nigh.

But back to our advertisement, for it is this that illustrates just how cynical the industry has become. The reader can peruse the advertisement themselves but I would highlight three dog whistle notes for the would-be writer to be sure to hit.

3. Recommendation of only the Austrian “solution” to the current crisis.

Okay, so the first requirement has two components. One of these is to have a certain political orientation. This doesn’t bother me so much. Certainly, Yves Smith didn’t ask me my political orientation when I started writing for this site – indeed, the issue has never come up – but I think if I had started writing articles championing Big Finance and bashing the unemployed our professional relationship would soon come to an end. This is the case for most media outlets. So, while it is unusual for a certain political orientation to be a requirement in an advertisement, I think we can look beyond this to some extent.

It is the second component of the first requirement that is particularly suspicious: namely, that the potential writer must be “aligned” with the Austrian School. This, it seems to me, indicates that the potential writer should think in a very specific way. This is not something that should ever be asked of a writer. Again, if a writer’s general thinking strays too far from a certain editorial line one can be sympathetic if an editor decided that enough was enough. But to require in an advertisement that the writer have a certain way of thinking appears to me something out of Soviet Russia; a sort of online Pravda.

The second requirement indicates something similar. The potential writer is expected to follow certain leaders in the field. Again there is a strong element of controlling what the potential writer is and is not allowed to say. Sure, in the mainstream media and even to some extent on the internet (Naked Capitalism, in my experience, being one of only a few exceptions) it is expected that a not-so-well-known writer don’t stray too far from the dominant discourse. But again, this advertisement indicates something altogether different. Like a trooper in the army, the writer is told exactly who their generals are to be.

The third requirement is perhaps the most extreme. It can be translated simply as: you must tow the Party Line. The would-be writer is told that there is only one solution to the current crisis and that is the Austrian solution (i.e. to deflate the economy). One suspects that what they mean here is not just that the writer must adhere to this solution but must also advocate singular personal solutions to readers that fit in with the website’s advertisers: that is, that the reader of the site should hoard items that they buy from the online store.

What is so interesting is that the fear industry grows larger and larger at a time when the make-up of their key market – the gold market – has fundamentally altered its composition. Last year the always excellent FT Alphaville ran a piece by the equally excellent Izabella Kaminska about central bank intervention in the gold market. Kaminska showed that in 2011 the central banks (represented in the chart below as the ‘Official Sector’) had increasingly come to prop up the gold market. 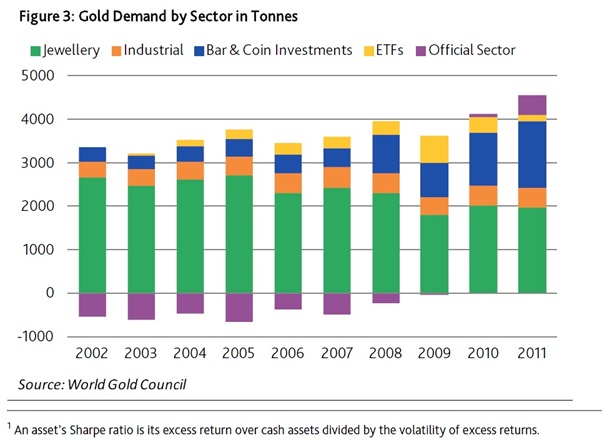 Kaminska wrote that were it not for the central banks the gold market would be largely dead because Exchange Traded Funds (ETFs) had begun piling out in 2010 – probably moving toward equities at that time. I would tend to agree with this analysis to some extent, but I’d also point to the growth in the ‘Bar & Coin Investment’ component in those years. This is the precisely the component of the industry that is supported by the Austrian School and the fear industry. As we can see it began to grow substantially in 2011, although again (and rather ironically given the ideology of these people) it would not have been sufficient to hold up the price without central bank intervention. 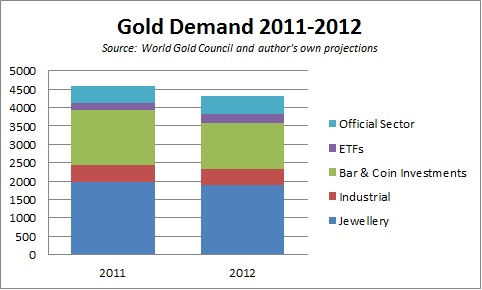 Here are the latest figures from the World Gold Council together with some of my own projections that show gold demand in 2012 as compared to 2011.

As we can see the bar and coin investment component actually shrank while the ETFs and the central banks picked up some of the slack. This indicates that the fear industry’s most successful year was actually in 2011 and this in turn is reflected in the fact that the gold price reached its record high in the summer of that year as is seen in the graph below. It would seem that the fear industry is getting a tad overstretched in its propaganda. In addition to the sort of crude advertisements we studied above, which almost certainly indicate that the industry has become hollow to the point of irrelevance, we can also see this in what can only be described as the corruption of commercial radio stations in the United States. This can be heard in the second half of this discussion of the commercial radio scene in the US in which one host refers to the gold aspect of the contemporary scene as “the gold scam situation” (relevant conversation starts around 1.50):

Yes, it would seem that the fear industry has probably stretched itself too thin and it is likely that we saw its peak last year. From here on in it will probably be diminishing returns and we’ll likely hear of more and more scams as people within the industry compete for ever scarcer resources. Meanwhile the likes of Peter Schiff, Alex Jones and the Von Mises crowd will assure their followers that the end game is just around the corner while ever more money accumulates into their own hoards which, need we say, probably do not simply consist of tinned food and semi-automatic assault rifles.

Perhaps Naked Capitalism should get in on the action while we still can. If readers are interested in water filters, maps laying out the FEMA regions across the US and high-calibre ammunition please show your support by emailing us and we might, with Yves’ permission of course, look into setting up an online store. In the meantime, onward to $5000 an ounce for gold!