Europe’s austerity-first approach has triggered research-based efforts to evaluate the effectiveness of debt-reduction strategies. This column, based on a US empirical study, suggests that an ‘austerity shock’ in a weak economy may be self-defeating. Public-debt reduction historically occurs gradually amid improved growth. If policymakers, firms and households respond as in the past, we should expect lower deficits amid higher growth and, eventually, decreasing debt ratios.

In many advanced countries, in the wake of the 2008 global financial crisis, deficits skyrocketed and public debt ballooned (see Figure 1). In fact, fiscal stimulus accounted for only a small fraction of the increase in debt, whereas collapsing revenues and higher unemployment and social benefits contributed the largest share (IMF 2011).

So, what should be done about high public debt? In our recent research, we find that fiscal consolidation and debt reduction occur gradually amid improved growth (Cherif and Hasanov 2012).1 We also show that an austerity shock (such as a sharp contraction in government spending or an increase in taxes) in a weak economic environment may be self-defeating.2 That is, there is a large risk that the debt-to-GDP ratio may be higher than in the case of a gradual fiscal-consolidation path after growth had picked up. Authors writing for Vox have argued that this point applies to Europe (see Holland and Portes 2012, De Grauwe and Ji 2013). 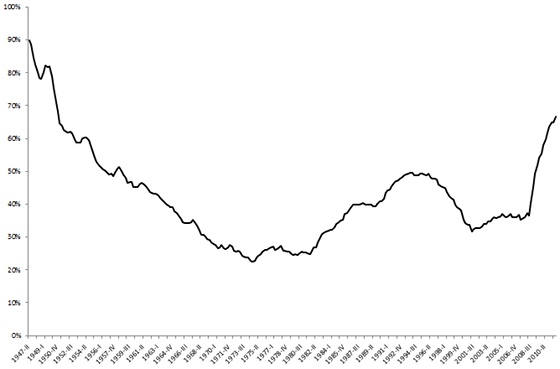 In our paper, we provide an empirical framework to analyse debt dynamics and focus on the effects of austerity, inflation, and growth shocks on reducing public debt using the US data. To study the relationship between public debt and major macroeconomic variables, we use a modified vector auto-regression framework that includes a separate debt equation as in Favero and Giavazzi (2007). The endogenous variables of the vector auto-regression model are the macro aggregates of the debt equation – primary balance, growth, average interest rate, and inflation rate. The model also includes the federal debt-to-GDP ratio (and its lags) as an exogenous variable. We compute the out-of-sample debt forecast and impulse responses of debt under different identification schemes. The impulse response to a shock is defined as the difference between the path with an initial shock and the baseline (that is, a path based on the historical pattern with innovations averaged out). We use a bootstrap methodology to compute the confidence bands.

In response to an austerity shock, the public debt ratio falls and then returns to the baseline path (see Figure 2). For instance, following an exogenous reduction in the primary deficit of 4% of GDP in one year, the debt ratio falls by about 17% of GDP in about three years compared to the baseline.3 The resulting lower growth counteracts the initial austerity efforts. Furthermore, the debt ratio eventually goes back to its baseline path implying that in the long run, the debt ratio reverts to its stationary level. In the absence of a structural break, the effect of an austerity shock on debt is not persistent. The baseline median debt path converges to its long term level (about 40% of GDP) as it already incorporates the debt-reducing dynamics of the past (lower deficits amid strengthened growth).4

Figure 2. Debt impulse response: the effect of a one-standard-deviation primary-surplus shock on the debt ratio 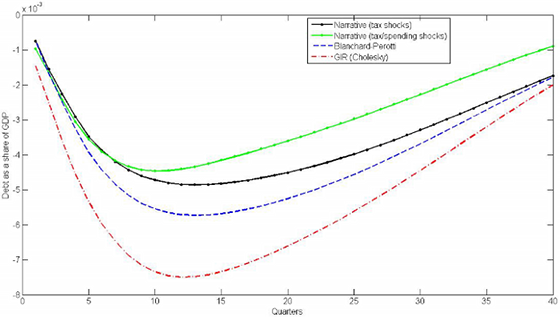 The uncertainty around the median debt path is substantial, especially in a weak economy. We compare the debt impulse response under average initial conditions or ‘normal times’ (see Figure 3) with that of 2011 initial conditions or weak economic times (see Figure 4). The impulse responses in normal times (Figure 3) show that the decline in debt is statistically significant in the first few years under Blanchard-Perotti and Choleski identification schemes. In the narrative identification, the austerity shock does not have a statistically significant effect on the debt ratio. This is true even under average or ‘normal’ conditions. Under the initial conditions prevailing in late 2011 – a weak economy, low interest rates and inflation, large deficit, and rising debt – confidence bands are wider for all identification methods than those under normal times. Moreover, the confidence interval suggests that there is a 25% chance that the debt ratio could increase in the first few years as growth deteriorates in a weak economic environment (the Blanchard-Perotti identification). Consequently, the risk of a self-defeating austerity shock is much higher in the weak economic environment than in normal times. In recessionary times, when fiscal multipliers are larger than in normal times (Auerbach and Gorodnichenko 2012), an austerity shock might result in an increasing debt ratio. 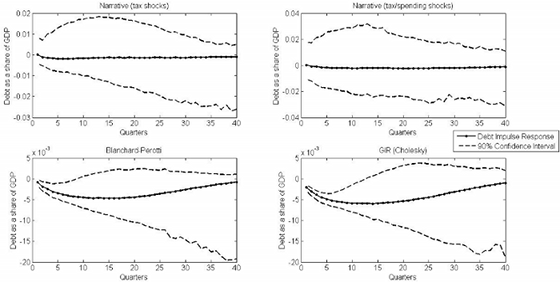 Fiscal consolidation that involves a sharp reduction of the deficit in one year is risky, and a slower pace in reducing debt should be taken. If policymakers and economic agents respond to the debt buildup and their economic environment as in the past, we should expect lower deficits amid higher growth and eventually a decreasing debt ratio in the future.

De Grauwe, Paul and Ji, Yuemei (2013), “Panic-driven austerity in the Eurozone and its implications”, VoxEU.org, 21 February.

3 The model nonlinearity implies that the magnitude and pace of the adjustment could also matter.