The Grey Lady roused itself to profile Glenn Greenwald after his blockbuster stories of the last two days: the first on a secret court order now in effect for Verizon to provide the NSA on all telephone records in its systems, the second on the PRISM program, which has given the NSA direct access to servers of information giants including Google, Facebook, and Microsoft, since 2007. But the piece is mean-spirited, underplaying Greenwald’s credentials and coming too close for comfort to character sniping.

Start with first impressions: the headline, the opening paragraph, and the picture: “Blogger, With Focus on Surveillance, Is at Center of a Debate“: 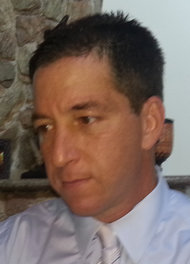 After writing intensely, even obsessively, for years about government surveillance and the prosecution of journalists, Glenn Greenwald has suddenly put himself directly at the intersection of those two issues, and perhaps in the cross hairs of federal prosecutors.

So where do we start with this? First, Greenwald is introduced as a blogger, not a lawyer, and most important, a recognized expert on constitutional law and author of four books, including New York Times best sellers. Second, the depiction of him as intense and obsessive (warning! possibly dangerous!) puts his personality rather than his information and analysis in the spotlight. And that photo!

The article mentions three times in the first four paragraphs about how Greenwald is likely to have the Administration come after him, including:

“The N.S.A. is kind of the crown jewel in government secrecy. I expect them to react even more extremely,” Mr. Greenwald said in a telephone interview. He said that he had been advised by lawyer friends that “he should be worried,” but he had decided that “what I am doing is exactly what the Constitution is about and I am not worried about it.”

But notice how the emphasis is on the risk, as in the how the authorities may stomp on him, and not a peep on how his actions benefit the public. The article, remarkably, sidesteps the elephant in the room: what does this Administration conduct reveal about our democracy and our rights? The Times authors are more interested in telling us about how Greenwald had get down the curve on encryption tradecraft to handle these national security stories. And the Grey Lady picks up on his description of himself as an activist (which per the html and the headline in the browser frame appears to have been in the original headline) and manages to downplay that the through line of his work is Constitutional issues (only two mentions of the Constitution in the piece, one in the quote above, the other from a from a former roomie).

The Times also points out how, well, irregular Greenwald’s arrangements with his publishers have been:

Mr. Greenwald’s experience as a journalist is unusual, not because of his clear opinions but because he has rarely had to report to an editor. He began his blog Unclaimed Territory in 2005 after the news of warrantless surveillance under the Bush administration. When his blog was picked up by Salon, said Kerry Lauerman, the magazine’s departing editor in chief, Salon agreed that Mr. Greenwald would have direct access to their computer system so that he could publish his blog posts himself without an editor seeing them first if he so chose.

“It basically is unheard of, but I never lost a moment of sleep over it,” Mr. Lauerman said. “He is incredibly scrupulous in the way a lawyer would be — really, really careful.”

The same independence has carried over at The Guardian, though Mr. Greenwald said that for an article like the one about the N.S.A. letter he agreed that the paper should be able to edit it. Because he has often argued in defense of Bradley Manning, the army private who was charged as the WikiLeaks source, he said he considered publishing the story on his own, and not for The Guardian, to assert that the protections owed a journalist should not require the imprimatur of an established publisher.

Now there a fair bit of straight-up-the center information included as well, for instance, that Greenwald worked for Wachtell Lipton (appropriately described as “high powered”) and his former roommate now immigration lawyer Jennifer Bailey stressing how passionate he is about “equal justice and equal treatment” and does not fit neatly into conventional political categories.

But the “fair and balanced” protocol also allows for this sort of thing:

Gabriel Schoenfeld, a national security expert and senior fellow at the Hudson Institute who is often on the opposite ends of issues from Mr. Greenwald, called him, “a highly professional apologist for any kind of anti-Americanism no matter how extreme.”

And Andrew Sullivan, who is quoted in the middle of the piece on Greenwald’s tenacity in debate, is cited again just before the close of article:

Mr. Sullivan wrote in an e-mail: “I think he has little grip on what it actually means to govern a country or run a war. He’s a purist in a way that, in my view, constrains the sophistication of his work.”

The Times, sadly, has come a long and not at all good way since the days of the Pentagon Papers. And it isn’t just the famed l’affaire Judith Miller. Recall that the Times held off on publishing information about the Bush Administration warrantless wiretap program over a year, and hemmed and hawed when pressed on the question of whether it made the decision to hold back the story prior to the 2004 election (eventual answer, yes, with some less than persuasive justifications).

Given the Times’ greater fealty to Obama than to Bush, and the dearth of any reliable American media outlets to its left, no wonder Greenwald’s source(s) came to him and the Guardian. The Times’ reluctance to give Greenwald all the credit he is due reflects its inability to face up to what his scoops say about the sorry state of American journalism.