By Sara Hsu, an assistant professor of economics at the State University of New York at New Paltz. Cross posted from Triple Crisis

In China, things are not looking pretty. Debt is high among corporations and local, provincial, and state governments—up to more than 25 trillion RMB among governments in 2012 and 60 trillion RMB among corporations in 2012. Some say debt is also high among households, but let’s face it: households still have a hell of a time borrowing from banks. Their debt load comprised close to 10 trillion RMB in 2012, and most of their income is put into savings as a cushion against adverse conditions.

Much of the debt that has gone to governments and corporations has been extended through loans, “entrusted loans,” or “trust loans.” Entrusted loans are loans from one party to another that use a bank as an intermediary, while trust loans are loans from trusts to one or multiple parties. Both of these types of loans can be securitized and sold off to bank customers, which they have been, in spades, as wealth management products.

The biggest reason that corporate and government debt is high is that income from real production has been down. Local governments wanted to look like they were producing and boosted creation of assets (often infrastructure or real estate) by borrowing through local government financing vehicles. Corporations have faced smaller income flows and have therefore borrowed to augment industrial capacity. But signs on the real economy are turning unmistakably negative despite all of this propping up of GDP, signaling a potential credit crisis in the works. Signs that the economy is turning downward include an increase in losses of loss-making enterprises and declines in industrial value added. 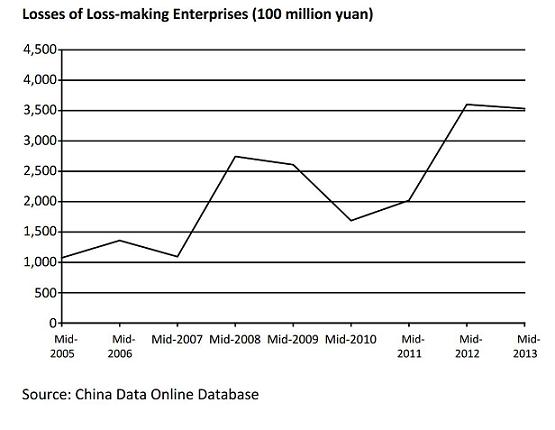 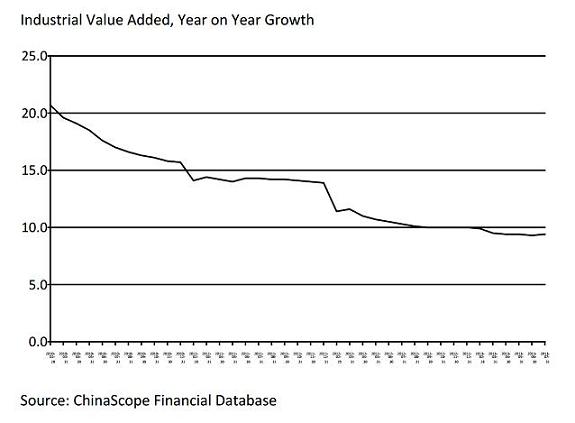 Very little of the news on China’s economy lately has been good news. Increasingly, we fear our fear is justified. A credit crisis may arise when banks and trusts stop lending because economic conditions indicate higher levels of risk.

Who will suffer from the debt crisis? Those who stand to lose include unpaid government workers, residents without infrastructure, corporate bondholders, and wealth management product customers, ordinary households that just want higher returns on their savings. Non-performing loans from corporations and local government financing vehicles would likely be taken off banks’ books (especially if the bank is of medium to large size) and be transferred to new or existing asset management companies. Ultimately unrecouped losses may the responsibility of the central government.

Does this game sound familiar? Although China’s financial economy is not as sophisticated as that in the US, during the credit crisis of 2008, it was the American people who lost their jobs while financial corporations were bailed out by the government. The latter were “too big to fail.” The corollary to that is that ordinary citizens were “too small to save.” Somehow, a similar situation has been created in China, and certainly not by accident. Financial institutions have insulated themselves against a potential downturn, while China’s citizens still struggle to lead decent lives. If and when a credit crisis appears, it will be ordinary Chinese people who lose their jobs and their savings over corporate and government mistakes.

The Chinese government’s first step in approaching a credit crunch is to prevent this type of crisis from happening in the first place, or to bring about a controlled deleveraging, as witnessed by the engineered credit crunch in June of this year. The second step should be to protect those who deserve to be protected—individuals who may lose their livelihoods as a crisis unfolds. This is also in the government’s best interest, since a sudden rise in poverty rates tends to catalyze social unrest. The third step should be to protect institutions that are systemically important, but to sanction and shrink them thereafter. Corporate managers and government officials who made the erroneous decisions that could result in a crisis should take financial responsibility for their actions, as should the lenders who provided them with the funds in the first place. The alternative is a lasting bitterness among the citizenry similar to what is now experienced in the United States.