If you are in NYC, be sure to vote for Eliot Spitzer for New York City comptroller today! As links below show, this has gotten to be a tight race, so your vote matters. I know there has been some grumbling about his past support for charter schools, but if you check the reporting on the Comptroller’s race, you’ll see the union that actually has a dog in this fight, the teachers’ union, hasn’t made any noise, perhaps for the logical reason that the Comptroller has squat to do with educational policies. The unions that have been making waves are ones like the SEIU who carry Democratic party water in return for payoffs of various sorts.

You are also getting somewhat thin links tonight (I scheduled this post to launch after I turned in). I am really trying to be on a normal schedule and the cat drama cut into my day. Apologies.

How we turned ‘tame’ cats into killing machines: Scientist claims neutering pets means felines only evolve in the wild where hunting skills are key to survival Daily Mail (Lambert). Puhleeze. As you will see below, I am a the sort of bad person who has purebred cats rather than shelter cats because an Abyssinian adopted me at a pet store years ago. Once you’ve been an Aby’s human, you get hooked on them. Abys are also one of the oldest cat breeds. The breeders have succeeded in cultivating a people-oriented personality, but the difference relative to other cats isn’t enormous, and they still are very good hunters (my older cat, Blake, was an excellent mouser when he lived a while in a 24/7 office).

Could a teenager save the world’s oceans? Student, 19, claims his invention could clean up the seas in just five years Daily Mail (Chuck L)

Observation or Admitted? The Cost of Hospital Care Can Depend on Your Status Patient Safety Blog

Is Crowdsourcing On Decline? Resilient Communications (Chuck L). Wow, if so, people are acting less like marks than I had anticipated.

The IMF knows that the Fed is playing with fire in emerging markets Ambrose Evans-Pritchard, Telegraph

The Cowboy of the NSA Foreign Policy (Chuck L)

Helicopter circles US consulate in spy probe The Local (Slashdot)

Elizabeth Warren’s Powerful Speech: Supreme Court Is on the Path to Being a “Wholly Owned Subsidiary of Big Business” Alternet

Why institutions matter (more than ever) Andrew Haldane

Antidote du jour: This is Gabriel, the cat that got stuck and was the object of considerable reader concern (thanks for all the helpful suggestions!). He’s looking annoyed because I dragged him to the lobby tonight to be photoed (I don’t have a smartphone and can’t be bothered with getting a digital camera since I pretty much never take photos). But this angle also disguises how porky he’s become. He is on his way to being an Abyssinian-colored football. 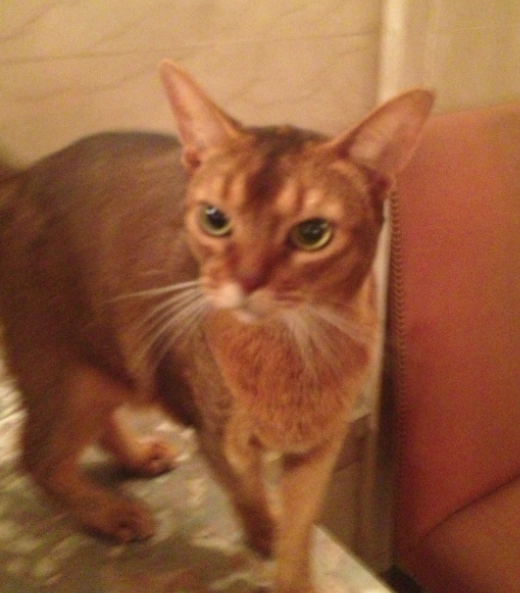