Yves here. I was extremely puzzled to see various US regulators make cautiously positive remarks about Bitcoin in Congressional hearings. One would expect them to be opposed. First, Bitcoin is a cash proxy without many of the inconveniences of cash, in particular, the fact that carrying lots of bills to complete large transactions can be conspicuous and inconvenient. That is terribly useful to tax evader and criminals. Second is that if it were to become terribly successful, it would compete with official currencies.

But I now have a guess as to what happened. The officialdom is prisoner of its ideology. Bitcoin is an innovation, ergo it must be good.

The hearings in the US senate last week were the most high profile public discussions that have taken place on the subject of virtual currencies. The US showed its openness by broadcasting the hearing, and it was watched by many Bitcoin enthusiasts around the world.

The discussion looked at the potential risks and opportunities Bitcoin and other virtual currencies pose for society, without going into any of the technical details. Senators made analogies with previous technologies and offered personal anecdotes, placing Bitcoin among inventions such as the internet and mobile phones.

Positive comments from senators, the judiciary and US financial authorities sent the price soaring to its highest price yet, reaching US$900 at one point. At the start of this year, a single coin cost less than US$15. 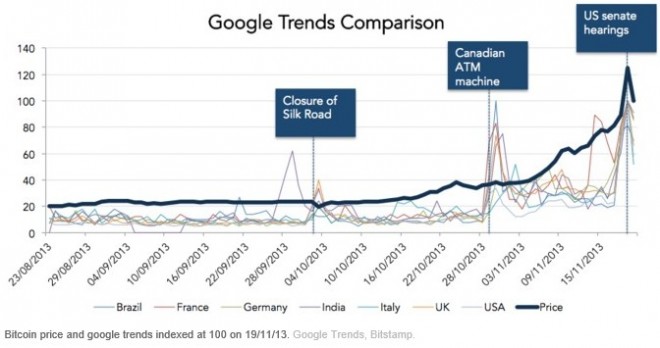 But the knowledge gap between legislators, law enforcement and Bitcoin developers is still vast. Coalitions of government agencies across borders are beginning to collaborate on addressing the gap. In 2012, the FBI founded the Virtual Currency Emerging Threats Working Group (VCET), which alongside the US department of justice and financial crime agency also collaborates with the UK’s National Crime Agency. However, at times these bodies seem to lack an understanding of the basic principles behind cryptographic currencies.

In Coins We Don’t trust

Bitcoin was conceived as a currency that did not require any trust between its users. As a result there is no room for a central authority able to resolve disputes and enforce laws.

Our traditional financial system has intermediaries that sit on top of the narrow supply of coins and notes in the economy, creating layers of credit services and other financial products. In these account-based systems, individuals trust these institutions – banks, building societies, pension funds, and so on – to keep their wealth safe. But, it is these same trust lines that also facilitate government tax collection and legal enforcement.

At the moment, Bitcoin’s equivalent financial intermediaries are the exchanges used to move money between digital and government-issued currencies. These centralised services use accounts to store users’ Bitcoin and government currencies and hence can be regulated like other forms of money transmission.

Since Bitcoin cannot be policed as effectively as normal money, most regulatory work is directed at exchanges. Enforcement within a peer-to-peer, distributed network is difficult. Take cash, for example. There is a reason why it is still the medium of exchange favoured by criminals across the world – without a centralised store and written records, it is harder for authorities to keep track. Likewise, in peer-to-peer file sharing networks, download portals and broadband providers are both subject to regulation and have the responsibility to manage content and user behaviour respectively.

This does not mean enforcement is not possible; there are considerable efforts to ensure self-regulation within the Bitcoin economy. One example is the suggestion that stolen coins should be blacklisted to prevent them from re-entering the money supply. As every Bitcoin transaction is publicly announced this is entirely feasible if the network could find a way of coming to consensus on whether the coins were actually stolen.

With the operational failures of so many exchanges and continued problems ensuring funds in online wallets are kept safe, this seems an attractive option to increase adoption of the currency. However, such moves inevitably come at the expense of true decentralisation and blacklisting is controversial among current Bitcoin users.

Without a greater appreciation of the technical details behind virtual currencies, regulation will still be limited to the exchanges that sit on top of the Bitcoin protocol. While they serve as the bottleneck between government currencies, the possibility of consumer protection or detection of illicit uses will elude the regulators.

Depending on existing legislation, countries will also vary in the ease by which they are able to adapt definitions of the currency and ownership. These details are absent from the current policy debate and actually mark the distinctive features and possible future uses of these promising currencies.