Eliminating corruption is a central policy goal of policymakers around the globe. It is known that corruption is a barrier to economic development because it increases the costs and risk of business activity, and deters investment. This column discusses a new study analysing the opposite causal relationship – the effect of economic growth on corruption. Both theoretical and empirical evidence show that economic growth causes the amount of corruption to fall.

Lambert here: As the authors admit, this article does not address forms of “grand corruption,” examples of which would include accounting control fraud, the revolving door, cognitive regulatory capture, academic choice theory, and “campaign finance.” Could it be that as national income increases, bribes indeed decrease, but “grand corruption” increases? Note, however, that their “cost of moving”-based analysis would apply (or not) below the Federal level, as jurisdictions compete for “jobs,” put contracts out to bid, persons oil the wheels and grease the skids of commerce, etc.

Eradicating corruption ranks among the central policy concerns of economic development practitioners around the globe. Then-World Bank President James Wolfenson made the case for combatting corruption in a 1996 speech now known as the “Cancer of Corruption” address. In it, he spelled out a theoretical mechanism connecting corruption and poverty:

“Corruption diverts resources from the poor to the rich, increases the cost of running businesses, distorts public expenditures and deters foreign investors…it is a major barrier to sound and equitable development” (Wolfenson 1996, 51).

Indeed, regardless of whether analysts use perceptions of corruption data collected by Transparency International and the World Bank, or individual bribe payments reported on household and enterprise surveys, there is a strong negative correlation between a country’s per-capita income and the level of reported corruption (see Figure 1 below for example). 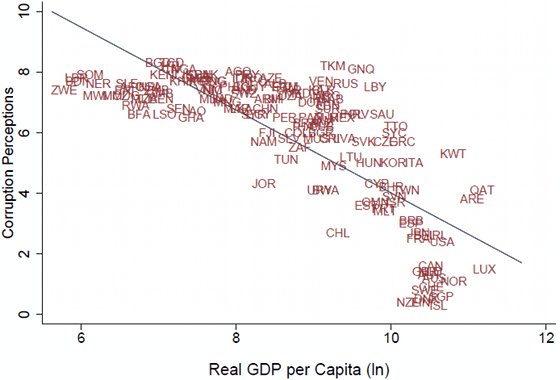 Note: This figure plots Transparency International’s Corruption Perception Index (CPI), which defines corruption as the abuse of public office for private gain on the y-axis. The CPI Score measures perceptions of the degree of corruption as seen by business people, risk analysts, and the general public and ranges between 10 (highly corrupt) and 0 (highly clean). The x-axis is the log of PPP Converted GDP Per Capita (Chain Series), at 2005 constant prices.

The traditional explanation for this relationship has been the theory articulated by Wolfenson above – corruption increases the cost and risk of business activity, thereby deterring investment and depressing growth that could have lifted citizens out of poverty (Mauro 1995, Wei 1999).

However, there is an alternative possibility that has received less attention among development practitioners and academics. The strong relationship between income and growth may result from exactly the opposite causal relationship – countries may be growing out of corruption (Tresiman 2002). Over time, economic growth reduces both the incentives for government officials to extract bribes and firms’ willingness to pay them. Some scholars of developed countries have discussed this possibility in terms of a ‘life cycle’ theory with corruption peaking at early stages of development and declining as countries industrialise (Huntington 1968, Theobald 1990, Ramirez 2013). However, there has been little work either testing for this empirical link from growth to corruption, or laying out the specific mechanisms that could generate the link.

In our paper, “Does Economic Growth Reduce Corruption?” we do just that. We provide evidence that economic growth causes the amount of corruption – specifically in the amount of bribes that firms pay to government officials – to fall. Our analysis takes advantage of subnational variation in both governance and local economic development within Vietnam, drawing on a unique annual survey of private domestic businesses operating in the 63 provinces of Vietnam. We then propose and test a theoretical mechanism that could explain why economic growth tends to lower corruption.

Our Theory: Firm Mobility and the Growth-Reducing Corruption

The key theoretical insight of our argument is that the share of bribes that officials will choose to extract as rents depends on a firm’s ability to move and set up business in a different location. Ask for too much, and firms that have the ability to do so, will simply pull up anchor and head to safer harbours. Because officials know this, they are likely to set a bribe amount that is just below the cost of moving.

Building on that insight, we show that as firms grow the cost of moving should decline relative to firm size. The fixed cost of moving becomes less expensive relative to revenue, and more and more firms have the opportunity to escape the bribe requests of officials in their locality. Corrupt officials faced with a sudden growth surge must lower their bribe rates, or face losing their key providers of employment and tax payers to competitors.

Of course, the benefits of growth are not experienced equally by all businesses. Some businesses are more heavily anchored to particular locations. Socio-cultural differences across locations, proximity to natural resources, previous experience, and limited property rights all work to constrain the mobility of businesses. Operations for which these constraints are most severe will be less able to duck bribes by moving, and will be singled out as targets by corrupt officials.

The theory we propose has important policy implications. To the extent this theoretical mechanism is important, rather than focusing on politically difficult institutional changes to combat corruption, resources might be better spent on policies that facilitate capital mobility across subnational jurisdictions. Providing clear titles to business premises, for instance, enables entrepreneurs to sell and recoup the full market value of land. Such businesses are more mobile than renters or owners with insecure titles, who risk significant losses if they try to escape corruption by fleeing across the border.

The Test: Subnational Data from Vietnam

The outcome that we seek to understand is the bribe rate, measured as firms’ reported bribe payments as a percentage of annual revenue. Consequently, we focus on the specific interaction between business managers and the government gatekeepers who have the ability to extract bribes. We calculate this from an annual survey funded by USAID and administered by the Vietnamese Chamber of Commerce and Industry.

The survey has the particularly beneficial feature of seeking to compare economic institutions across Vietnam’s 63 provinces through an annually published Provincial Competitiveness Index (Malesky 2011). The explicit focus on the province is no accident. Due to a series of decentralising reforms, the interface between businesses and government occurs at the provincial level, including business registration, licensing, land acquisition, and inspections. Focusing on bribes paid to provincial officials accurately reflects doing business in Vietnam, but it also limits worries about the confounding effects of widely divergent national cultures and histories that have dogged work in the extant literature. Naïve analysis demonstrates the plausibility of our hypothesis. Figure 2 demonstrates that the average bribe rate decreases as GDP per capita increases. More compelling still, Figure 3 shows that large firms actually pay lower bribe rates, which is what our theory predicts. Firms with higher revenues are more put out by a high bribe rate, since it increases the amount of bribes they must pay dramatically. To retain them then, officials must push their bribe rate lower.

Figure 2. Time trends and bribes and GDP per capita in Vietnam 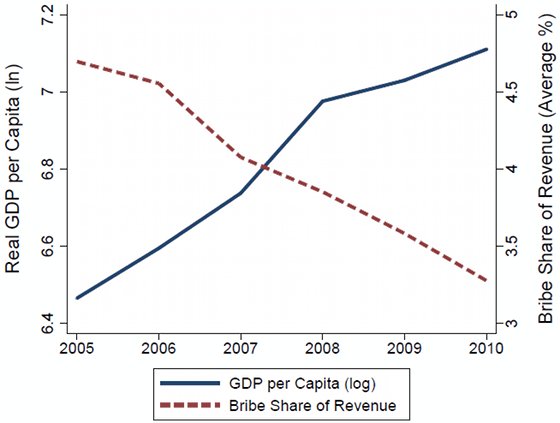 Note: This figure plots the real GDP per capita and the bribe rate paid by firms in Vietnam between 2005 and 2010. The bribe rate is averaged across all firms responding to the PCI survey in the corresponding year. 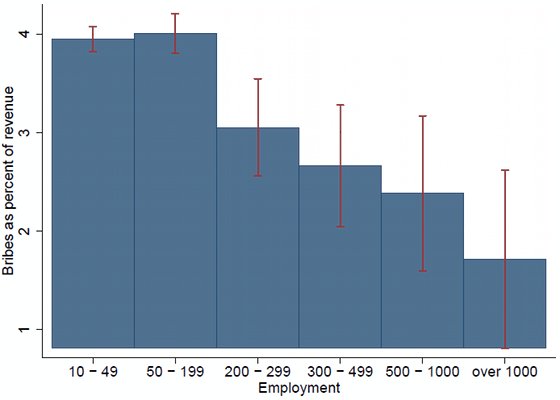 Note: This figure plots the mean bribe rate (bribe payment/revenue) for different firm size categories along with a 95% Confidence Interval.

Finding variation in growth, however, poses the next empirical hurdle. Since conventional wisdom posits that corruption reduces economic development, we need to find a way to isolate that component of economic growth that is independent of the influence of local institutions. To do this, we estimate an individual firm’s economic performance based solely on how its industrial sector fared that year in the 62 other provinces where the firm was not headquartered. To construct this aggregate measure, we use a census of firms conducted by Vietnam’s General Statistical Office (GSO) and calculate aggregate employment at the province-industry-year level.1

Using this technique, we show that exogenous industry-wide performance is indeed a strong predictor of a firm’s performance. A doubling of total employment in the industry is associated with a 1.6-percentage-point reduction in the bribe rate, or about 42% of the mean level.

Moreover, the effect is more pronounced for highly mobile firms. The magnitude of the effect of growth on bribe reductions is 17% larger for firms in possession of a Land Use Rights Certificate, which facilitates the sale of their business premises. Similarly, the effect is 20% greater for firms that already have branch operations in other provinces, and therefore possess knowledge and experience that could facilitate movement.

These effects survive a battery of robustness tests and alternative specifications, providing compelling evidence that growth can directly reduce corruption.

This decision to focus on firm bribe rates limits the scope of our findings. Corruption has a wide variety of manifestations to which our theory does not directly apply.

Further research is necessary to trace out the causal logic linking development to these other forms of corruption.