Yves here. As much as the post below is a very useful recap of data in terms of the impact of QE, I need to hector “Unconventional Economist” for being pretty conventional. His headline question, whether intentionally or not, reinforces the notion that it was reasonable to think that QE, or super low rates generally (as in ZIRP) would lead to increase lending. That’s based on a view that is very popular among neoclassical economists, which is that everything can be solved by price. It follow that if you put credit on sale, companies and individuals will consume more credit, that is, borrow more, and will therefore go out and spend more, which will produce more growth.

The more formal name for that sort of thinking is the “loanable funds” theory. It was debunked more than 70 years ago by Keynes but refuses to die. As we wrote in 2011:

In really simple terms, there is a “loanable funds” market in which borrowers and savers meet to determine the price of lending. Keynes argued that investors could have a change in liquidity preferences, which is econ-speak for they get freaked out and run for safe havens, which in his day was to pull it out of the banking system entirely. [John] Hicks endeavored to show that the loanable funds and liquidity preferences theories were complementary, since he contended that Keynes ignored the bond market (loanable funds) while his predecessors ignored money markets.

But that’s a deliberate misreading. Keynes saw the driver as the change in the mood of capitalists; the shift in liquidity preferences was an effect. (In addition, Keynes held that changes with respect to existing portfolio positions, meaning stocks of held assets, would tend to swamp flow effects captured by loanable funds models.)

Making money cheaper is not going to make anyone want to take risk if they think the fundamental outlook is poor. Except for finance-intensive firms (which for the most part is limited to financial services industry incumbents), the cost of money is usually not the driver in business decisions, Market potential, the absolute level of commitment required, competitor dynamics and so on are what drive the decision; funding cost might be a brake. So the idea that making financing cheaper in and of itself is going to spur business activity is dubious, and it has been borne out in this crisis, where banks complain that the reason they are not lending is lack of demand from qualified borrowers. Surveys of small businesses, for instance, show that most have been pessimistic for quite some time.

If you want to put it in more technical terms, what is happening is a large and sustained fall in what Keynes called the marginal efficiency of capital. Companies are not reinvesting at a rate sufficient rate to sustain growth, let alone reduce unemployment. Rob Parenteau and I discussed the drivers of this phenomenon in a New York Times op-ed on the corporate savings glut last year: that managers and investors have short term incentives, and financial reform has done nothing to reverse them. Add to that that in a balance sheet recession, the private sector (both households and businesses) want to reduce debt, which is tantamount to saving. Lowering interest rates is not going to change that behavior. And if you try to generate inflation in this scenario, when individuals and companies are feeling stresses, all you do is reduce their real spending (and savings power) and further reduce demand (and hence economic activity).

And as we’ve seen, this is pretty much what has happened. To the extent companies have borrowed, it’s primarily in a speculative manner, either to buy back stock or to hoard cash (as in the cost of borrowing is close to zero in real terms after tax, so they might as well hoard up. They can always get rid of it somehow later).

The comment above discusses the lack of small business demand for loans. Although that is the primary driver, there is a second one I’ve been remiss in not mentioning: banks are pretty much not in that business any more, and why the Fed ignores that and pretends to act as if putting money on sale will lead to more small business lending is beyond me.

The barrier to small business lending isn’t the economics; it’s that most banks no longer have that skill. I’m not making that up. In the stone ages of my youth, all the big banks (and the industry was less concentrated, so there were more “big banks” back then) had two year credit officer training programs. Those credit officers would do the analysis and make recommendations on big corporate loans. Some would eventually become branch managers, and way back then, branch managers would have the authority to approve loans up to a certain level. They used not only their formal analytical skills, but also local information about the health of the economy, the reputation and stability of important local businesses. If the local hardware store owner came in looking for a loan to expand, the branch manager would have an informed view on whether his estimates of how much and how fast his top line would increase after his build-out. He’d even probably know if his cost assumptions were realistic based on prior experience.

That capability has been abandoned in large banks. Branches are just retail stores; lending is productized and based on whether the borrower meets certain criteria set at much higher levels in the bank. You might still find the old-fashioned case-by-case type of small business lending in small banks, but it’s as dead as a dinosaur in the big ones, and the big ones dominate the industry.

From Unconventional Economist, who has previously worked at the Australian Treasury, Victorian Treasury and Goldman Sachs. Cross posted from MacroBusiness

Westpac’s Elliot Clarke has today released the below note arguing that the Federal Reserve’s quantitative easing (QE) measures have done little to boost overall credit creation across the US economy, although it may have forestalled further weakness. Household credit growth remains soft, due to limited demand from end borrowers as well as the tighter lending standards introduced in the wake of the GFC. By comparison, corporate credit creation has been mixed, with a noticeable pick-up in non-financial firms’ credit growth offset by weakness in small business lending, where credit availability remains constrained. There has also been little increased corporate borrowing to expand productive capacity.

At its simplest, the credit easing undertaken by the Federal Reserve following the GFC was intended to improve credit conditions for end borrowers, both in terms of price and availability. On the price front, the FOMC has certainly met its objective, bringing borrowing rates down to historic lows and keeping them near those levels – the impact of 2013’s ‘taper talk’ on mortgage rates being an exception. However, more than four years on from the end of the recession, credit creation in the US economy remains decidedly sub-par.

This is most obviously true for households who have remained very cautious in their appetite for leverage in the wake of the GFC. Indeed, in dollar terms, the level of household credit has remained broadly unchanged for the past two years following a moderate deleveraging episode between March 2008 and June 2011. In the past two years, we have seen one notable quarterly increase in the size of commercial banks’ mortgage books (December 2012) and a singular quarterly increase in the combined loan book of Fannie Mae and Freddie Mac (June 2013), the two conforming-loan government sponsored entities – conforming in the sense that they require a solid credit rating, a sizeable deposit (typically 20%), and the loan to be smaller than the mandated loan limit. The remaining flow of credit provided to households during the past two years has been in the form of low-deposit, low-credit-score home loans facilitated by Ginnie Mae and the Federal Housing Administration (FHA) and consumer credit. The latter has primarily been in the form of government-funded student loans, although auto-loan growth has also been supportive. 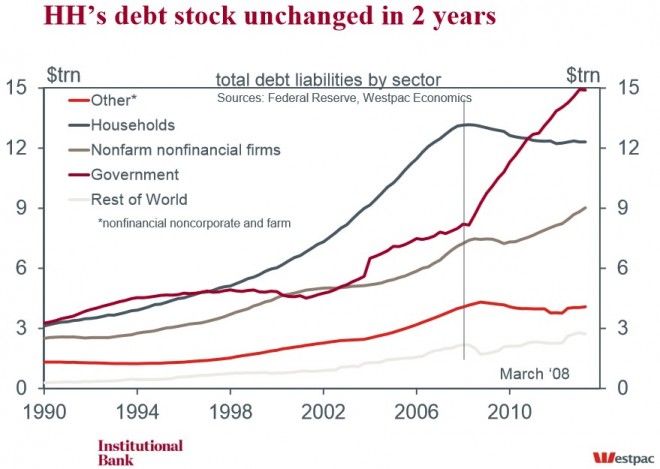 As displayed by the October Senior Loan Officers Survey (SLOS), the absence of credit creation in the household sector is the result of limited demand from end borrowers as well as the tighter lending standards introduced in the wake of the GFC which were never really rescinded. While the SLOS indicates prime borrowers have benefited from looser lending standards in the past year, this improvement is negligible relative to the initial tightening. 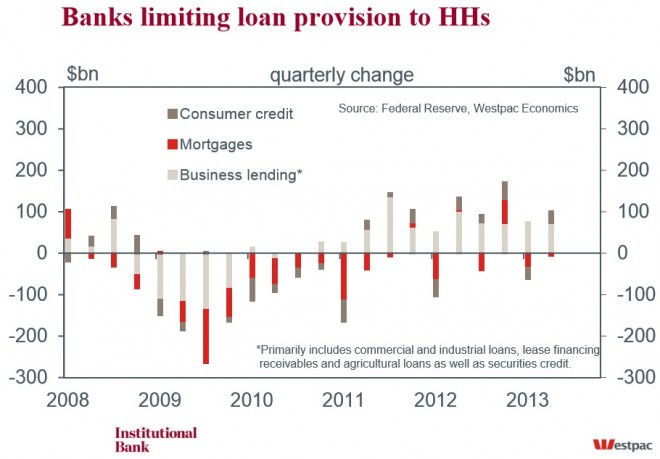 As an aside, it is worth noting that a special question in the October survey sought to assess the impact higher mortgage rates have had on household loan demand. The answers were consistent with available data on mortgage approvals, indicating a noticeable, albeit moderate, impact on purchase applications and a much larger impact on refinance applications. The timing of this deterioration also corresponds with the 5.6% decline in pending home sales seen in September. 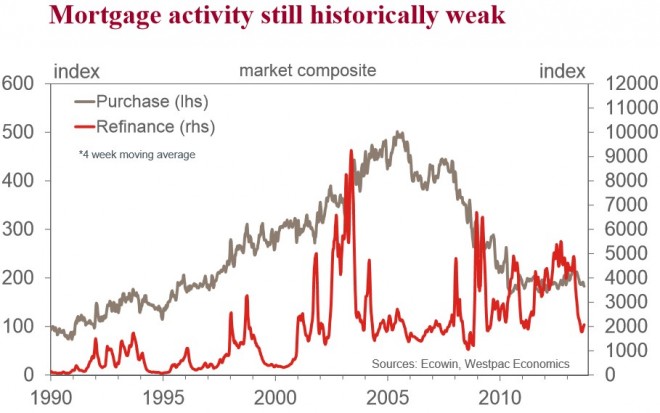 Turning to the corporate sector, there has been a much more noticeable pick-up in credit creation. Indeed, an uptrend has been apparent in nonfinancial firm credit liabilities since the end of 2009, with the pace of growth accelerating moderately over the past year.

That this acceleration has occurred at a time when annual growth in business investment has decelerated from over 9% in June 2012 to little more than 2% in June 2013 is somewhat surprising – one would normally expect higher leverage to be taken on to finance greater real investment. But we don’t have to go too far for an explanation. From the flow of funds data, it is evident that nonfinancial firms have been adjusting their financial structure, funding stock buy backs and acquisitions with borrowed funds. This is not only a recent phenomenon; it has been seen throughout the recovery. 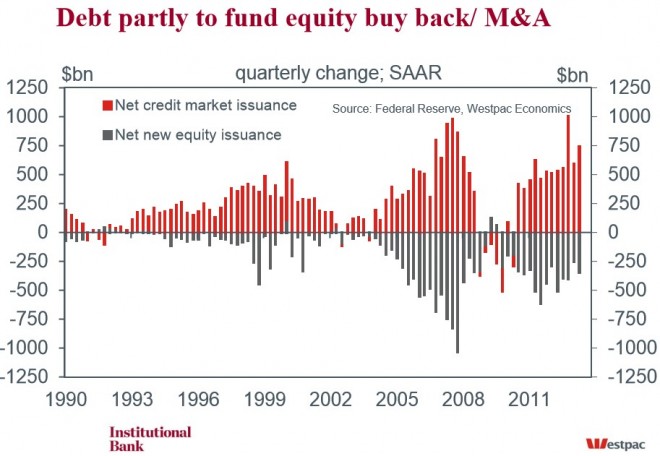 On small business lending, good information is hard to find. As best can be assessed, lending conditions for small businesses remain restrictive. The latest NFIB small business survey indicated a historically-low 30% of respondents were borrowing on a regular basis; of that group, a net 5% reported loans were “harder to get” compared to their last attempt.

This recovery’s business investment narrative then looks to have been all about US corporates maximising reported profits (both by making the financial structure more efficient and through acquisitions) as opposed to expanding capacity. It is hardly surprising then that jobs growth has remained so fickle, and that what jobs growth there has been has been focused toward household service provision instead of production and business services. That cash continues to be accumulated amongst US corporates is yet another sign of a lack of investment opportunities and a high degree of uncertainty over the outlook. 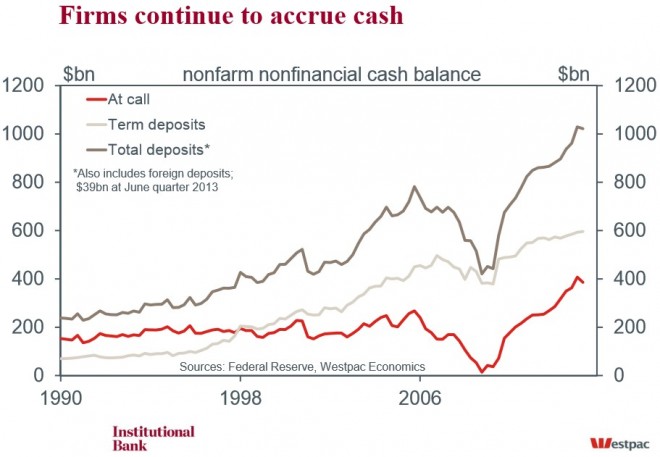 In the past we have often emphasised that, despite its end-user focus, US credit easing has failed to spark persistent momentum in the aggregate economy. Arguably, the lesson to draw from this experience is that alternative policy measures are certainly an effective way to forestall further weakness and maintain the structural integrity of the financial system. However, in and of themselves, these policies are unable to engender greater dynamism. For that, confidence and clarity around fiscal policy, household’s financial health and the broader economy are key. On each front, there is a great need for improvement.