Yves here. I’m featuring this post in part as a development exercise to Cliff, a German economist who has been blogging off and on since 2011 and plans to post on a more consistent basis. He has been warned that the NC readership can be rough.

I’m also of two minds about his argument. Initially I recoiled, because I think the personal service economy in the US has gone too far in some respects. To put it more precisely, the stratification of income has led to growth of the personal service economy, which serves to reinforce class distinctions. And Cliff takes up the fallacy that activities that are included in GDP are somehow better than if they occur outside the transaction economy. Vam Gogh sold only one painting over his entire life. Does that mean his output was worthless? Oh I guess it wasn’t only because now auction houses make ginormous amounts from his work. But per this logic, paintings that are traded often are more valuable than ones that are displayed in museums or are owned by collectors for a long time.

Married women with kids who work in professional jobs (unless they’ve managed to get a “work at home” gig, and I know all of one person who had that work well) are typically dependent on personal service workers, as in they need nannies (or at least some sort of part-time child care arrangement even if the kids are in school) and house cleaning. The big reason is the hours aren’t predictable and they often have husbands who have similar long work days. But that sort of efficiency leads to greater instability. I don’t know how many times my friends have come unglued when something happens to their nanny (illness, death of parent, or they turn out to be bad news and need to be fired). It’s really hard for them to manage while they are finding a replacement and difficult to find good caregivers.

And you’ve got the second-order problem identified by Elizabeth Warren in the Two Income Trap: having wives work means you don’t have a reserve worker in case something happens to the (presumably higher income primary worker) spouse’s job. And two income households have higher fixed expenses (the biggie is two cars, although that would probably not be the case in Germany, where public transportation is good in big cities) but they also per above need to spend more on services, thus making it harder to save).

But the flip side is that there is rampant unemployment throughout Europe, with emigration from periphery Europe to the north in search of jobs. It would be vastly better if the surplus countries abandoned their demands for austerity. Economists have argued as a next-best that northern countries will start putting more operations in the South as their wage levels fall. But that won’t provide relief any time soon. So perversely, more use by Germans of personal service workers would take up some labor slack at a time when jobs are in desperately short supply. But that seems a poor fallback to failed policies.

By Cliff, a German economist specializing in financial and macroeconomic policy analysis. Originally published at Cliffeconomics

Mowing the lawn appears to be a common pastime for Germans. Washing the car or ironing even makes it into a listing of ways to burn calories in a recent issue of the news magazine Focus. Does this make sense, economically?

Home production, i.e. productive non-market activities, are not captured in the national accounts. Time use surveys, such as the one carried out in Germany in 2001/02, show that adult Germans spend 25 hours per week on “unpaid” work, more than paid work on average.

Macroeconomic indicators may be reminiscent of the extent of home production in Germany. Labor participation, particularly among women, is low, possibly on the account of home keepers and stay-home mothers. Work hours have traditionally been lower, providing at least more opportunity to engage in home production also for those in jobs. These indicators distinguish Germany in particular from the US, where consumers are perceived to rather pay than doing stuff themselves. (For disclosure, Cliff uses dry cleaners, car washing, but doesn’t have a lawn to mow.) 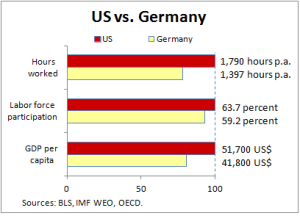 Home production may be a popular or cultural preference, economically sensible it is not. If home production would be outsourced and thus count as market activity, per capita GDP in Germany could be about 40 percent higher, possibly closing the gap to the US. Buying services instead of doing it yourself bears economic benefits: Mothers with higher education are more productive in paid work of their profession. Other home activities requiring low skills, such as mowing the lawn, could provide work for the less qualified. Economies of scale allow dry cleaners to be more efficient than ironing shirts at home can ever be.

Also from a policy perspective, home production is a blight. By remaining outside the “paid for” economy, home production escapes taxation. With the extent of public services and social safety net the same, higher home production means paid-for economic activities have to be taxed higher. This results in a coarse and inefficient redistributive effect and fosters black market activities, to the detriment of those seeking work in the formal economy. Also, home production largely escapes the scope of regulation, such as professional standards in home improvement. In contrast, regulations for paid-for services (such as by German’s craft professions) often are excessive and deprive customers of the choice of less-quality but more affordable services. (Yet, environmental laws have put an end to Cliff’s most favorite Saturday activity: washing his car on public streets.)