Yves here. With this the last week of Bernanke’s tenure as Fed chairman, it will be necessary to brace yourself for a barrage of unwarranted encomiums. Steve Keen provides a useful counterpoint, that Bernanke failed even in his own terms.

On January 31, we will bid goodbye to chairman Ben Bernanke and say hello to chairman Janet Yellen. Most commentary has focused on what Yellen’s ascendancy might mean for the Federal Reserve and the US economy, but today I’d like to consider how Bernanke’s legacy might he be regarded in future years — say, 70 years after the crisis we’re in now.

It certainly won’t be as he expected it to be before he took on the job of Fed chairman in February 2006. In the worst case scenario, he will be blamed for causing the ‘Great Recession’, just as he blamed his predecessors for causing the Great Depression.

His finger-pointing doesn’t get any more blatant than his closing remarks in his speech in praise of Milton Friedman at the latter’s 90th birthday gabfest back in 2002:

“Let me end my talk by abusing slightly my status as an official representative of the Federal Reserve. I would like to say to Milton and Anna: Regarding the Great Depression. You’re right, we did it. We’re very sorry. But thanks to you, we won’t do it again.”

Of course, Bernanke got the job he’ll soon vacate because he was perceived as the Hercule Poirot of economics, whose brilliant sleuthing solved the ‘Whodunnit?’ of the Great Depression. But a closer look (both at his sleuthing and his performance in office) reveals him to have been more of an Inspector Clouseau, whose successes, as Wikipedia notes, emanated from “frequently pursuing an idiotic theory and solving the case only by sheer, improbable luck”.

That of course is unfair, but then so too was Bernanke’s treatment of his predecessors.

Bernanke took them to task for letting the growth of the money supply (specifically, the level of M1, which largely consists of currency held by the public plus cheque accounts) fall to zero prior to the Great Depression, and then allowing it to go negative during the Great Depression itself:

“The monetary data for the United States are quite remarkable, and tend to underscore the stinging critique of the Fed’s policy choices by [Milton] Friedman and [Anna] Schwartz… US nominal money growth was precisely zero between 1928:IV and 1929:IV…

“The year 1930 was even worse in this respect: between 1929:IV and 1930:IV, nominal money in the United States fell by almost 6 [per cent].. The proximate cause of this decline in M1 was continued contraction in the ratio of base to reserves, which reinforced rather than offset declines in the money multiplier. This … locates much of the blame for the early (pre-1931) slowdown in world monetary aggregates with the Federal Reserve.”

That’s the Poirot-sounding expose of the culprit, but how does the evidence stack up?

Well, yes there was indeed zero growth of M1 (in nominal terms) in 1930, and an extended period where it fell during the Great Depression itself (see Figure 1). So there’s smoke emanating from the gun. 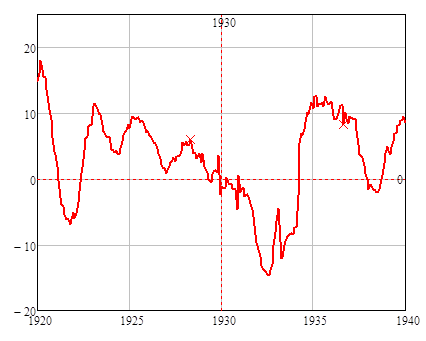 But there are two flaws in this sleuthing:

Firstly, if Ben had truly learned from both his analysis of the data and ‘Milton and Anna’, then you’d think that surely he would have ensured that the rate of growth of M1 never dropped to or below zero, wouldn’t you?

Whoops: what the data actually shows is a Clouseau-like stuff-up, with the rate of growth of M1 actually turning slightly negative after Bernanke took the helm at the Fed, and before the crisis began in 2008 (see Figure 2). 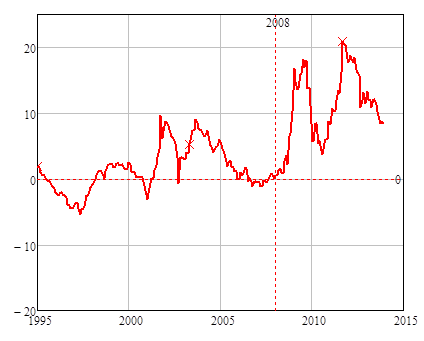 He does better in the aftermath of the crisis, when M1 explodes rather than implodes as it did in the 1930s. But there’s another, more important, problem with Bernanke’s sleuthing: to whit, who owns the M1 (and M2) ‘gun’? Bernanke argues as if the Fed has easy and direct control of the money supply, and he famously once referred to this power as its “printing press”:

“The US government has a technology, called a printing press (or, today, its electronic equivalent), that allows it to produce as many U.S. dollars as it wishes at essentially no cost… We conclude that, under a paper-money system, a determined government can always generate higher spending and hence positive inflation.” (See Deflation: Making Sure “It” Doesn’t Happen Here.)

But that simply isn’t true of M1 and M2. Those guns belong to the private banks, since M1 consists mainly of cheque accounts (and M2 adds savings accounts, time deposits and money market funds), and the change in M1 and M2 therefore depend on the willingness of private banks to make loans.

The gun that the Fed actually does control can change the level of M0, or so-called base money, which consists of currency in circulation – the stuff in your wallets – and the reserve assets of private banks. Economic textbooks – like Ben Bernanke’s – teach that bank lending is actually controlled by the Fed using two controls (the volume of base money and the “money multiplier”), but the Fed knows this a fantasy. The only gun with the Fed’s finger undeniably on the trigger is base money.

So how about that gun? Well, it remains true that the 1930s Fed let this fire negative bullets just before the Depression began, and for a while after (see Figure 3). But whereas M1 fell for four straight years from 1930 on, base money fell for only one year: from then on, the Fed was pulling on the only trigger it directly controls. It was clearly trying to revive the economy by increasing base money. 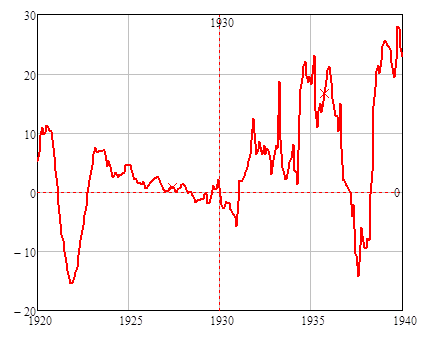 Ben also let the rate of growth of base money drop to extremely low levels before the crisis began (see Figure 4). But he pulled the trigger much more vigorously than his predecessors, once it became obvious that this was no ordinary recession. 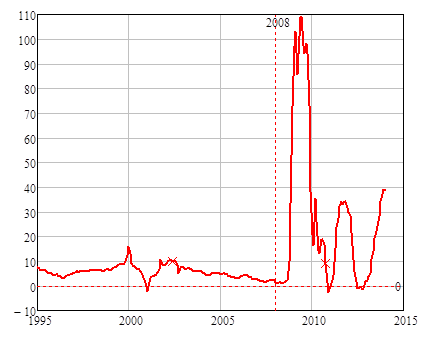 So on Ben’s own theory of what caused the Great Depression, he could quite easily be found guilty – by a future Ben Bernanke – of causing the Great Recession. The only saving grace would be that once he had made the mistake, he fought to reduce the size of the crisis. But the crisis still occurred, on his watch, and when his Fed did the very things he said the Fed got wrong in the late 1920s.