That is the question today. Let’s first ask markets. The one outstanding difference between the current global market sell-off and other “risk-off” episodes is that US Treasuries are not especially bid. Ten and thirty year yields have not budged for two days as equities and emerging market currencies have been monstered. The following chart from BofAML captures the divergence: There are no slowing taper fears here, which is especially marked since US data has been ordinary. Last night’s crucial new home sales were weak, via Calculated Risk: 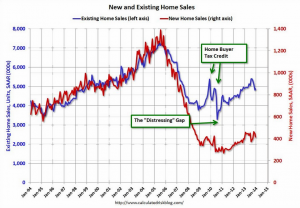 The US bond market retains its faith in taper.

However, to make things interesting and confuse a little, the US dollar has been weak and gold firm since the weak China Flash PMI kicked these dynamics off, suggesting a slowing taper: Let’s take this at face value and conclude that markets are as yet undecided.

So, let’s consider the possible channels of contagion that could see China slow the Fed down. There are four.

The first is the trade channel. The US exports roughly US$150 billion of goods to China per annum out of total of approximately $700 billion in merchandise exports. That’s not much in a $16 trillion economy so any slowdown is unlikely to be large enough to slow growth materially. Besides, the Chinese rebalancing should actually increase its imports over time as it boosts consumption.

The second channel is more significant. The US imports about $500 billion in Chinese goods per annum. And if they are falling in price because China is slowing and commodity prices are falling then that’s a material disinflationary pulse into the US economy. As I’ve illustrated before, goods are where US inflation is at its most weak: I expect Chinese inflation to remain weak and commodity prices to fall further so this is definitely a potential channel of taper slowing if inflation falls below the Fed’s comfort zone.

The third channel is China’s impact on global bond prices. The Chinese rebalancing should lead (over time)  to capital account liberalisation and considerably lower current account surpluses. In that event China will by definition be recycling fewer surpluses into foreign market investment including US Treasuries. That will see upwards pressure on yields without the Fed doing anything, though this likely a long term influence more than an immediate issue.

The fourth channel of influence is markets themselves. Will Chinese slowing infect forex and credit market stability enough that the Fed might feel contagion risk warranted slowing taper? JPMorgan asks the question:

The past two weeks have presented surprises from almost ever corner – undershoots on Chinese activity data; stress in Chinese credit/money markets; idiosyncratic developments in Russia, Turkey and Argentina; data wobbles in the US – but only the China ones meet the criteria for potentially being systemic for FX because the underlying issue is opaque and large-scale. By comparison, it is a stretch to say that the US is slowing meaningful and durably. It would also be difficult for other EMs, somewhat large as they are, to contaminate global currency markets because they lack the trade linkages to other economies.

But an issue which is opaque and large isn’t always worthy of a prolonged vol shock. (Recall all unfulfilled anxieties around the US municipal bond market post- Lehman). The situation is serious, but for that reason deserves proper context. JPM’s long-standing view has been that the Chinese authorities would continue a process of credit tapering to reduce China’s indebtedness from extraordinary levels (chart 4), and that such a process would deliver the weakest growth (ex the Lehman aftermath) in about 15 years (7.4% real GDP growth in 2014). Combined with interest rate liberalisation, tapering will also deliver higher rate volatility and possibly higher lending rates; hence the recurring spikes in Shibor such as those in June and December 2013 and in January 2014. The resulting tightening could lead to a rise in non-performing loans and defaults, such as the possible one which arose this week with a trust loan product (see Greater China Quarterly Issues, Haibin Zhu, Grace Ng and Lu Jiang, January 24).

So far, so grim. At a minimum, the baseline should be subtrend Chinese growth for another year, and it seems silly to speak of a Chinese growth upturn in 2014 as the G-4 economies lift. This outlook has anchored our long-standing negative view on China-sensitive currencies such as AUD/USD and Southeast Asia. USD/CNH is a different animal given China’s still strong balance of payments profile; we still think it ends the year around 5.95.

under scrutiny. These include trust loan products sold to high-net worth individuals, wealth management products sold to retail and local government debt. We still think the authorities are targeting a growth floor closer to 7% than to 6%, and that they possess the control mechanisms to allow

selective defaults rather than contagious ones. Hence our reluctance to see this month’s events as the early-stage equivalent of the US sub-prime crisis or Europe’s peripheral debt crisis, two events which were powerfully bullish for volatility, the yen and the Swiss franc. This week we take profits tactically on long GBP/JPY and buy CHF/SEK, but more to reflect short-term deleveraging over the next couple of weeks while Chinese credit market settle and US activity data consolidate.

This argument is right in principle, I think, but the levels are wrong. If China is to slow at all below 7% growth this year (let alone 6%) then global FX and credit market volatility will rise further. I don’t mean there’ll be a seizure, that would take a meltdown in Chinese shadow banking, but I do mean markets reverse some of their confidence in the 2014 global recovery. That will be enough to slow the Fed down as the incipient sell down in US stocks becomes a nasty correction.

I expect the Fed to proceed for now but if China does not pour forth further stimulus then taper will get more difficult with each passing month.