The salary “you must earn” to be able to buy the median home in San Francisco is $125,071 as of November, according to HSA.com. That home costs $705,000 – up 24% from a year ago (DataQuick figured the median price in December at $813,000). San Francisco tops the list of the most unaffordable cities. Next are San Diego and Los Angeles – the California trifecta – then New York City, where a mere $71,245 in income suffices to buy the median home. Households earning the median income of $51,000, well, forget it.

Housing bubbles do that. San Francisco has gone through this before. Its boom-and-bust cycles are legendary. People getting evicted and pushed out of the city because they suddenly can’t afford to live here anymore – that’s not new. But it has heated up again. The tech bubble has attracted billions in fresh money, and tax incentives are handed out to tech companies, and controversy boils over, as it did in the Twitter debacle [read…. The Day The Bubble Became Official].

Hence the allergic reaction in San Francisco to the “Google buses” (though Apple, Yahoo, Genentech, and others have buses too). These gleaming buses share taxpayer-funded bus stops with beat-up San Francisco city buses to pick up employees and haul them out of San Francisco to their campuses on the peninsula. It triggered a series of protests.

On December 9, the first Google bus was blocked. That action got a lot of national attention. So Google and the city had to start grappling with how to calm the waters. And this is what it looked like today: 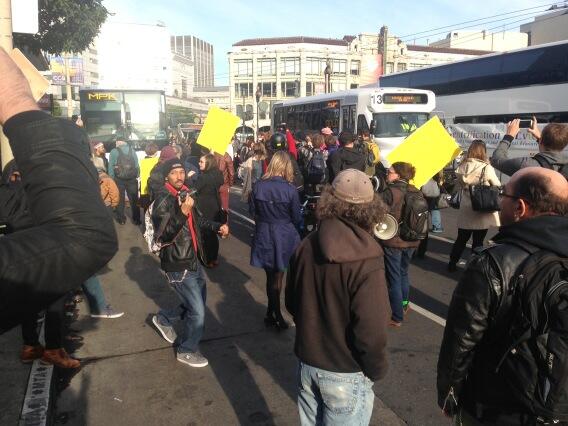 Perhaps to circumnavigate the issue, Google is testing high-speed catamaran ferries along with a shuttle from the pier to its campus. It would be harder to block them.

Meanwhile, the controversy over the buses came to a head today as the Board of the Municipal Transportation Agency (SFMTA) voted to regulate them, including charging them $1 for every use of a bus stop. So Google had sent an email to its employees who use its buses – promptly leaked to TechCrunch – to encourage them to attend the meeting. Google being Google, it had to tell them what to say: “If you do choose to speak in favor of the proposal we thought you might appreciate some guidance on what to say. Feel free to add your own style and opinion.”

Then the talking points: “I am so proud to live in San Francisco and be a part of this community”; “I support local and small businesses in my neighborhood on a regular basis”; “My shuttle empowers my colleagues and me to reduce our carbon emissions….” Etc., etc. Six of them.

In the end, it’s the housing bubble, which is in full bloom, and locals don’t want to be forced out by costs they can no longer afford. San Francisco may be extreme, but housing bubbles are now re-cropping up across the nation – and so are the very factors that helped inflate the prior housing bubble and then magnified the ferociousness of its implosion.

Home-equity loans are back with a vengeance – up 30.8% in the first nine months of 2013 from prior year and are expected to reach $60 billion for the year, the highest level since 2009 when the market was in collapse mode. But it’s still a far cry from 2006, when such loans hit an all-time crazy record of $430 billion, in a $15 trillion economy!

Using the home as an ATM cranks up consumer spending. If the money is plowed back into the house, such as remodeling a bathroom, it adds some value to the house and lowers the risk of the loan. If it is used to buy gadgets, cars, or vacations, it still cranks up the economy in the US and other countries. But when home prices decline, homeowners and banks get slaughtered.

And Interest-only home loans are back! They’re becoming popular on jumbo loans. In a number of high-cost counties, including San Francisco, these are loans over $625,500 that banks can’t sell to Fannie Mae and Freddie Mac but have to keep on their balance sheets. Bank of America said that 36% of its fourth-quarter mortgages were jumbo loans, up from 23% in the first quarter – a factor of jumping home prices. Wells Fargo, Mitsubishi UFJ’s subsidiary Union Bank, JPMorgan, City National, Bank of the West…. They’re all offering interest-only loans.

And adjustable-rate mortgages! In the Bay Area, they made up 22% of all purchase loans in December, up from 11% in December 2012, the highest ratio since July 2008, according to DataQuick. With the median home in San Francisco going for 813,000, it’s no wonder. Even households with big incomes are having trouble making payments on homes – likely an apartment – in a nicer area, which can easily cost $2 million. In the Bay Area, the median home price jumped 23.9% year over year, and in California 22.1%.

But sales volume has been plunging. In December it was down 17.7% in San Francisco and 12.7% in the Bay Area from a year earlier. In California, volume dropped 12.1% to 34,949 sales, the worst December since 2007 – and 19.7% below the average for all Decembers since 1988. DataQuick hopes that volume is down due to inventory constraints. But when the prior bubble blew up, it looked the same: volume dried up while prices were still rising. Those were among the visible cracks.

Number one is Palo Alto, epicenter of Silicon Valley craziness, where home prices are now 40% higher than they were at their prior bubble peak. What are we calling this phenomenon? Bubble? Nope. “Housing recovery.” But the middle class has hit a wall. Read…. Cracks Forming In Housing Bubble II (But This Time It’s Different)