Just the the other day, celebrity economist and 1% fluffer Greg Mankiw — sorry for the redundancy — placed an Op-Ed with the Times. I quote in relevant part:

Yes, the Wealthy Can Be Deserving

These questions go to the heart of the debate over economic inequality….

The value of making the right decisions is tremendous…. [One] case is the finance industry, where many hefty compensation packages can be found. There is no doubt that this sector plays a crucial economic role. Those who work in banking, venture capital and other financial firms are in charge of allocating the economy’s investment resources. They decide, in a decentralized and competitive way, which companies and industries will shrink and which will grow. It makes sense that a nation would allocate many of its most talented and thus highly compensated individuals to the task.

[T]he richest 1 percent aren’t motivated by an altruistic desire to advance the public good. But, in most cases, that is precisely their effect.

Let’s put on our waders and rubber gloves, shall we?[1]

But wait! Let’s look at assumptions. In Mankiw’s world, we have two classes, the rich (“richest 1%”) and the rest of us, and a relation between them: inequality. Could it be that both assumptions are problematic?

Thomas Piketty and Emmanuel Saez, of the World Top Incomes Database, have created this handy chart, suitable for placement on the fridge, if you have a fridge, that can help us question both assumptions (courtesy of George Washington’s Blog). 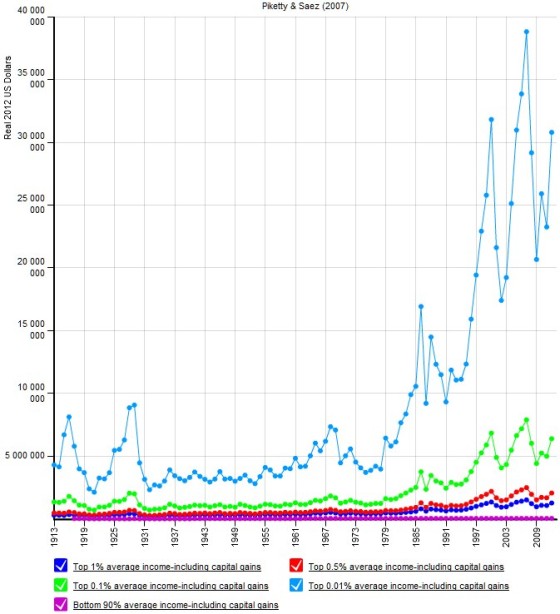 The chart undermines both Mankiw’s assumptions. First, as to classes: It’s clear from Chart 1 that there are class distinctions even within the 1%. The top 0.01% (the Waltons, the Buffets, the Kochs, in baby blue) are being “rewarded” spectacularly better than all other classes. It’s also clear, taking income as a proxy for capital, that these oligarchs enter into a very different set of class relations than, say, the executives, doctors, and bankers who make it into the top 1%. It is, after all, one thing to extract wealth from the “human resources” of the largest retail operation in the world, or from a transcontinental railroad, or a from a monopoly on a proprietary software package, as the 0.01% do; and another, and quite smaller thing, to loot a single company, collect commissions from Big Pharma, or work an accounting control fraud or three in real estate. Importantly, the chart also makes crystal clear that, for those with no access to capital (Chart 1’s “bottom 90%”, in purple), their income has been flat not merely since the neo-liberal dispensation began, in the mid-70s, but forever.

Second, as to relations between the classes, Mankiw frames his Op-Ed in terms of “inequality.” To be fair, that’s a term that pervades the political class. Larry Summers: “Inequality has emerged as a major economic issue in the United States and beyond.” Joan Walsh: “In the end, the president did mention income inequality….” WaPo: “Income inequality has emerged as a central fact of the modern U.S. economy….” Jennifer Rubin: “The right is winning the inequality debate.” And so forth. But is “inequality” the right term?

I’d argue that “inequality” is not at all the right term (unless your object is to conceal, rather than investigate, relations between classes). Citing (sadly) Wikipedia for a layperson’s understanding[3]:

In mathematics, an inequality is a relation that holds between two values when they are different (see also: equality).

It does not say that one is greater than the other, or even that they can be compared in size.

So what does “inequality” tell us? Not much. Hemingway’s famous set-up of Fitzgerald is a symmetrical relation. The rich are different than you and me, but, equally, you and me are different from the rich. Hemingway’s punchline introduces the asymmetry: Yes, they have more money. Not a ≠ b, but a > b (or perhaps $ > -$). If I fell into the pit of becoming a Walmart greeter, it would be absurd to characterize the relation between the Waltons, and me, as one of inequality: They can rent my time, but I can’t rent theirs; that’s inherently an asymmetrical relation, better characterized as (for example) exploitation rather than inequality. Oh, and to answer the question: How much? Well, too much is never enough; that’s why Arrighi talks about “endless” accumulation.

And now to the remaining substance of Mankiw’s paper.

So, first, what do the rich deserve? Or rather — reframing the question in terms that the rich would understand — how much[2] do they deserve? I’m reframing the question that way because it seems to me that the essence of neo-liberalism, the dominant ideology of the political class on upward — can be summed up in one sentence: Those who are good with money deserve longer life, and those who are not deserve to die (to be fair, in the aggregate, they deserve to have their life expectancy shortened). That’s how things played out in Russia after “reform,” anyhow! You can see this idea play out very precisely with ObamaCare; if, rat-like, you demonstrate the ability to navigate the maze of the Exchanges successfully, you will be rewarded with better medical care which (one hopes) will translate into longer life; at least in the aggregate. Single payer doesn’t select for people being good with money which is why, from the neo-liberal perspective, it’s immmoral. You can also see the same idea play out with disemployment and economic stress generally.

And second, why do they deserve it? Mankiw presents two arguments. First, risk. Re-quoting Mankiw:

Of course, that fits with the essence of neo-liberalism as I’ve described it. Since those who risk their lives, as opposed to what’s really important — money — aren’t rewarded with any wealth at all:

The Riskiest Jobs In the United States

That’s funny, I don’t see finance in there.

Those who work in banking, venture capital and other financial firms are in charge of allocating the economy’s investment resources. They decide, in a decentralized and competitive way, which companies and industries will shrink and which will grow. It makes sense that a nation would allocate many of its most talented and thus highly compensated individuals to the task.

Right, right. These are the clowns who allocated a shit-ton of capital to building whole counties full of homes with stucco-covered styrofoam pediments during the last housing bubble, which culminated in the largest upward transfer of wealth in world history. From a public purpose perspective, collective decision-making by the FaceBook — heck, the MySpace — long tail might well have yielded better outcomes.

Anyhow, forget the 0.01%, the squillionaires; what could any human being, let alone a Walton, do to “deserve” controlling wealth equivalent to the income of 42% of American families? Nothing. It’s absurdly disproportionate, wretchedly excessive, a gold bar The Money God made that’s too heavy for Him to lift. So how about the 1%? Take the executives — please! What do they they do to deserve their wealth? As it turns out, exactly one thing:

Bloomberg reported earlier this year that the ratio of CEO pay to worker pay has increased 1000% since 1950. Fortune 500 companies pay their chieftans 204 times the level of average worker pay, versus a mere 20 times in 1950 and 42 times in 1980. Is it really five times harder to run a big company now than in 1980? It’s one thing if CEOs were the ones that had built important businesses and taken entrepreneurial risk. But the Bill Gates and Sergey Brins of this world got really rich on their shareholdings. CEOs, by contrast, inherit businesses with established franchises. And the idea that paying more buys you more talent is spurious. If you were to say that paying more for a house makes it a better house, you’d see how this rationalization is a form of magical thinking. Studies have found no correlation between CEO pay and results. Quite a few studies have found the correlation to be negative (here, here and here, for instance). And forget about the myth of the superstar CEO. Lucian Bebchuk, Martijn Cremers, and Urs Peyer analyzed what they called the CEO pay slice, which is the proportion the CEO took of the total pay of the top five execs that went to the CEO. The more the CEO took relative to the rest of the top team, the worse the company did. But CEO pay is strongly correlated with one metric: how many people they fire.

That one thing the 1% does to “deserve” their wealth? That’s right: Class warfare, pure and simple.

Inadvertent vs. nefarious plot is a common strawman. A class analysis is vastly superior. It explains how members of a group can act together without specific and continuous guidance, that is with only general and intermittent points of contact. In other words, you don’t need smoked filled rooms and finely plotted conspiracies to get the result we see (which by the way is not to deny there can be a few smoked filled rooms here and there). The basic point is that while members of the rich and elites may jockey for position and sometimes work against each others’ interests (giving the appearance of lack of uniformity and coordination) they work against our interests virtually all the time.

NOTE [1] There are really too many fish in Mankiw’s barrel to shoot, so I skipped over “most talented and thus highly compensated.” Yeah, you know. Like Vincent van Gogh. Or Ignaz Semmelweis. Or Donald Knuth. Breathtaking.

NOTE [3] The layperson’s understanding of “inequality” is appropriate for an Op-Ed.